The Legend of Bill Barilko

Since the time I started skating at 3 years old, I have always loved hockey. There are few things (if any) in life that make me as happy as when I’m playing hockey. When I’m out on the ice I never want to leave. Sometimes after my games are over, another team needs a player and I’m always the first person to volunteer to play another game.

One hockey story that always sticks in my mind is that of Bill Barilko. Bill Barilko scored arguably one of the most memorable goals in the history of hockey. It was almost 3 minutes into the first overtime period in the 5th and final game of the Stanley Cup finals in the 1950-51 season against Montreal and Bill shot the puck at the net from the top of the face-off circle. As the puck was approaching the net, his skate caught a teammate’s skate and he was airborne while watching the puck go into the net and winning the Stanley Cup for the Toronto Maple Leafs. The summer after scoring the historic goal to win the Cup, Bill was returning from a fishing trip on a single engine plane, but the plane never made it home. Massive search efforts for the crashed plane yielded no results and unable to accept tragedy, the Toronto Maple Leafs left his equipment in its usual spot at the opening of the 1951 fall training camp. It wasn’t until 1962 (11 years later) that the plane wreck was discovered, and coincidentally the same year that the Toronto Maple Leafs won its first Stanley Cup since Barilko’s disappearance. 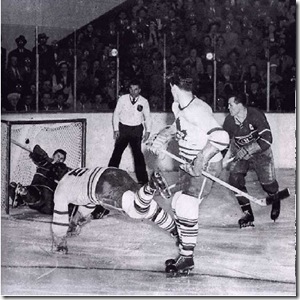