Last night I successfully completed my 260K for Kids ride. I have to admit that I underestimated the difficulty of the feat, and I don’t plan on doing anything like this again for a while. The first 2.5 hours of the ride were amazing; the wind was on my back, and I was maintaining a pace of 25-35KM/hour. After rounding the Western side of Lake Ontario, I was met head-on with fierce winds. At this point I knew that the second half of the bike ride would be very difficult. The wind was something I never really thought about, but it really does impact the ride. I was struggling to maintain a pace of 15-20KM/hour and the peddling was extremely difficult.

After taking many breaks on the second half of my first trip, I managed to climb the Niagara Escarpment and arrived in Welland 7 hours after leaving Toronto. I figured the ride probably took me just over 6 hours, with an hour or so of breaks. When I arrived I felt like my body was going to fall apart, every muscle in my body seemed to be in pain.

After getting a good night’s sleep Saturday night, I left Welland at about 12:30PM. I decided to take a different route home, which would be substantially longer than the path I took on Saturday, but it would be mostly paved bike trails, which is much more interesting than flat endless roads where cars are buzzing by at over 100KM/hour. When I first sat on my bike seat on Sunday afternoon, I knew it was going to be a painful ride. Since I didn’t buy bike shorts or a gel seat, my butt felt like I had just got out of jail. It was extremely uncomfortable the entire ride.

I took the paved trail along the Welland canal on the way home, and then mostly followed the waterfront route and the QEW North Service road across the Niagara vinyards. (The Service road was painfully boring, and frustraing watching cars zip by on the QEW). I took quite a few breaks on my way home as well trying to stretch my legs and rest my buttocks fairly often. While passing through Mississauga I stuck to the “Waterfront trail” which mostly didn’t go along the waterfront, but instead it zig-zagged through housing subdivisions, seeming to be twice as long as sticking to a straight road such as Lakeshore Blvd. When I was approaching Port Credit, I decided to ditch the waterfront trail and stick to Lakeshore Blvd, which probably saved me a substantial amount of time.

I arrived home at 9:13PM, a total of 8 hours and 45 minutes after leaving Welland as a result of my many stretching breaks and my longer route. But I am happy to say I did it, but if I ever do it again I will be sure to train next time and also purchase bike shorts or a gel seat. This would have made quite a difference.

Here are some pictures: 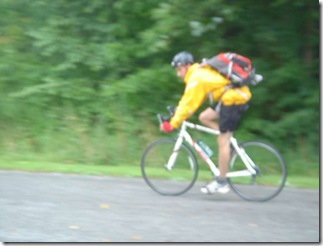 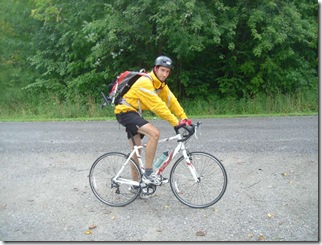 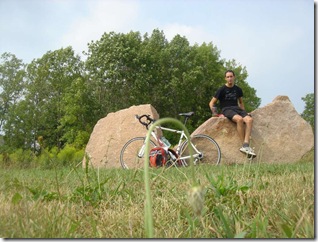 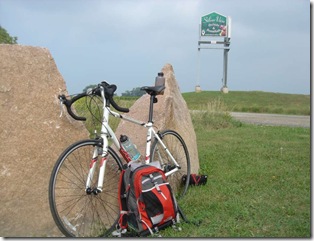 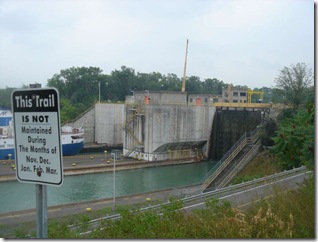 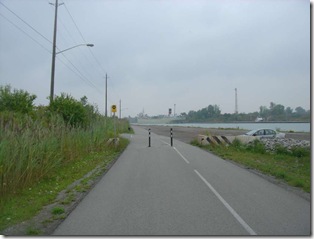