Dick Cheney recently criticized Nancy Pelosi for suggesting a gradual withdrawal of the United States; likening a withdrawal to “validating the al-Qaida strategy”. At the same time, Mr. Cheney has applauded Britain’s decision to withdrawal 1600 troops from Iraq as an indication that things are going very well in Iraq. How much can DICK Cheney contradict himself? This just shows you how Dick Cheney will do anything he can to distort a fact.

Mr. Cheney has been living in a fantasy land since he led the neo-Conservatives in his quest to control the Middle East. When you watch this interview with Lynne Cheney, you will see that even she is completely out of touch with reality. Even at a time that President Bush is becoming more of a realist (Read: He’s been left with no choice but to admit fault), Cheney is still convinced that there is victory in Iraq for the United States and that the “terrorists” will be defeated.

I’m still trying to decide whether Cheney really believes what he preaches, or whether he is trying to save face. People in similar positions probably realize they have messed up and are naturally defensive as a result. If the United States decides to withdrawal after his term is over, I don’t think he’d waste any time in trying to shift the blame of the failures to the newly elected government instead of accepting any blame himself.

Even Cheney’s hunting partner whom Cheney shot last February was probably at fault for coming up “unannounced” before being shot by Cheney. 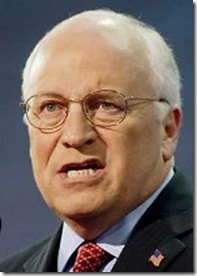