I have just concluded my first week in Alberta. To be honest, I don’t see anything too special about Calgary that sets it apart from other great Canadian cities other than the oil boom, the high demand for workers, and the Stampede in the summer. I do find it interesting that most restaurants (Including fast food chains) are paying $16 an hour because there is such a shortage of workers here.

By driving a couple hours outside of Calgary, you really start to see what the big deal is about this area of Canada. The natural beauty here goes beyond any words that I’m capable of using to describe it, so I have included some of my favourite pictures from the weekend below this article in the order they were taken. But first, I will describe my weekend adventure (For those readers with short attention span, please feel free to skip to the pictures).

Chapter 1 – “You can’t get to Lake Louise tonight son”

My adventure started out by taking the bus from the Calgary airport to Banff on Friday night after work. My feeble (but intentional) preparation in finding transportation from Banff to Lake Louise had me slightly worried when the bus driver told me there is no bus that goes to Lake Louise from Banff. So after a bit of scrambling and a bunch of phone calls, I found a Greyhound bus that leaves Banff at 12:50AM to head to Lake Louise. I had called the Hostel I was staying at to inform them that I won’t be arriving until 2AM and they seemed okay with that.

The bus left Banff about 30 minutes later than scheduled, but luckily there were 2 Japanese girls who were also waiting for the bus; they were headed for Vancouver. They taught me a bunch of basic Japanese phrases that may come in handy if I ever travel to Japan. The bus was almost full and I only had 2 seats to choose from. I picked the first one I saw and asked the gentleman if I could sit down next to him. He complied and quickly started chit chatting with me. One of the first things he told me is that he just got out of the Penitentiary in Kingston after being behind bars for 10 years. It was quite the revelation to make after just meeting somebody (I didn’t ask him what he was in for; 10 years in jail in Canada must be a pretty violent crime or maybe he was a drug dealer). He then told me why he was on the bus; since he was released from prison, he’s been “walking” across Canada. In his latest “walk”, he walked from his home in Hope, British Columbia to Winnipeg, Manitoba (That’s a 2,196.8KM walk). He said his girlfriend called him and told him to come home, so he started hitchhiking home when a man who picked him up bought him a $178 bus ticket for him to get back to BC. He told me he had already gone through 2 pairs of shoes since he left British Columbia. He went to sleep after we had some conversation and his butt kept pushing me further off the seat. By the time I got off the bus I had one cheek on the seat and the other hanging off the side. He was also convulsing in his sleep with his elbow pushing into me. It was a bit creepy so I got the hell off that bus very quickly.

I arrived at the hostel more than 30 minutes late because of the bus, so when I got there all of the hostel doors were locked and there wasn’t a person in sight. After knocking on doors and waiting for 20 minutes, I was ready to call it a night and lay down outside the hostel door. As I was putting on my warm clothes, I saw some guys walk around the corner; so I asked them how the hell I can get into the hostel. They told me that around back in the building next door there is a reception desk for the hostel. As it turns out the reception desk is open 24 hours; my night was saved.

I spent Saturday snowboarding all day until the lifts closed down. It was a lot of fun and my favourite part was taking the “Summit Platter” up to the highest peak of the mountain. Because it’s such a steep grade and your body is being pulled by a “platter”, it’s quite a bit of work to get up on a snowboard, so I only went up there twice. The scenery was amazing, like nothing I’ve seen before. I attempted to record a video going down the hill from the Summit Peak, but after I got to the bottom I realized my glove was covering most of the camera lens, so the recording didn’t work out as expected. I’ll try again next weekend to record my descent.

After I finished snowboarding, I went for a 3-hour hike and checked out Lake Louise. Apparently the water in Lake Louise is fed off of a melting glacier, so the water is always cold in the Lake. I found it very interesting to learn that Lake Louise is 70 metres deep. I’d love to see it in the summer some day.

On Sunday I decided not to snowboard again, but instead take a trip out to Golden, BC to do a snowmobile tour on the Rocky Mountains. Despite the fact that snowmobiles are high polluters with their 2-stroke engines, this is definitely an adventure that everyone should experience at least once in their lives. It had been over 10 years since I last rode a snowmobile, but this snowmobile trip tops any other snowmobile experience I’ve ever had. First of all, the tour guides were amazing and the people who wanted to go fast (myself included) were allowed to really open up the snowmobiles on the trails. Words can’t describe how amazing it was to be able to ride a snowmobile up a mountain on a narrow ledge with dozens of breathtaking mountains in view (Click here to see a video I took while riding along the side of the mountain). 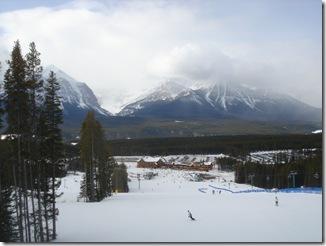 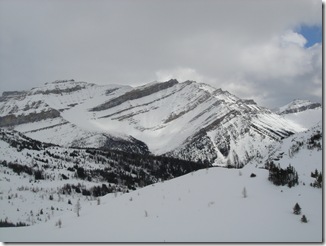 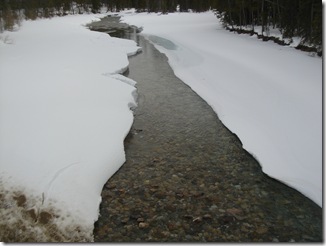 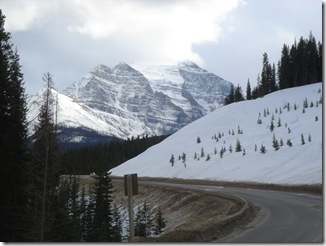 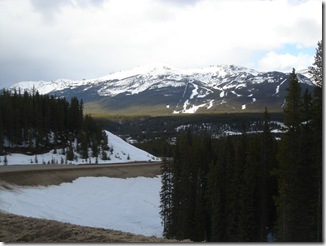 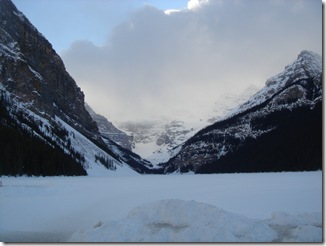 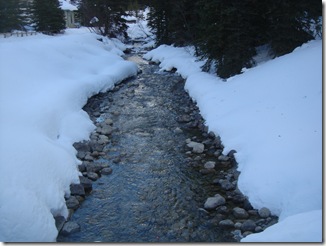 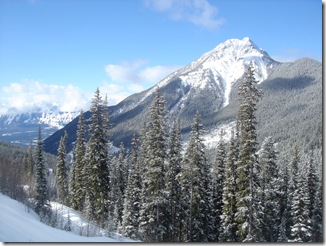 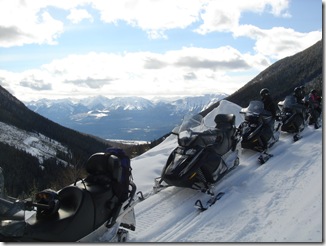 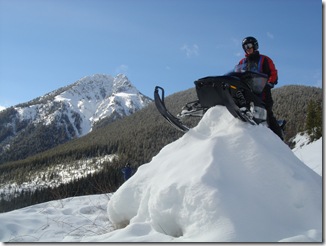 Movies watched this weekend: “Into the Wild”, “The Assassination of Jesse James by the Coward Robert Ford”, “No Country for Old Men”