If you’ve been watching the news over the last couple weeks, you are aware that 416 children were seized by police in Texas from a Polygamous sect of the Fundamentalist Church of Jesus Christ of Latter Day Saints. In Canadian news, the British Columbia attorney general Wally Oppal will be making a decision soon on what to do with a polygamous community in Bountiful, BC.

The 416 children seized in Texas are currently being held while the 3 mothers and 1 father are being investigated for abuse. The third wife’s 22nd child made the original complaint and the father was taken into custody while obtaining a loan to pay for all the diapers for his children. After being taken into custody the children were fighting over who would inherit the father’s savings after he died (They decided to split it 416 ways). One child commented that he was extremely happy to finally have a bed to himself after sharing his bed with his 8 brothers for most of his life.

Reports also indicate that Michael Jackson was spotted escorting the children from Fort Concho, where they had been held since being taken from their ranch earlier this month, to the local coliseum, where some children have already been staying. He’s apparently writing a new song called “It doesn’t matter if you’re the first or the 33rd”. 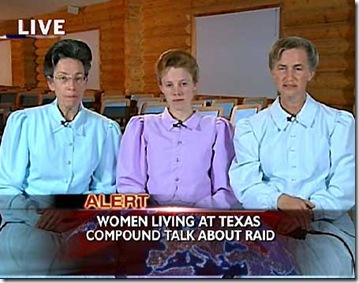