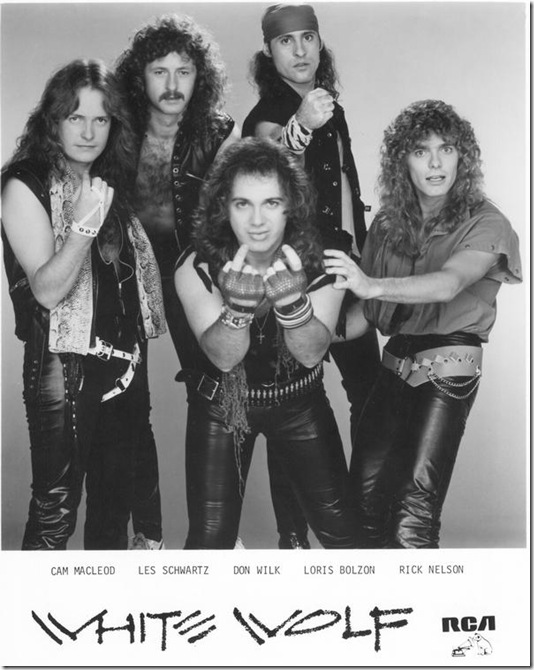 Back in 1980, a band was formed in Edmonton Alberta called White Wolf. Many remember White Wolf as a talented, yet underrated Canadian Heavy Metal acts of the 1980’s. In 1984 they signed with RCA and their debut LP “Standing Alone” which went on to sell 250,000 copies worldwide.

The band enjoyed much success and toured North America and were featured on radio stations across the nation as well as Much Music in Canada and MTV in the United States.

In 1985 they flew to Holland to record their second album “Endangered Species” which was released in 1986. The album was sitting at #114 on the Billboard charts, heading to break 100 when their record label RCA was purchased by BMG.

Sensing a lack of support after the record company merger, the band went their separate ways in 1988.

With the rise in popularity of 80’s music this decade, White Wolf resurfaced in 2007 with former members Don Wilk and Cam Macleod reuniting to release their third album “Victim of the Spotlight”. Wilk has since changed his legal name to “Don Wolf” and he and Macleod have been touring Europe to promote their new album.

The band has recently re-issued a double digipack of their first two albums “Standing Alone” and “Endangered Species” and are selling their live in Germany performance on their MySpace page:

“White Wolf are legends, make no mistake and this is a worthy addition to your collection. With the 2007 release of the third White Wolf album “Victim of the Spotlight” (ESM155) and the reissue of the two earlier albums then the future is bright for this Canadian six piece.”

“The Wolf shall prowl once more…….this is a fantastic live performance and essential for anyone wishing to experience the sheer power of this magnificent hard rock band.”

Given that my father’s brother was an original member of the band, I’ve always been delighted when I meet people who grew up in the 80’s and were fans of the band. It’s also great to see the band has been partially re-united to preserve the history of Canadian Hard Rock.

Here’s the song “She” from the 1986 album “Endangered Species”