In the Shadows of Taller Men 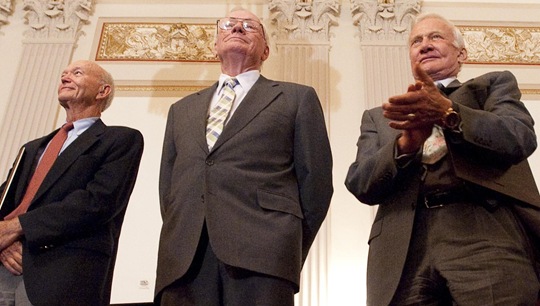 Photo courtesy of the US Government

The 40th anniversary of the Apollo 11 moon landing came and went with token remembrance to mark the occasion. Sure, I saw the references to the event in the news that invariably included the oft-quoted phrase “one small step for man,” but considering the achievement of that time and the stark fact that NASA’s missions since then have been provincial by comparison, the anniversary scarcely penetrated the global consciousness.

The Apollo missions evoke a pride in a collective achievement that drew upon the best resources and minds from many nations to plant a human footprint on an alien surface. We reached the moon on July 20, 1969, and five successive Apollo missions would do the same, the last in 1972.

It’s hard to find inspiration in manned space flights today. Not in my lifetime has a manned spacecraft left Earth’s orbit. That’s strange. My generation and others that have followed are taunted by grainy black and white images of Neil and Buzz playing on the lunar surface four decades ago. What do we have to show by way of building on their legacy? The Mars Rover? The International Space Station? I think not.

Space missions that serve only to place solar panels and associated nuts and bolts on the International Space Station or study the effects on the human body of long-term exposure to a zero-gravity environment fail to suffice. Construction of the station began in 1998 and continues today, 11 years later, yet our appetite for missions to explore the surface of another celestial body was quenched in but four years. It’s illogical.

Some commentary surrounding the 40th Anniversary of the Apollo 11 mission drew attention to humanity’s next exploration imperative: a manned flight to Mars. Such a mission would be a grande achievement and a proper nod to the brazen Apollo missions of so long ago; however, I’m not sure why there’s a lack of interest in the moon. Have we learned all there is to learn, explored all there is to explore? I suspect we know very little about the moon considering how much we’re still learning about the planet we’ve inhabited since our species’ beginnings.

In the four decades since Apollo 11, the notion of landing a human being on the moon is as daring today as I imagine it was when an American president described such a national goal in 1961. The simple fact is we haven’t built on the legacy of Apollo despite decades of advancements in technology and science, and I fail to see any credible preparation underway by any space agency to match Apollo, let alone surpass it. We live in the shadows of taller men.