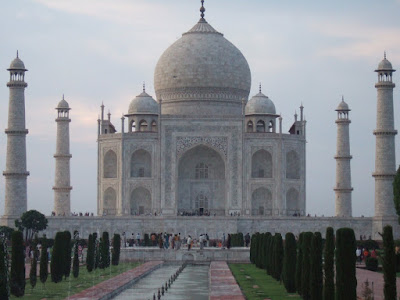 After one day in Gwalior, our next stop was Fatehpur Sikri…

Fatehpur Sikri
This one of India’s most historical cities constructed by the great Mughal Emperor Akbar. He had 3 wives, one from each major religion in India: Islam, Hinduism and Christianity. In fact, he tried to create his own religion called Din-i-illahi that intended to combine the best elements of the religions of his empire (primarily Islam, Hinduism and Sikhism ; elements were also taken from Christianity, Jainism and Zoroastrianism). If only we could do that now and live in peace eh? 🙂

When we got to the city our car was hauled down at a check point where a guy who claimed to be a government approved tourist guide offered to show us around. We checked his ID which looked legit (always check ID!). We decided to hire him, hoping to learn a lot more about this city from him than being left to our own devices. His fee was Rs /- 350 that would apparently cover the entry fee of Rs /- 20/ person (which is 140 for 7 of us) and the Rs /- 50 parking fee. Sweet deal! (or so we thought). He did pay for our parking as we entered. No one asked for a per person entry fee. We’ll come back to this in a sec…let’s move on to the historic city itself…

As we entered the city one of the first things I noticed was the fact that there was a LOT of people living within the old walls of Fatehpur Sikri. There was a whole city inside walls of this historic monument. Make shift house and slums were all around us. We took an auto-rickshaw to the fort which is about 2k the parking lot and walked up to the old fort. Akbar constructed this fort for the religious Sufi Saint Salim Chishti. As the legend goes, Akbar did not have any kids and needed an heir. It was due to some special prayers and consultation of Salim Chisti that Akbar’s Hindu wife bore him a son. So Akbar built this city as his capital and this fort with space for Chishti’s family in Fatehpur Sikri. The fort is breathtaking. It is what you imagine when you think of a mughal fort. This specific fort has been the site for endless number of bollywood movies set in the mughal period. However, what really disappointed all of us was the amount of garbage inside of a monument that is a national treasure and a UNESCO World Heritage Site. Everyone there was trying to make a quick buck. The fort was bursting with vendors, beggars and hustlers. We even saw a ton of people sleeping in the corridors which lends me to believe that they might actually *live* there. [Check out the video my brother and I took when we were ticked off about this]

Speaking of people trying to make a quick buck. Our “official guide” told us about Sufi Saint Salim Chishti’s tomb being part of the fort. He mentioned that if you make a wish and tie a piece of string inside the tomb, your wish will come true. As he was telling us about the significance of the tomb and its power to grant wishes, we arrived on the back side of the tomb where there was a number of vendors selling “chaadars” or sheets of cloth as an offering on top of the tomb. The vendors and guides then launched a full fledged effort to sell us a chaadar. They mentioned that all the money goes to charity, the cloth is donated to the local village down below the fort etc etc. They insisted that it was necessary to purchase a chaadar otherwise we would be forsaking the poor and spending money meaninglessly on things that do not actually matter. Their approach and pressure tactics made all of us extremely uncomfortable to the point that my mom and I wanted to leave the premises immediately. However, the emotional blackmail worked and the guilt of not helping the poor was stronger so we gave into their demands. There were cloths of 3 different sizes and prices. We agreed to buy the smallest one. Instead they just said that we had to buy the medium sized one and asked for Rs /- 2100. We were shocked and it knew right away that our “official guide” was going to get a commission for duping us. At this point we just wanted to get it over and done with. So we walked through the tomb, paid our homage, made our wishes and exited as soon as possible. What hurt and disgusted me the most was that on our way out a priest sitting in front of the tomb took a stick and stopped me and my mom in our tracks and asked for us to put money in a basket. At this point our disbelief was at an all time high! I looked around and made eye contact with our guide and gave him the “what in the world is going on?” look. Fortunately, he informed the priest that we had already paid and we were able to leave the tomb.

It saddens me to no end that local and foreign tourists come to this amazing city of such historical significance to appreciate it, capture it on film and walk away with good memories. They come with high hopes and in major anticipation of the history that they are going to be awestruck by. Instead they get duped in the name of religion, culture and charity. Not one cent of the money that we “donated” is going to help the poor. No wonder the guide’s fee was only Rs /- 350 and he covered our parking and the non-existent entry fee. It is also disappointing to see such a monument being reduced to a dumping ground and a souvenir market. Can we not do better? If we can give the tourists a good experience when they visit, they will tell 5 more friends. If this is the experience they are all getting, I can guarantee that they will never venture to Fatehpur Sikri ever again (I know I won’t) and neither will any of their friends that have heard this horror story.

This seem a bit biased and negative towards India. I do not mean to shine a negative light on my Motherland. India has made a lot of great changes and had really done some amazing things in terms of infrastructure and public services. However, there are still areas that require attention. Citizens need to have a sense of pride in their own motherland and its historic sights. India has so much to offer in terms of history and natural beauty. Corruption is the evil holding it back from further progress. I hope that with more stable and honest governments at the top, the corruption at the lower levels will also slowly disappear.

Agra
Since I have already gone on at length about Fatehpur Sikri, I will offer a short summary of the Taj Mahal. It is undoubtedly one of the world’s most famous monuments and definitely the world’s most romantic piece of architecture. It was built by Mughal Emperor Shah Jahan in memory of his wife Mumtaz Mahal. Walking through the main doors and seeing the Taj appear in the distance was a magical experience for me. My heart literally skipped a beat and the hairs on the back of my neck stood up. I was speechless. I had to turn the camera off and just stand there, in awe, to drink in the moment. The scale of the structure is unexpected. It is much larger than it seems in photographs. People are mere specs on its steps and front foyer. It is also a whole lot cleaner than I remember as a child. The Indian government has worked to completely restore the outside by removing decades of dirt and pollutants from the white marble. The city of Agra has (just like New Delhi) made an effort reduce air pollution and preserve this exquisite monument that has become a symbol of love and romance around the world.

The Taj was a complete contrast from Fatehpur Sikri. Being one of the world’s wonders, it has excellent security around the perimeter. It is clean and well-maintained. There were hardly any people in my face trying to sell me stuff (with the exception of a few at the front gate selling photos). Visiting Taj Mahal was a pleasurable and relaxing experience from time we parked the car to the time we got back to the parking lot and drove back to New Delhi. India’s culture and its history is what makes it one of the most unique areas of the world. I just hope that we can do justice to all of our historical monuments in maintaining them and not just the ones that are deemed important or of interest to international tourists.

Next stop: The Golden Temple