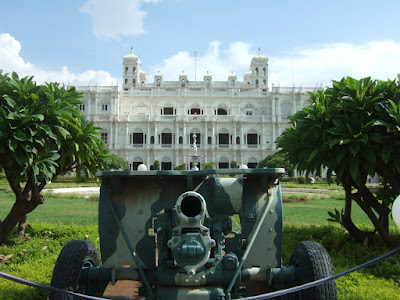 Jim has asked me to be a guest contributor on TheUrbanCountry.com for the travel section. This goes to show that sucking up to people DOES in fact work! Thanks Jimmy! I am honored to share my silly travel stories with the Urban Country audience. After my previous update, some of you commented on my brother’s excellent dress sense. You referred specifically to his ‘iPood t-shirt’ and wondered where that can be purchased . I picked up that t-shirt from Thailand in 2007 (among many others such as ‘Know Your Shrooms’ with the Mario Bros mushrooms almanac). Gaurav (my brother) is flattered by the way, and has gone ahead and purchased a few more t-shirts with controversial and funny slogans.

The past few days have been completely jam-packed with local traveling and historical monuments. Delhi-Agra-Jaipur are the three cities in Northern India that comprise the Golden Triangle. I have not been to Agra or Jaipur since a school trip when I was 7 years old. So the memories are pretty vague. Gaurav and other visiting family from Mumbai have never been to either. Both cities are a reasonable driving distance from Delhi so we decided this year to make an effort see these historical cities. We tackled just Agra for now and made a stop in Gwalior (more on this city in a sec). Hopefully we can make it to Jaipur next week.

Traveling by car in India
We headed out to Gwalior two days ago at 6:30 am (which involved getting up at 4:30 am since there are 10 people in the house and only 2 washrooms). It was supposed to be a 6-6.5 hour drive but it took us a bit longer due to traveling in the wrong direction one point. Traveling by car in India is quite different from anywhere else that I have experienced. No one even thinks of printing a map ahead of time or planning a route. Maps are for schmucks! There are decent highways that connect these cities and are usually preferred over country roads. All people know are the highways they need to take and that’s it. The rest is trial and error. And yes, there is a LOT of asking for directions. Once we stopped seeing signs for Gwalior and realized that maybe at some point we missed the turn off, we must have asked directions from any and every remotely available person on the side of the highway. Why this insistent need to ask for directions 10 times on the same street to find the next turn-off you ask? Well the answer is two-fold. Firstly, the answers are often extremely brief. Such as “Just go straight and then turn right after about 5-7 Km” or “Just keep going straight for a ‘while’ and you will just see the Taj Mahal”. Yeh..um…ok thanks! Secondly, each person you ask will give you an answer contradictory to the last one. You see Indian people really love to help and hate to admit that they (god forbid!) don’t know the answer to any question that is asked of them. Everyone has answer for you and finding out whose directions are the right ones is all part of the fun! After a while you start to size up the person’s possible navigational skills at first glance. You also get more picky with who you ask. “Ask the auto-rickshaw driver”, “Don’t ask the woman, she won’t know a thing (this one came from our sexist driver who regretfully was right about that judgment)”. At one point my brother and cousin asked directions from a guy who was taking a whiz on the side of the road. Classy.

Gwalior
Our main reason for visiting Gwalior was to see my cousin Maneet’s boarding school, Scindia School, from which is graduated a few years ago. It one of India’s most exclusive boarding schools that is known for its historical setting and deep-rooted traditions. Scindia School is an all-boys residential school located inside of a fort that was once home for one of India’s regional ruling families, the Scindia Family. The family is still one of India’s most prominent families. After Independence most of the individual city-states agreed to join the Republic of India and give up their land and subjects. They were allowed to keep certain estates and still enjoy some privileges. We visited the Scindia home, 25% of which has been converted into a museum. The ‘home’ boasts an impressive collection of ancient Indian artifacts dating all the way back to the Indus Valley Civilization, antique Indian and French furniture. Chinese ceramics, crystals, vintage cars and so on. One of the highlights was to see the heaviest chandeliers in Asia. They weigh an impressive 3 tonnes each.

Next we visited the school inside the historic Gwalior fort. The fort is on top of a hill with the city of Gwalior surrounding it below. There are ancient carvings in the mountain rock that surround the school. The Scindia School has 600 students with a 8:1 student to teacher ratio, which is pretty darn good since most Indian schools have 55-60 students in one classroom. We spent time with Maneet’s house master who showed us around this amazing school. The facilities for the kids are basic at best. They get a bed and a cupboard in a dormitory with shared bathrooms. This is not a luxury resort for rich kids but a place where kids build character and make friendships that will last them a lifetime. The alumi ‘old boys’ network for the Scindia school is very strong. These boys will help a fellow alumni in a heartbeat, even if they don’t him personally. The sense of loyalty, connection and school spirit is truly inspiring.

The Gwalior Fort is also the sight of an important Sikh Gurdwara (Temple) called Gurdwara Bandi Chor where our sixth Guru, Guru Hargobind Singh (along with a number of Hindu Rajas) was imprisoned by the Mughal Emperor Jehangir. On the Hindu festival of Diwali, he was released by the Emperor and also got 52 other kings released. This is the reason that Diwali is of importance to Sikhs in India. The Gurdwara was very beautiful and picturesque. It is visible on top of the mountain from anywhere in the city of Gwalior.

I am really glad we got the opportunity to see Gwalior. It is a city with so much history and culture that I can’t quite package it in one email. I am grateful to Maneet who was able to show us around the city since it was his second home while he was at school. We ate some delicious north Indian food at his favorite restaurant in Gwalior called Kwality (with a ‘K’ people!). There is nothing better than seeing a place with someone who has lived there 🙂

Check out the pictures here. They continue on from where we left off in Delhi last time and include pics of our visit to Qutub Minar as well. Also check out the video about driving in India.

Next up: Agra and Fatehpur Sikri.