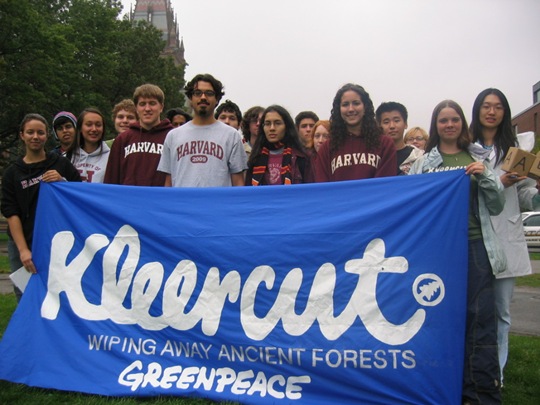 Greenpeace has announced it is suspending its (almost) 5-year-long “Kleercut” campaign against Kimberly-Clark for its destruction of Canada’s Boreal forest to produce its tissue products.

In a joint news conference, the two foes announced that they have finally come to terms with one another with Kimberly-Clark committing to help protect Canada’s Boreal forest.

In exchange for Greenpeace ending its “Kleercut” campaign, Kimberly-Clark has set a goal to obtain 100% of its wood fiber for tissue products from environmentally responsible sources, and by 2012, Kimberly-Clark will ensure 40% of its North American tissue fiber is either recycled or Forest Stewardship Council (FSC) certified – representing a 71% increase from its 2007 levels.

Canada’s Boreal forest covers half of Canada’s entire land mass, and is used by nearly half of all birds in North America. The Boreal forest provides habitat for the threatened woodland caribou, wolverine and over 1 billion migratory birds and the clear-cutting practices used by Kimberly-Clark’s suppliers pose a great risk to these ancient forests and their inhabitants.

Kimberly-Clark has already stopped buying more than 325,000 tonnes of pulp per year from the Kenogami and Ogoki forests in northern Ontario, since the company managing these forests have been unwilling to comply to the Forest Stewardship Council standard.

In addition, by 2012 Kimberly-Clark will eliminate all of its purchases from Canada’s Boreal forest that is not FSC certified.

So what is Greenpeace’s next target to save the Boreal forest? It’s Xeorox! Read all about it here.