Bicycles and Sidewalks Can Get Along 2 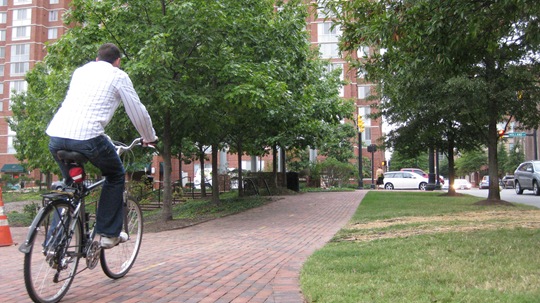 Bicycles and sidewalks can (and do) get along well together. All it takes is a little bit of common sense, etiquette and mutual respect.

Two very unfortunate incidents in Toronto have provoked additional tension between drivers, pedestrians and cyclists. Two months ago I would have thought it absurd that tensions could escalate in a city where many drivers already have contempt for anyone who straddles a bicycle seat.

The first incident happened on August 6th. A woman in Toronto was struck by a 15-year-old cyclist (on a sidewalk) and died from her head injuries. The second incident happened on August 31st. A bicycle courier named Darcy Allan Sheppard had an altercation with the former Ontario Attorney-General Michael Bryant. Witnesses saw Sheppard hanging from the driver’s side door while Bryant drove erratically apparently trying to knock Sheppard off his car. Sheppard was eventually knocked off the car and left for dead before Bryant pulled into a parking lot a block away and called 911.

Surveillance video footage shows what apparently started the altercation: Bryant appears to deliberately run into Sheppard not once, but twice. Sheppard was knocked onto the hood of the car, and then Bryant appears to back up and race off, narrowly missing Sheppard.

Both of these deaths were unnecessary and avoidable.

Spacing Magazine’s Matthew Blackett points out in a Toronto Sun article that in the last 5 years, there has only been 1 bike-on-pedestrian death in Toronto, while 13 cyclists and 131 pedestrians have been killed by automobiles.

Too many drivers in Toronto have animosity towards cyclists. The most common excuse for their antipathy is that cyclists don’t obey any of the rules of the road – as if displeasure at a small number of cyclists is a valid excuse for using an automobile as a weapon to threaten all cyclists.

I’ve been in the Washington D.C. area for the last week, renting a bicycle for commuting and sight-seeing. Upon arrival, I was shocked to learn that cycling on the sidewalks is both accepted by society and perfectly legal. The only exception is that you’re not allowed to ride on sidewalks in high-density areas – so I stay off sidewalks on the core downtown streets.

So far, I haven’t had a single incident where I felt threatened. To put this into perspective, on a typical 30-minute bike ride in Toronto I would be passed uncomfortably close by automobiles at least 2-3 times. Including the past weekend, I’ve racked up more than 20 hours of cycling since I arrived 6 days ago in DC.

On my first day here – to my dismay – I had a pedestrian apologize for unwittingly blocking the sidewalk as I approached behind him. Imagine how it must feel for a cyclist from Toronto to have pedestrians willingly share their sidewalks without animosity. Furthermore, while biking on the road, cars always leave me plenty of space and always grant me the right-of-way.

At first I thought it was perhaps because there are less cars here and people aren’t in as much of a hurry. That theory doesn’t hold up however, because traffic here is at least as bad as in Toronto. The greater D.C. area has a population of over 5 million people with many commuting from outside the city and trust me, their commute time is no better than their counterparts in Toronto.

Then I thought that perhaps pedestrian courtesy stems from wider and less busy sidewalks. Again, not necessarily the case. Sidewalks are for the most part comparable in width to Toronto and I’ve had several situations where the pedestrians had to move over to the side to let me by. Not once have I received as much as even a grimace from a pedestrian.

How could this be? How can pedestrians and drivers grant so much courtesy to cyclists?

Perhaps one problem in Toronto is the perception that all cyclists are a menace because of a small minority of cyclists who disobey the law. Many drivers refer to bicycle couriers as being the renegades of the Toronto streets.

But at the end of the day, if a dumb cyclist runs a red light in a high-traffic intersection, guess who’s going to get injured and perhaps die? It’s not going to be the person sitting in the 5000-pound SUV. Furthermore, if a cyclist rolls through a vacant four-way stop, who cares? I don’t understand why drivers in Toronto care if a cyclist breaks a rule if it doesn’t impact them.

A couple weeks ago in Toronto I saw an angry red-faced driver of a BMW yell at a cyclist for crossing the road in the pedestrian area. How ironic is it for a driver to yell “Hey, don’t you think that’s dangerous?” before dropping his foot on the gas pedal and squeeling his tires, barely missing the cyclist. The cyclist was pedaling no faster than a pedestrian while he crossed the intersection. Who’s the one being dangerous here again?

In Virginia, they post signs that contain “User Ethics” along the pedestrian/bicycle trails along the Potomac river. These ethics define the common courtesy that cyclists and pedestrians should have for each other. In my experience, people generally conform to these ethics and everyone seems to get along as would be expected in a civil society. 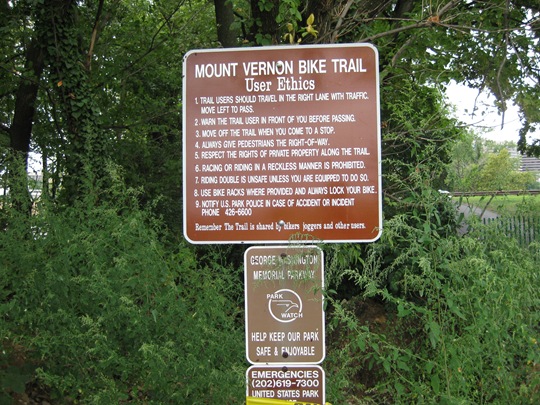 Toronto also has shared trails where pedestrians and cyclists generally get along. Why is it then that cyclists who aren’t in a hurry can’t share a low-density sidewalk with pedestrians as long as they are courteous while passing pedestrians? In Virginia, I always slow down to a crawl before passing a pedestrian.

Of course the right answer is that the city should invest in proper bicycle infrastructure so that bicycles can stay off the sidewalks and not feel threatened by angry drivers. It’s already happening in Montreal and New York City and there are model cities in Europe – like Copenhagen – where this has been proven to work.

But in lieu of proper bicycling infrastructure, let’s use Virginia/D.C. as a model for how the different breeds of commuters can get along. The lesson I’ve learned in the last 6 days is that cyclists, drivers and pedestrians need to show each other more courtesy and respect. If this doesn’t happen, more unnecessary injuries and deaths will occur on our streets.

2 thoughts on “Bicycles and Sidewalks Can Get Along”