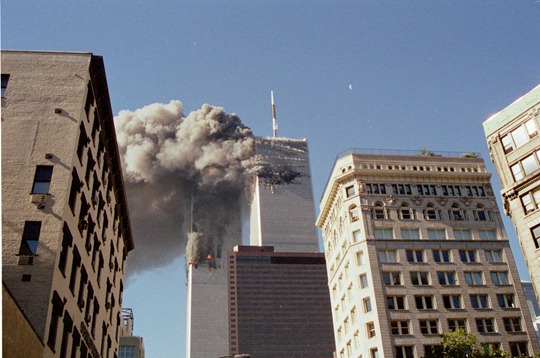 Charlie Sheen has been on the offensive lately, demanding answers to questions surrounding the events of September 11th, 2001. Careful to distance himself from being just another “deluded Hollywood liberal”, Sheen simply wants answers from the government and is demanding a “truly independent congressional investigation into 9/11 and its aftermath”.

Sheen is using his celebrity to attempt to garner the attention of President Obama. However Sheen lost any credibility he had when his “partner-in-crime”, Inforwars.com’s Alex Jones posted a fake 20-minute interview between Charlie Sheen and President Obama.

Not that there is anything wrong with posting a fake “mock” interview, but it should certainly be identified as such. The problem with Jones’ fake interview is that when the interview was first published there was no mention that it was a fake. This was obviously a cheap, deceptive publicity ploy that backfired.

Under pressure from more credible news agencies, Sheen/Jones inserted a line at the end of the fake interview stating “Author’s Note:  What you have just read didn’t actually happen… yet.”

I must admit that I was fooled when I first read it. I found it odd however that there were few media agencies reporting on Sheen’s “interview with the President” while searching on the topic. This would certainly generate a lot of buzz in the media if Sheen did in fact sit down with President Obama.

To further confuse and deceive readers, the fake interview includes the following paragraph at the beginning:

I recently had the pleasure of sitting down with our 44th President of the United States of America, Barack Hussein Obama, while he was out promoting his health care reform initiative. I requested 30 minutes given the scope and detail of my inquiry; they said I could have 20. Twenty minutes, 1200 seconds, not a lot of time to question the President about one of the most important events in our nation’s history. The following is a transcript of our remarkable discussion.

Although the fake interview is extremely deceptive, they did a good job in their characterization of the President and his answers were very realistic and believable.

As someone who has read the 9/11 Commission report, I have a very high level of interest in the investigation of 9/11.

In the fake interview, Sheen lays out 20 bullet points for the President to consider. Here are a few (paraphrased):

Although I think Sheen has some good questions, I don’t agree with the conclusion that he’s alluding to – and it’s not because I believe the US Government is transparent and not deceptive.

First of all, I think we can completely dismiss the first allegation – that the US Government orchestrated the 9/11 attack. In order for the US Government to orchestrate the attack and its cover-up, thousands of personnel would need to be involved. Coordinating a planned demolition of two of the tallest skyscrapers in the world and keeping it secret from the buildings tenants is no small feat – and that’s only one small aspect of the allegation.

We’re talking about a government that can’t even keep a foreign coup d’état secret. To give credit to the government for coordinating the events of 9/11 and keeping it secret puts an tremendous level of faith in the ability, efficiency and effectiveness of the US Government’s operations.

Addressing the second allegation – that the US Government had prior knowledge of the impending attack and did nothing to prevent it is also a damning allegation. Like the first allegation, it suggests that certain officials within the US Government would be willing to sacrifice thousands of innocent civilians in order to win over its populace to support an offensive on two countries in the Middle East that provide a strategic advantage in the balance of world power.

This allegation is perhaps more realistic than the first. Turning a blind eye to known events requires far less personnel than actually orchestrating the attack – making it far easier to keep a secret from the general public.

I’m certain that there exists classified information about 9/11 that would be embarrassing for the government to release. What if the people of the United States found out that the US Military was in fact training at least 5 of the hijackers to fly airplanes? That doesn’t mean the government knew they would later become hijackers or that a plan to fly airplanes into the World Trade Center existed.

But it is substantial enough that releasing this information to the general public would be a political disaster, even if released by President Obama.

For this reason, there is classified information that will never be released to the public about the 9/11 attacks – even if the President has the best of intentions to be transparent and open to his people. It’s like a husband who starts lying to his wife, and has to continue digging deeper into his web of lies. After a while a small disclosure about an innocent lie could compromise the husbands bigger lie and that would be the end.

The US Government is no different – it has to engage in some level of deception in order to retain its status as the world’s superpower.

Regardless of government’s involvement in the events of 9/11, the tragedy was certainly exploited as a means to achieve the vision laid out by the Project for the New American Century – a now inactive group that many of Bush’s senior administration members belonged to. PFNAC made no attempt to hide the fact that they wanted a war in Iraq to protect “a significant portion of the world’s supply of oil”. They asked for a war and they got one.

Maybe we don’t want to know the truth.