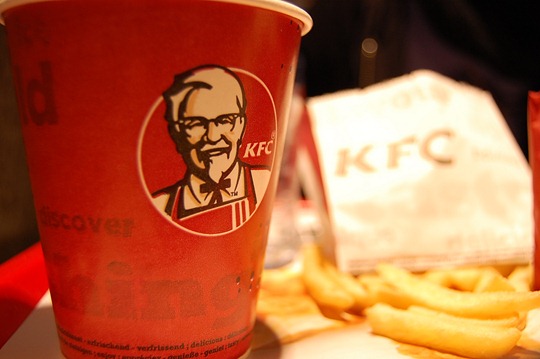 The latest commercial starts out with a black man with a white background holding a bucket of chicken where he nods to the camera and gleefully declares, “I’m in”. More people quickly join this man while holding their own buckets of chicken, stating: “We’re in too”, and “I’m a part of it” – as if eating at KFC is akin to belonging to some sort of secret society.

A few seconds later there are dozens, then thousands, then millions of people lined up to declare their own affiliation with the secret KFC society. 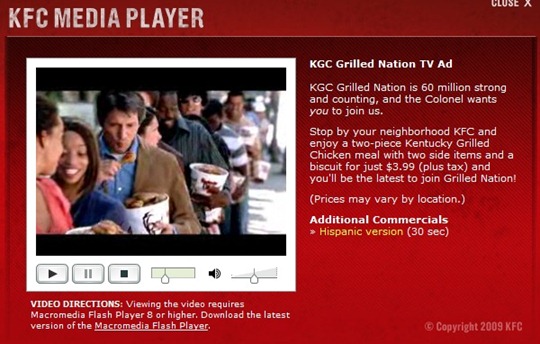 The purpose of this commercial is to highlight the fact that more than 60 million people have eaten the all new Kentucky “grilled” chicken that KFC launched back in April 2009 when health-conscious Americans finally generated enough demand for KFC to offer a health(ier) alternative to deep fried chicken.

They are calling the latest marketing campaign “grilled nation”, and there is even evidence of a gradual shift from KFC to being known as KGC. It doesn’t quite have the same ring, but perhaps after years of repetition we will become more accustomed to it.

It’s possible I see things differently than most people, but when I see millions of people standing in an endless line – each carrying their own bucket of chicken – all I can think about is the amount of unnecessary waste generated by KFC and other fast food chains.

I can’t blame KFC for basking in such a radical extension to a core menu that hasn’t changed a whole lot over their 50+ years of operations. A KFC grilled chicken breast only has 4 grams of fat compared to 21 grams of fat in the Colonel’s original deep fried recipe – so there are substantial health benefits to the new recipe.

But what we really need is a radical change to how we handle fast food waste, and the first fast food chain who is progressive on reducing its waste will win the hearts and minds of eco-conscious individuals – a core value that is spreading to more people each day.

There are several ways that a fast food chain can actively reduce its waste footprint. One option would be to offer dine-in plates, cups and cutlery with on-premises dish washing. If only half of KFC’s 12 million daily customers were served on re-usable plates, it would cut their customer waste generation immediately in half.

Lastly, I suggested earlier this year that fast-food chains could use fallen leaves as sustainable food packaging as an alternative to paper or plastic.

When that day arrives, I just may decide to try KFC again.