Toronto Cyclists Are Selfish And Rude? 55 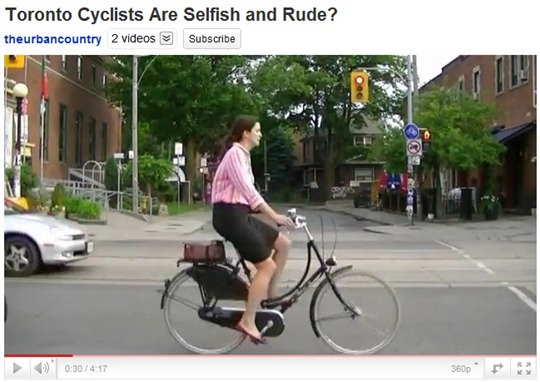 Being considerate – whether on a bicycle, in a motor car, or on your feet – is important to improving conditions on our shared streets. Treat others as you would like to be treated. If we all lived by that golden rule, our streets would be a much more pleasant place to be.

Instead of promoting this golden rule, a subset of the cycling community and the mainstream media in Toronto has resorted to name calling and hyperbolic generalizations about Toronto cyclists in an effort to shame cyclists into blindly obeying laws that were designed primarily for motor vehicles.

The most recent fury started late last week when Toronto cyclist Emma Woolley wrote an expletive-laden open letter to other cyclists slamming them for not obeying traffic laws.

“By the time I get to work I am so incensed by the carelessness of others that my days are always off to a bad start. Why do cyclists feel that they’re above the law in almost every single situation? Why the sense of entitlement and “because I can?” There’s a widespread attitude that we don’t have to follow the rules simply because we’re not in a car. It’s unsafe and quite frankly, stupid.”

Woolley’s letter was followed by an angry Toronto Star article on Monday which painted the majority of cyclists as lawless, inconsiderate, dangerous renegades which terrorize our streets.

Cyclists in North America already get the short end of the stick and there is already enough animosity on our streets. Instead of writing articles that breed hatred towards cyclists while ignoring the fact that motor vehicles kill several dozens of people every year in Toronto alone, we should be using that energy to change our laws to make cycling more safe and comfortable so that cyclists aren’t tempted to bend the law to stay clear of danger.

A brilliant video that went viral this week by New  York cyclist Casey Neistat shows how nonsensical it is for the NYPD to ticket cyclists for not staying in the bike lane, when the bike lane is so often obstructed by motor vehicles and other obstacles.

This video brought great exposure to an issue that is prevalent here in Toronto too: we are spending so much energy chastising cyclists while we completely ignore the real danger on our streets: automobiles.

Instead of writing a long-winded article in protest against the hatred we are breeding, I decided to create a film on my 30-minute commute to highlight that the vast majority of cyclists here are considerate and courteous (even if we break the odd law to stay safe).

And here’s the follow up video I posted showing the full ride in high speed in case you thought I was “editing out” the bandits:

Sure, there’s the odd jerk-off cyclists who have no consideration for anybody but themselves. But these bandits are few and far between, and painting all cyclists with the same brush does no good for anybody.

Be considerate to others, stay safe, and enjoy your ride.

55 thoughts on “Toronto Cyclists Are Selfish And Rude?”