Our Backwards Approach to Road Safety 29 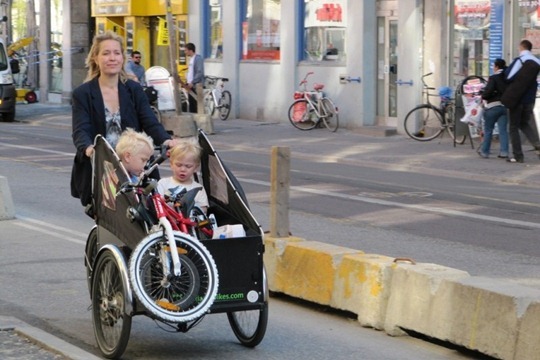 A family in Copenhagen by MarkA / RateMyVelo.com

English-speaking countries generally take a backwards approach to improving road safety for pedestrians and cyclists. Instead of addressing the root causes of danger, politicians implement band-aid solutions that ignore the root cause in the name of maintaining unimpeded traffic flow for motor vehicles. In most cases, motor vehicle flow is more important than cyclists’ safety and this has been proven time-and-time again.

The current mayor of Toronto has made this very clear in his plans to remove bike lanes on Jarvis street because it added 2 minutes to motorists’ commute. It’s okay for cyclists to ride 5 minutes out of their way to a nearby bike lane littered with potholes, but god forbid we make motorists wait 2 whole minutes to get to their destination.

In Australia, (and some Canadian provinces), the solution for cyclist safety involves mandatory helmets for all. Mandatory helmets do nothing to help prevent collisions in the first place. In Toronto, a motorist can legally hold a coffee in one hand, a cigarette in the other, and steer with his knees while listening to loud music. But a cyclist by law must always have 2 hands on the handlebars (in case the cyclist encounters one of these distracted drivers).

While walking to the park last night with my dog (a 400 meter walk), we were almost struck by 2 separate distracted drivers. One was rolling quickly through a stop sign turning right and slammed on his brakes when he saw us in front of him, and the other was turning on to the street and looking the opposite direction when he almost struck us.

The Toronto Police have recently been on a blitz targeting cyclists rolling through 4-way stops. Just last week I witnessed 2 cyclists get pulled over, meanwhile the police ignored 2 motor vehicles who also rolled through the stop sign. The blitz was clearly targeted at cyclists.

This blitz comes on the heels of a video posted by the Toronto Star that shows more than 50% of cyclists passing through a red light.

Problem is, the newspaper intentionally hid the fact that said intersection was basically a “T” intersection that crossed a driveway for a condo building. They positioned the camera in such a way that the driveway wasn’t visible, so it looked like a regular intersection crossing a road. They also failed to disclose this fact in the article that accompanied the video.

In fact, if you watch the video, you’ll see that pedestrians didn’t wait for a green light either because there weren’t any cars coming out of the condo garage. Sure, you can argue that a red light is a red light, but you can’t tell me that these pedestrians or cyclists were being reckless and having blatent disregard for others.

The Star video was released shortly after a video I created to protest the Star’s earlier depiction of cyclists as selfish and rude. My video now has more than 8,000 views, and shows that most cyclists are considerate and use common sense while riding in Toronto, and the real danger is distracted motorists and a reckless delivery man who forced cyclists out of the bike lane.

The newspaper later disclosed the fact that its video was recording a condo driveway in a a follow-up blog post, conceding that this “skews things”. But by then the damage was already done and people were demanding that police target cyclists.

There are plenty of great analogies to explain our backwards approach to road safety. My favourite is an article written by Kim Harding which compares the Taliban approach to safety for women to the UK’s approach to keeping pedestrians and cyclists safe.

This morning while walking to my doctor’s office, I noticed some men cleaning office windows above. I pondered to myself what might happen if these workers started falling from the buildings and dying in numbers. I assume they would investigate the cause (perhaps the ropes they are using are old and need to be replaced), and they would solve the root cause of the issue. They may even halt all window cleaners from performing their duties until a full investigation has been done and the problem rectified.

The point is that they would address the root cause of the issue. They wouldn’t simply mandate that all window cleaners wear helmets, because a helmet *may* save their life. They don’t put a pile of pillows at the bottom of the building in case the rope breaks. They fix the rope.

Similarly, when a plane crashes, they don’t decide to hand out parachutes to all passengers on similar planes just in case people need to jump if something goes wrong mid-flight. They get to the source of the problem and *prevent* it from happening (by implementing a change to the mechanics or inspection processes for airplanes).

Yet the solution to road safety here is not to slow down motorists, or build better bike infrastructure, or better educate drivers, or implement safe passing laws, or change our laws to hold the more dangerous road users accountable, or enforce no parking in bike lanes.

No, our solution is to slap helmets on vulnerable road users, tell pedestrians to wear brighter clothes, tell cyclists to always have two hands on the handlebars, enforce cyclists rolling through empty intersections, rip out bike infrastructure, and fail to hold drivers accountable for their actions.

Thankfully “cycling in numbers” can have a positive effect on safety even without good infrastructure. Drivers are much more cautious on roads where we see lots of cyclists.

29 thoughts on “Our Backwards Approach to Road Safety”