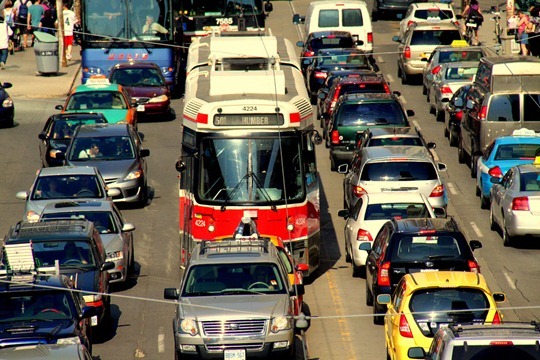 Whether they like it or not, most motorists are socialists. The American media tends to generally associate the term socialism with social assistance such as welfare, but socialism comes in different forms.

That same media is also littered with driver self-pity over the high costs of driving and there is a false perception that driving is exorbitantly expensive. It is a bit ironic because drivers are actually the prime beneficiaries of socialism in North America, and our gas prices are among the cheapest in the world.

According to the Merriam-Webster dictionary, one definition of socialism is:

From subsidies given to oil companies to produce cheap oil, to government bailouts/ownership of auto manufacturers, to road construction and maintenance on streets that cost nothing to use, to highly subsidized parking spaces, to government health care costs associated with pollution from automobiles, to the detrimental health that results from sedentary lifestyle that cars promote, to the vast government policing forces required to enforce our streets: it is undeniable that driving places enormous costs on our society, and this cost is highly subsidized by our government.

Unlike other forms of socialism that benefit society as a whole, the benefits of motorist socialism are outweighed by our roads being overly congested, our air polluted and the growth of alternative modes of transportation are stifled.

Furthermore, the perception that drivers somehow “overpay” for the privilege to use our streets is one of the root causes of animosity that some motorists have that reduces or eliminates their willingness to share a small part of the roads with bicyclists. In reality, people who seldom drive cars are subsidizing those who use the roads most.

In North America, driving is often far less expensive than taking a bus or a train, so there is sadly a financial incentive for people to drive rather than take public transit.

How many countries in this world can boast that driving a car is 26% of the cost of taking a train? And this calculation uses current gas prices at just under $5/US gallon – something many Americans would consider outrageous.

In North America, we tend to have a belief of self-entitlement that everyone should be able to afford to drive a car. The government’s motorist socialism helps make this a reality: In the United States there are 775 cars for every 1000 man, woman and child;  compared to just 128 motor vehicles for every 1,000 people in China.

To illustrate how inexpensive gasoline is in the United States compared to China, we can compare the price of gasoline to the price of a meal at a restaurant.

Okay, okay, you’re going to say Chinese food is cheap. Well, take any other necessity and compare it: In the United States, a litre of gasoline is 43% of a loaf of bread, and in China that same litre of gas is 74% of the cost of bread.

We have kept gasoline and driving in general artificially cheap in an effort to attempt to sustain the “American Dream”. Meanwhile, people are sitting in their cars for hours each day – stuck in traffic – wondering whether they’ve been sold on a false promise.

And despite the artificially low cost of driving, the average American still spends about 2 hours a day working to pay for their cars. The gas tax that was supposed to cover the costs of driving only covers a small portion of the overall costs and the gas tax is dwindling due to increased fuel efficiency and electrification of automobiles.

With the economy and our lifestyles suffering as a result of this false promise, we need to invest in alternative modes of transportation rather than living in an unsustainable hope of free, unlimited automobile use.

Instead of infusing more government subsidization into expanding our roads and providing incentives for more driving, we need to re-design our existing streets to provide safe and comfortable routes for bicycles and better public transportation so people have viable alternatives to cars.

Public transit needs to be more affordable than driving, and it’s high time we use variable road pricing to ease congestion and raise more funding to help cover more of the true costs of driving.