On The Inferiority of Bicyclists and Gay People 54 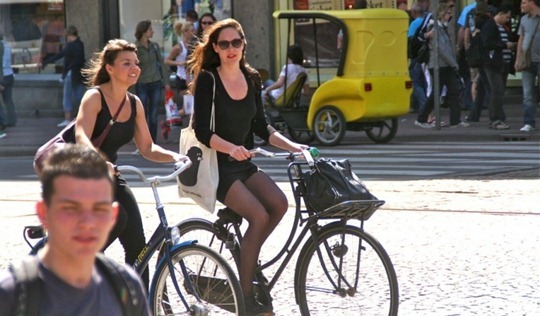 Last night I visited a friend in the “Beach” – a trendy area in the east end of Toronto comprised of a popular stretch of beach frequented by tourists and residents alike. Throughout the night I encountered two separate incidents in which I was ridiculed for riding a bicycle.

But apparently ridiculing someone for riding a bicycle wasn’t enough, so these “macho men” resorted to homophobic epithets to profess their superiority over me.

At the start of the evening I met up with a Brazilian friend of mine in a sports bar and had a couple drinks. We chatted mostly about politics and how his father (a prominent economist, professor and author) had lived in exile in Europe after the US overthrew the Brazilian government to install a right-wing military dictatorship in 1964 under Marshal Humberto de Alencar Castelo Branco.

Upon leaving the bar, I unlocked my bicycle and walked it past a group of sports fans who were smoking out front of the bar.

One guy commented “nice bike” in a clearly sarcastic, patronizing manner. I smiled and replied “thank you” and continued pushing my bike while the group of guys chuckled at their friend’s condescending comment.

As we were walking away, the same guy made an epithet that insinuated that my friend and I were going to engage in gay sex – which led to the group of guys to burst out in laughter.

I kept walking, but found the whole encounter to be sad on so many levels.

My friend then grabbed his bicycle and we rode along a bike path to grab some food and a couple more drinks. He commented on how good we have it in Canada compared to Brazil. In Canada, we have the freedom to hop on our bicycles and head to a restaurant or a bar whenever we want with very little to worry about.

In São Paulo – where he hails from – if you hopped on your bicycle and headed to a bar, there is a good chance you would either be hit by a car or mugged. We take it for granted here how safe it generally is to ride a bicycle and walk/ride our streets after dark.

In Canada we are somewhere in between the two extremes, but we are certainly closer to Europe than we are to Brazil in terms of cyclist safety. In Canada, you are more likely to perish in an automobile than on a bicycle (based on the number of hours traveled).

My friend often rides with another Brazilian friend of his and they are amused and perplexed why more people don’t experience the joy of getting around the city by bicycle here in Canada. It’s a joy and freedom that they can’t experience back home.

A couple hours after the first incident, I was riding along Queen street on my 10km ride home from the Beach when a taxi passed me and a man yelled out of the window (with half his body hanging out of the window): “RIDING A BICYCLE WAS SOMETHING I DID WHEN I WAS FIVE!”.

As expected I caught up to the taxi at the next traffic light. As I passed the taxi I told the man that riding in a taxi is such a cool thing to do and I only wish I could be as cool as him.

A few moments later the taxi passed me again and he again yelled out the windows. This time he called me a “f#cking fag” (among other homophobic phrases that I would rather not repeat here).

I have been using a bicycle as transportation in Toronto since I moved here in 2002, and I had never encountered the type of ridicule and homophobic comments that I received last night.

Perhaps the increasing number of people using bicycles in this city and the media attention that has ensued is perceived as a threat to drunk people who haven’t ridden a bicycle since they were 5-years-old.

Or maybe the alcohol consumption prompted these men to express verbally what most people think under their breath. I wasn’t the only one being strangely ridiculed last night, either: 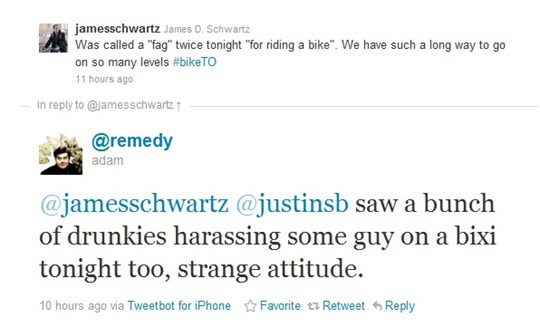 Thankfully this strange type of drunken behaviour is the exception and not the norm, but it does highlight how far we still have to go in the discrimination against gay people as well as establishing the bicycle as a respected, normal, everyday mode of transportation in North America.

Stay tuned for a new “share the road” campaign I am working on to help achieve this goal.

54 thoughts on “On The Inferiority of Bicyclists and Gay People”