Giving Up On Public Transit: Interview With Megan Siegel 71 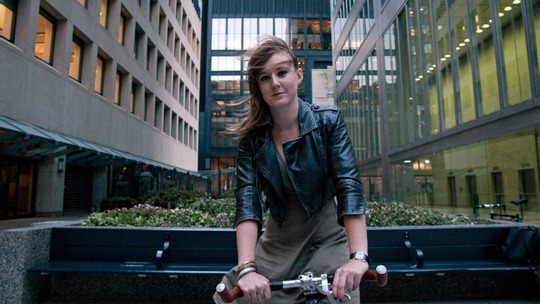 Two years ago Megan Siegel moved to Toronto from the Maritimes. After commuting on Toronto’s scenic (but dreadful) Queen streetcar for 7 months, Megan was ready to call it quits on Toronto and head back to the east coast.

“I lived on Queen Street East and worked at Queen and University, it was about a 5km trip that took me about 45 minutes in rush hour on a good day. I couldn’t believe that it would ever take that long. The streetcar was hot, stuffy, expensive and unreliable and I couldn’t take it anymore.”

Fed up with Toronto’s public transit, Megan went to a local bike shop one day after work and bought a new bicycle in April. Megan hadn’t ridden a bicycle in over 10 years and after purchasing her new bike she suddenly realized she had to somehow get the bike home:

“I sucked it up and rode home and haven’t looked back since.”

Megan’s story is a common one. Three weeks ago we wrote about Robert Lawson who after 17 years decided to start riding a bicycle again after becoming disillusioned with Toronto’s transit system.

Public transit in Toronto has long been neglected and Toronto’s current mayor wants to reduce service even further while raising fares for public transit users. Meanwhile the same mayor rescinded the only fee the city charges to motorists, eliminating a reliable stream of $60 million in revenue for the city, while paying $300,000 to remove existing bicycle infrastructure for the first time in history to make more room for cars. 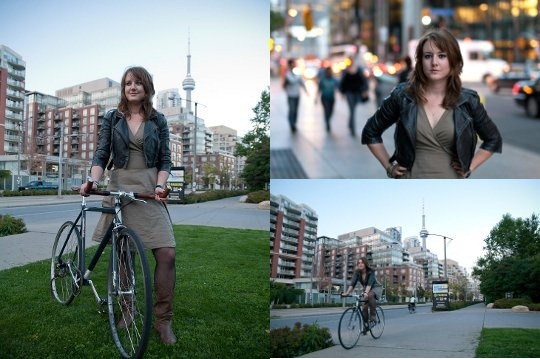 On a positive note, the mayor’s focus on removing barriers for motor vehicles will only increase automobile congestion (and public transit will thus also suffer), so Megan’s decision to use a bicycle to get around the city was a timely and smart decision.

Asked about how living in Toronto compares to her growing up in a small town on the east coast, Megan told me:

“The house I grew up in was about 20km outside of the town of Shelburne, Nova Scotia. The only people who ride bikes in Shelburne and surrounding areas are people who are under the age of 16. As soon as you turn 16, you get your license and no longer have the need for a bike.”

Before Megan started using a bike to get around, she hadn’t realized how effective a tool the bicycle can be:

“I had no idea how much ground I could actually cover on a bike. Looking back, I could have absolutely used a bike in my hometown. I wouldn’t necessarily have ridden it the 20km back and forth from home to school, but I now know that I could have easily used it for times when I was in a pinch. Quite often my parents would have the car and I would be stranded. Here in Toronto, I’ll ride 20km and think nothing of it. I know it’s a faster, cheaper, healthier option. I am much happier since I got a bike.” 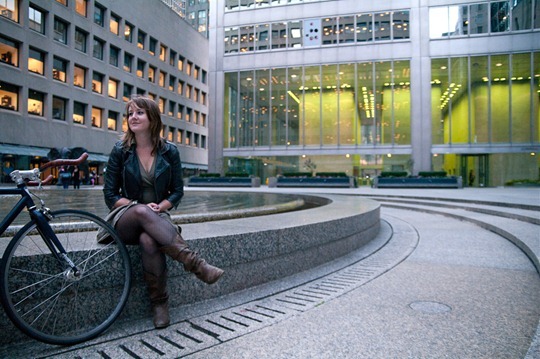 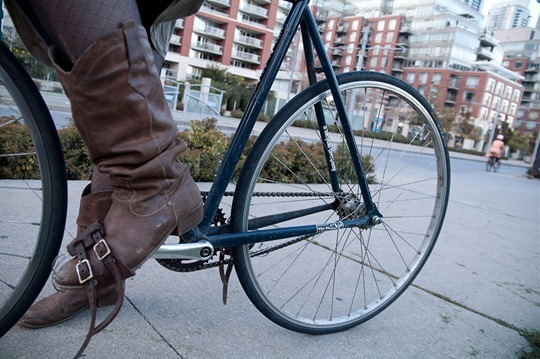 I asked Megan for some advice that she could give to other people who haven’t ridden a bicycle in a long time and who are thinking about starting again:

“Just take it easy at the start. Be careful when it’s raining. Walk your bike across the crosswalk instead of turning left on streetcar tracks when it’s really busy. Be confident. I was apprehensive and scared when I started, but I jumped right in and now I couldn’t imagine living any other way.”

Megan told me about a few things she’d like to see implemented in Toronto:

“One thing I always joke about is how I wish there were digital clocks attached to every streetlight so I can time my rides easier.

More seriously, I quite often end up at red lights where I either wait for several minutes for the light to turn green or I have to get off my bike and hit the crosswalk button. I’ve noticed a few places where there are weight sensors for cyclists. Bloor and Manning has one and Argyle and Ossington just had one installed. It would be handy if this was the norm at all smaller intersections.

The bike boxes that are new to the city are great; I just wish drivers knew how to use them. “ 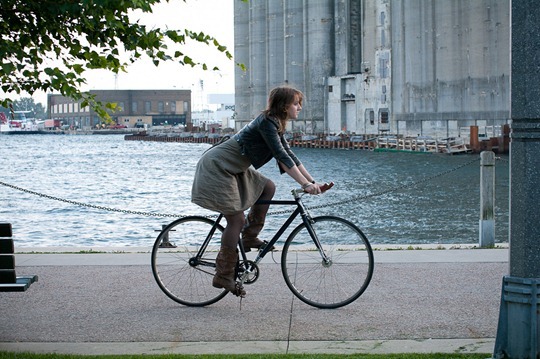 And on motorist education and motorist-bicyclist relations:

“I wish there were more resources for drivers and cyclists alike. Just the other day at an intersection with a bike lane, a lady driving an SUV asked me who gets the right of way, the cyclists in the bike lane or her right-turning vehicle. Another driver legitimately thought that cyclists were NOT supposed to ride on the street. She was yelling at me to get on the sidewalk. There are a lot of grey areas that I think both cyclists and drivers need to be educated on.

When it comes down to it, everyone just needs to watch where they’re going. “

Megan’s positive experience with using a bicycle to get around has also had an effect on her friends:

“I have at least 5 friends from the east coast who bought bikes in Toronto this summer. I like to think I played a part in this. I was the first one in my group of friends to break down, stop using transit, and get a bike. They all saw how much I loved it, how easy it was for me to get around downtown and they love it as well!”

If each of those 19,162 bicyclists convinced 5 of their friends to use a bicycle, we could increase the number of bicyclists entering the downtown core each day to 95,810.

Thanks Megan for sharing your story!

71 thoughts on “Giving Up On Public Transit: Interview With Megan Siegel”