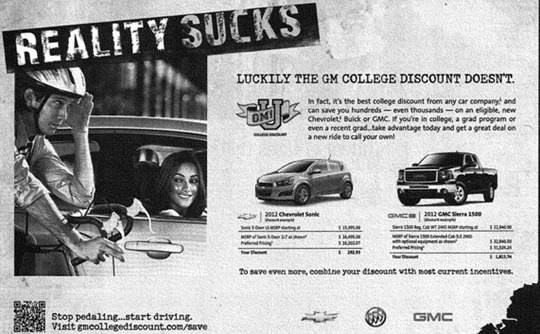 GM faced intense heat from the bicycling advocacy world after the League of American Bicyclists brought attention to a GM ad aiming to sell cars to students. The ad is called “Reality Sucks” and reads “Stop pedaling… start driving” while showing a dorky guy on a bicycle trying to hide his face because he’s embarrassed about being on a bike.

“Reality Sucks, says GM… so does being unfit, in debt, stuck in traffic and paying through the wahoo for gasoline”

Copenhagenize accuses the automobile industry of striking back against the bicycle advocacy world by “subtle use of imagery to underline their point that cycling is geeky, only for poor souls and can’t compete with the sexed up car ownership world”.

Does the car industry feel threatened by the rise in bicycling in cities across the globe?

GM singlehandedly brought an end to electric streetcars by the 1970’s, they crushed virtually their entire EV1 fleet without a good explanation, and now they are fighting back against cycling.

Should bicycling advocates trust GM given their history?

ZipCar recently faced criticism over an ad about cycling – though it didn’t belittle cyclists nearly as much as the GM ad.

Car companies should embrace bicycling culture. People who use bicycles often own cars – or at the very least they use cars occasionally. With bicycling on the rise in cities around the world it’s in the auto industry’s interest to think of new innovative ways to capture the hearts of bicyclists rather than marginalize them.

For example, GM could partner with a bicycle company and throw in a free bicycle for every car purchase. This would be a much better approach to market their cars to students.

Perhaps the tagline could read: “Get a free bicycle with a purchase of a GM vehicle. The bike gets you to class on time and the GM car gets home on time for Mom’s weekend dinner”.

GM has done the right thing by pulling the ads out of rotation, but the truly right thing to do would have been not to run the ads in the first place.