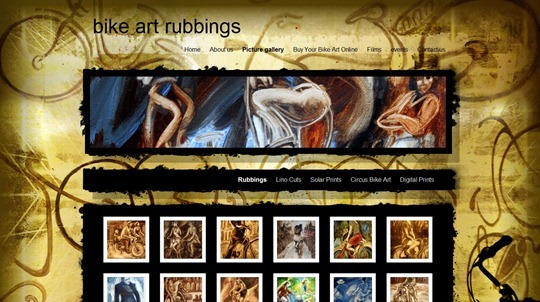 In September we announced a bicycle art contest where one lucky winner who submitted a bicycle photo would win a painting of that photo by Mike Rubbo. The painting would be shipped to the winner, and would also be added to Mr. Rubbo’s bicycle art collection at www.situp-bike-art.com.

Mike has reviewed the submissions and has now chosen the winner. Without further ado, the winner is reader Joe Arruda from Oshawa, ON, Canada. Joe submitted a photo of himself with his dog Duffy riding happily in the front basket of his Norco bicycle.

Mr. Rubbo concedes that he normally avoids lycra and helmeted cyclists in his paintings, but he loves the energy and sincerity exuded by Joe’s photo:

“They are having fun the two of them”, said Mr. Rubbo of Joe’s photo.

In the original contest article, Mike had explained why he avoids lycra:

Following is the winning photo. You can see the look of contentment in both Joe and Duffy’s faces as the August breeze sweeps across their faces. The photo was snapped during a Tuesday night ride in late August just outside of Oshawa, Ontario, Canada. 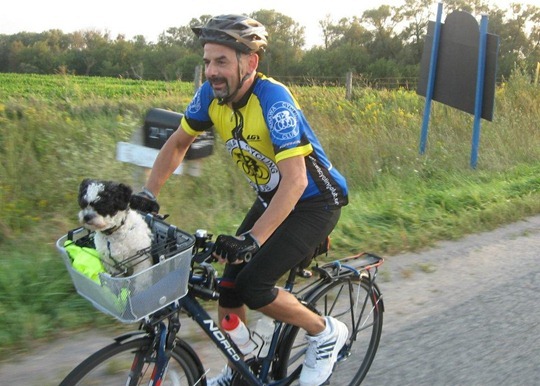 Mr. Rubbo studied film at Stanford University on a Fulbright scholarship, has taught film at Harvard University and worked for 20 years as a documentary filmmaker at the National Film Board of Canada, directing more than 40 documentary films and winning several international prizes.

In recent years, Mr. Rubbo has been focused on promoting bicycling on his website situp-cycle.com and through his bike art collection at situp-bike-art.com.

Through his bike art and films, Mike strives to “persuade non-riders that bikes are both beautiful and practical – not to mention fun, healthy and sensuous”.

The Urban Country would like to sincerely thank Mike for volunteering his time to paint Joe’s winning photo for this Urban Country exclusive contest.

We think Joe and Duffy will enjoy their painting. Stay tuned for an upcoming article which will feature a photo of the finished artwork.

Until then, ride on…