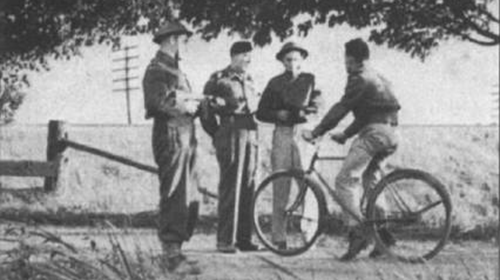 Agents practising being interrogated. The rural situation of camp X can be glimpsed from the background. (From the Pelham-Burn collection, reproduced by courtesy of Lynn-Philip Hodgson)

On 6 December 1941, just one day before the Japanese attacked Pearl Harbor, a British spy training camp opened in Whitby, Ontario, some 50 kilometres east of Toronto. The training camp STS 103 – also known as Camp X – was so top secret that the Prime Minister of Canada wasn’t even aware of its existence until 1945.

Camp-X provided “invaluable help” to Colonel William J. Donovan in the creation of the Office of Strategic Services (OSS) in 1942 – the predecessor to the Central Intelligence Agency.

The purpose of the camp was twofold: 1) To train men recruited in Canada to become spies in German-occupied countries (e.g. French Canadians), and 2) To allow the British to provide assistance to the Americans to build their foreign intelligence service (something which wasn’t allowed to be done on American soil while the United States remained neutral).

My interest in the topic was first piqued in 2001 when I read the book Almost, a story of a 20-year-old Canadian with Hungarian heritage who trained at Camp X before being dropped into Hungary in 1944 only to be captured and tortured by the Germans shortly after his arrival. James Bond author Ian Fleming had also trained at Camp X, providing inspiration for his novels.

The Special Operations Executive Secret Operations Manual used for training the spies was published long after the war ended. The training manual covers a variety of topics ranging from silent killing to sabotage to the art of disguise. I picked a copy of the manual in 2007 for academic study and personal interest.

Among other things, the training manual highlights the usefulness of bicycles as a tool for covert operatives to remain inconspicuous when performing their duty in occupied countries.

Bicycles allowed operatives to stay relatively under the radar in German-occupied countries where train stations were closely monitored and motor vehicles were frequently stopped or had to pass through check points.

Although bicycles were indeed used by the military during the war, the SOE training manual highlights the civilian use of bicycles as a mode of transportation to elude officials and avoid suspicion. 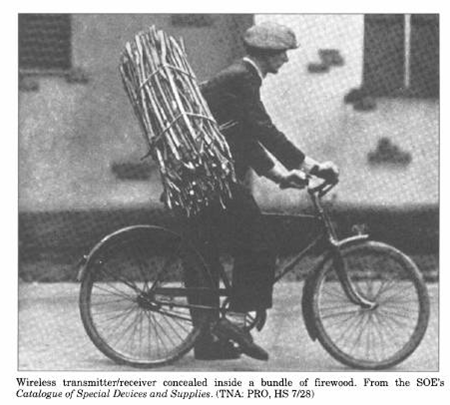 Here are a few excerpts from the training manual pertaining to bicycles:

(Editor’s note: The escape procedures section explains techniques that can be employed by the operative to escape from occupied territory)

b) Some of the means of travel and comment upon them

Following is rarely done by single person, more frequently by combination of several with various types of cover, E.g.:

(Editor’s note: This section explains how movements can be traced by officials or by the operative)

e) Tire Tracks. Most important consideration is which way they are going. Most certain way is by crossing or overlapping of front wheel tracks by rear wheels. Over a bump tracks will momentarily broaden out at the far side, as the tire takes the downward bump of the chassis. Position of the tracks on the road are also an indication, especially when cornering. In the case of a bicycle, direction is more easily distinguishable, as rear wheel more often crosses or obscures front wheel, especially uphill as the forward position of the rider causes more wobble. The faster the travel the straighter the line.

Not only were bicycles useful for secret agents, they were also the most practical way for civilians to get around when motor vehicles were parked due to fuel shortages and rationing. My Grandmother – who was 9-years-old when the war broke out – rode her bicycle on the rims due to a shortage of rubber tires in the Netherlands under Nazi-occupation.

The bicycle certainly wasn’t the deciding factor in the war, but it had a pragmatic appeal to transport both secret operatives and civilians in occupied territory.