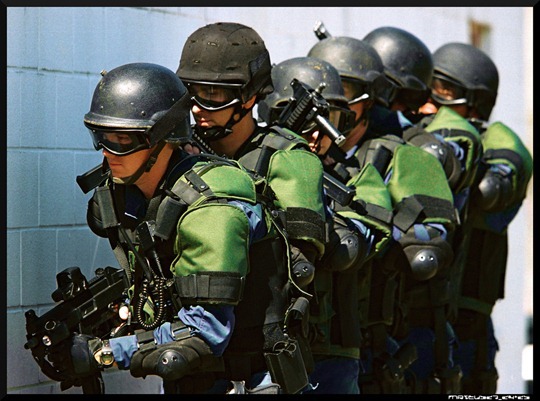 U.S. Customs and Border Protection Officers on the lookout for “terrorists” – Photo by Mateus_27

With the United States mulling over the possibility of building a fence across the Canada-US border and a Secretary of Homeland Security falsely claiming some of the 9/11 terrorists entered through Canada, it’s not surprising to hear about Canadians encountering hostile Customs agents while crossing the once-friendly border.

Nor is it surprising that the number of Customs and Border Protection officers working on the U.S.-Canada border has increased by 700% since September 11th, 2001.

The most recent example of overzealous pomp at the border resulted when a friend of Mikael Colville-Andersen’s crossed the border from British Columbia to Washington state on a train with his bicycle in tow.

The Customs officer berated Mikael’s friend for not bringing a helmet with him. Here is part of the correspondence:

Mikael asks whether Customs officers ever berate car drivers because the speedometer on their cars far exceed any speed limit in the United States? Should these car drivers be denied entry on the basis that they might break the law in their cars?

I have travelled extensively throughout the United States and I have indeed seen a fair share of egotistical, hostile or simply cold Customs agents, but I have also seen a whole lot of really nice customs officers too, so I can’t generalize one way or the other. However, the hostility towards Mikael’s friend is indicative of the general hostility North Americans often have towards cyclists.

Nowhere is this more apparent than here in Toronto where our penny-pinching mayor thought it was appropriate to spend $400,000 to tear out 3 bike lanes on three separate streets that had all been installed within the last three years.

Meanwhile, a key ally of the mayor recently proposed licensing cyclists (an idea which has already been debunked by the city itself). The same penny-pinching mayor rescinded a $60/year vehicle tax while cutting transit service and hiking transit fees by more than $78/year for an average transit rider.

The most recent “bicycle infrastructure” to be installed in Toronto are nut-cracking bicycle speed bumps along a two-car-lane-wide multi-use path that were installed to “slow down” cyclists because of complaints from pedestrians.

The car and oil industry is scared shitless that car usage has peaked, people are driving less, and families are living comfortably car-free.

As people flock to different modes of transportation to avoid the imprisonment of automobiles, the media will further marginalize people who don’t drive in attempt to shame them into driving, just as we saw in a recent GM ad which placed a dorky guy on a bicycle to try to convince college students to borrow tens of thousands of dollars to buy a new car so they wouldn’t have to look like the dork on the bicycle.

But they forgot to mention that their car will probably be worthless by the time they pay off the loan (not to mention their insurance payments, gas costs, repairs, licensing, parking, traffic congestion, stress, etc.)

The border agent who chastised Mikael’s friend for not having a helmet is simply a product of a society that is created by car culture. Not out of necessity, but out of desperation to sell more cars, sell more gas, insurance and everything else that comes along with car culture.

In the end, the customs officer let Mikael’s friend proceed on his journey into the United States without a foam-laced plastic bicycle helmet. On one condition: that he buy a helmet as soon as his train arrives in Seattle.

If only we were so diligent and thorough with car drivers when they cross the border to force them to drive under the maximum speed limit.

Read the full correspondence on Copenhagenize.com