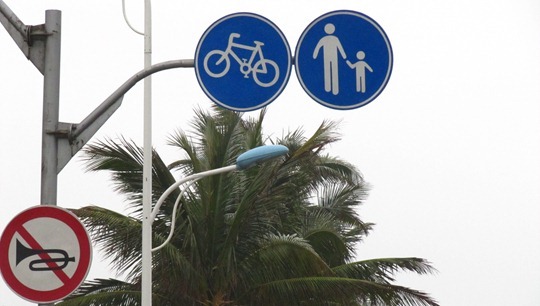 Winston Churchill once said that it has been said that democracy is the worst form of government except all the others that have been tried. Like all other good things, democracy certainly has its flaws.

In North American democracy, transportation policy often caters to the majority instead of considering the best interests of everyone. For example, if 51% of citizens in a North American city commute using motor vehicles, 29% take public transit,  15% walk and 5% ride bicycles, then in our current “democratic” system will usually cater to the majority (drivers) at the expense of the 49% of the population who don’t drive cars.

Today is the fourth day since I arrived in China – on Hainan island in the South China Sea. Although most would say the Chinese government is “undemocratic”, when it comes to transportation, the government often looks at the best interests of everyone rather than catering to a single group. One could possibly even argue that this is more democratic than North American transportation policy which plays favourites with the largest group of voters.

To be sure, China is no saint on many issues. But when it comes to transportation, China’s commitment to looking out for the greater good is evident by the vast expenditures invested in public transit in its cities, its world-class bicycle infrastructure, and regulation on the number of motor vehicles allowed to be registered in major cities. All three of these initiatives have helped to reduce pollution and traffic congestion in Chinese cities as well as providing affordable alternative means of transportation for its citizens.

Democracy has failed us in North America. Our government has catered to drivers without considering the consequences or working toward the greater good of everyone.

Our democratic process rewards polarization to win votes by isolating groups of people – the “divide and conquer” approach. We thus end up with an us vs. them attitude when it comes to allocating the limited space on our streets. You are either “for” cars, or “for” bicycles. There doesn’t seem to be a middle ground, even though most people who use bicycles in North America also drive cars.

The result is that it becomes inconvenient and uncomfortable to ride a bicycle in North American cities. This leads more people to resort to motor vehicles as they are sole mode of transportation.

Further, the bike lanes here aren’t just a painted line on the shoulder of a road or located directly in the door zone of a row of parked cars. Bike lanes here are wide and physically separated, making riding a pleasurable and safe experience instead of a stressful and dangerous one.

Below is a photo of a new road that hasn’t yet been built. The street signs have preceded the road itself. Each of these new roads come equipped with a sign that is so common across China to indicate which lane is dedicated to bicycles: 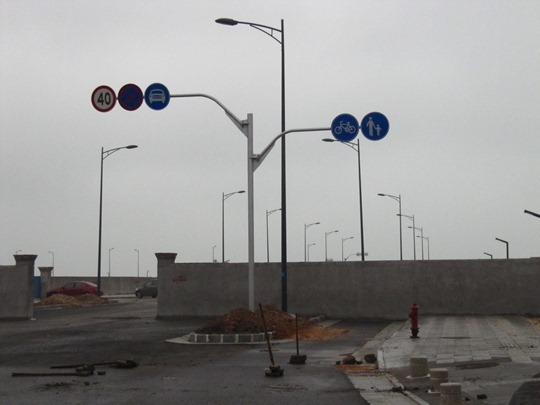 You can see in the photo above the physical separation between the motor vehicles and bicycles. These physically separated lanes are everywhere (when not prohibited by lack of space), and extremely comfortable to ride.

Here is a photo on a new road in a brand new development zone in Haikou: 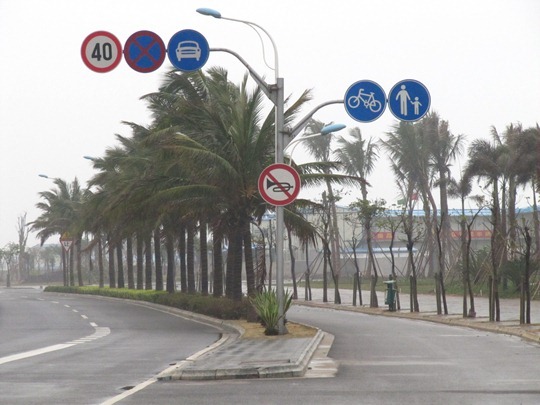 Some bike lanes are shared with motor vehicles. But vehicles drive much slower in this lane and only enter this lane when they are parking or entering a driveway. These are also common in the Netherlands, but they are virtually nonexistent in North America: 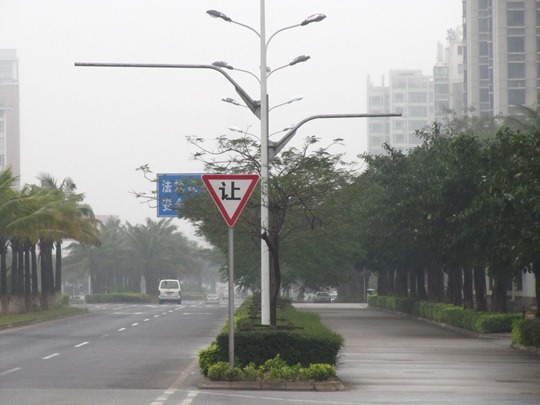 Including properly-designed bicycle infrastructure as standard planning in North America would provide what many North Americans crave: a comfortable alternative to driving cars. A way to avoid traffic jams. A way to get daily exercise without even thinking about it. A way to know exactly how long it will take to get to your destination – regardless of traffic.

But until we include bicycle infrastructure as a key aspect of road design we will always be fighting for short patches of bike lanes that seem to end even before they begin.

43 thoughts on “Democracy Is Good, But…”