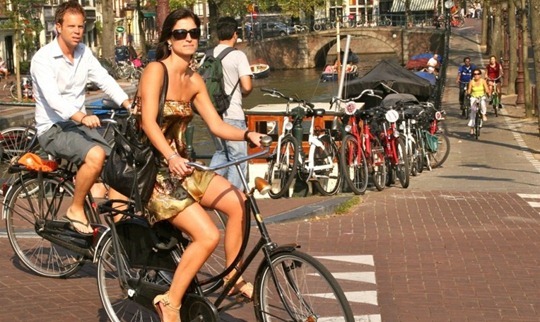 If our goal is to make our cities more liveable and bicycle friendly, there are several strategies that we can use to achieve this goal. I spend most of my efforts on this blog by trying to change people’s perceptions about bicycle transport in the hopes that people will try it out and enjoy it enough to convince one of their friends to do the same, and they will tell one of their friends, and so on.

A bicycle is just a pragmatic tool to efficiently get from point A to point B. It makes the journey fun, and is often faster than other modes of transportation – especially in densely populated cities.

Through the ‘i share the road’ campaign, I use another strategy where I aim to improve the relationship between drivers and cyclists. If drivers are more accepting of cyclists and willing to share the roads, it will be more comfortable to ride, and more people will – which in the end will also benefit drivers (and achieve the goal of making our cities more liveable).

People who ride bikes don’t want to ride in a sea of angry drivers who resent them, and drivers don’t want to be stalled in  a sea of traffic congestion. Thus when bicycling is uncomfortable, everybody loses.

A third strategy is to lobby the government to do their part to improve conditions for bicycling in our cities. There is much that can be done at the local level: get involved with your local representative, give a deputation at city hall, protest, lobby and much much more.

On the other hand, the provincial/state/federal government has significant power to enact legislation that can mandate provisions to improve our cities across the entire province/state or nation.

I recently co-signed a letter to the Premier of Ontario, Dalton McGuinty to urge him to enact legislation that would improve bicycle transportation for Ontarians.

Please sign and promote this petition to bring attention to the letter and the creation of legislation to make our cities more liveable.

Letter to Dalton McGuinty on Legislation for Bicycle Transportation

If bicycle infrastructure becomes part of regular road planning (as we currently do for sidewalks), bicycling will become more comfortable which in the end will benefit drivers and make our cities easier to navigate and better places to live.

8 thoughts on “Legislation For Bicycle Transportation”