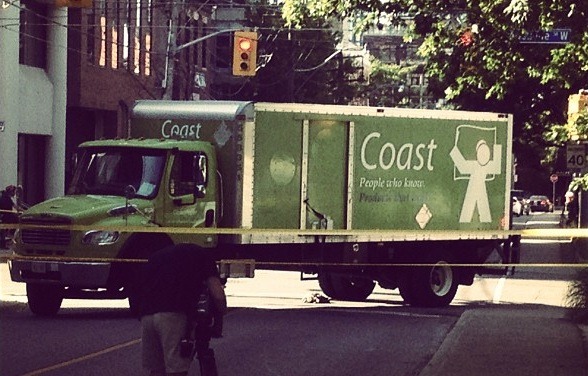 Photo by James Schwartz / The Urban Country (via Instagram)

Yesterday morning a 30-year-old woman who was walking downtown was hit by a truck, pinned under the wheels and later died from her wounds. The woman’s death is eerily similar to the death of Jenna Morrison last November. Jenna was also run over by the rear wheels of a turning truck that was lacking side guards.

Coincidentally, I was walking the same path as the deceased woman about 45 minutes after the fatal collision took place while taking my daughter to daycare. When I passed, the woman had already been taken to the hospital and all that remained was a large truck and a blanket underneath the truck in front of the rear wheels. The blanket was given to the woman by a construction worker who comforted the woman in her final moments of life.

This tragic loss is heart-wrenching, and sadly all too common. Eleven people, or “pedestrians” have been killed so far this year by motor vehicles in Toronto. Every four hours a pedestrian is injured in Toronto by a motor vehicle. That’s 2,300 injured pedestrians each year on average.

Death by motor vehicles are simply considered collateral damage in our car-dominated society. When a pedestrian is killed, it is common to hear a remark such as “they were probably talking on their cell phone while walking”, or “they were likely jaywalking” without even considering the driver might have been distracted or driving dangerously.

Unless the driver of the motor vehicle was intoxicated or grossly negligent, our media & society create excuses to absolve the driver from all blame, and drivers are rarely charged when pedestrians are killed.

Our society goes to great lengths to shift the blame and avoid getting to the root cause of these deaths in order to retain the privilege of driving dangerous motor vehicles unimpeded, without being held accountable for our actions.

Our society is all about personal responsibility – except when it pertains to drivers of motor vehicles. In those cases, society often places blame on the victim, labels the death an unfortunate accident, blaming the lack of helmet in bicycle deaths, or society looks for other external factors to shift the blame to.

The Toronto Star article covering the collision that resulted in the woman’s death clearly illustrates this blame shifting.

Here are all of the quotes in the article regarding the police investigation:

“Police will determine if the sun was a factor”

“Police will also determine if she (the deceased woman) was talking on her cellphone or was distracted.”

“Police must determine if the truck’s speed and whether the driver was turning on a green, amber or red light”

It is clear from the position of the truck that the woman was walking eastbound through the intersection on the one-way street while the truck driver was making a left turn. An investigation doesn’t get much easier than this.

If the woman was “jaywalking” through a red light, then the driver too was illegally running a red light.

It is also irrelevant to investigate whether the truck driver was driving over the posted 50km/h speed limit. If the driver was making a turn at an intersection at faster than 50km/h then I am fairly certain more than one person would have been killed.

Asking all the wrong questions

Clearly the police are asking all the wrong questions, or it could simply be bad reporting by the Toronto Star, making the Toronto police appear to be inept.

I am not advocating for extremely harsh punishment of the truck driver. He already has to live the rest of his life knowing that a 30-year-old woman died under his wheels. But he needs to be held accountable for his mistake and other drivers need to be told over-and-over that their actions can have deadly effects.

Education is very important, but we also to take traffic calming measures, and at the very least these types of trucks should be mandated to be equipped with side guards.

Insanity is doing the same thing over and over again and expecting different results. If we continue to shift blame from drivers and avoid getting to the root cause of the problem (dangerous, distracted, and aggressive driving of deadly motor vehicles), then these avoidable, unnecessary deaths will continue.

How many more of these senseless deaths will it take before our society starts to wake up and start taking preventative measures to avoid more deaths?

My sincerest condolences go out to the family of the woman who died yesterday morning while doing nothing other than walking to work. I hope something positive comes out of her senseless, avoidable, and unnecessary death.

82 thoughts on “Preventable Deaths – Asking All The Wrong Questions”