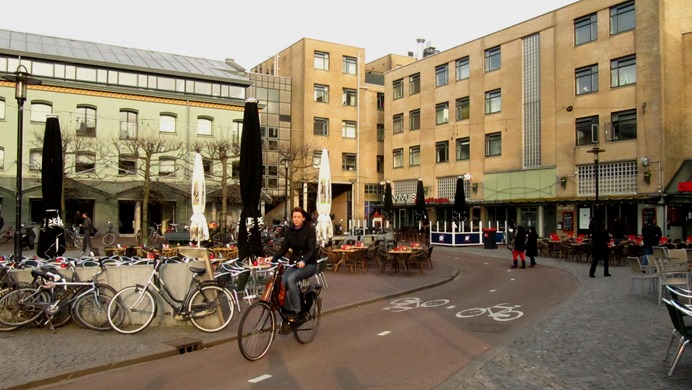 The following is a chronological summary of select content that we published to this blog throughout 2012.

In January while I was pedaling on a bike in China we reported that Apple’s Macintosh computer almost became known as the “Bicycle”. Meanwhile, 81-year-old Gene Hackman was hit on his bike while pedaling in the Florida Keys, and since Gene Hackman is rich, he is more likely to break traffic rules.

In our car culture, we certainly have an emotional affection for automobiles and since the same car culture frenzy is sweeping over China, it sometimes creates awkward moments for me.

While bicycling in Amsterdam, I noticed that parents drop their kids off at school using bicycles, not cars – and the great bicycle infrastructure that the Dutch are known for can also be found in the most rural areas. Amsterdam has the powerful effect of converting the least likely people into everyday urban bicyclists.

Meanwhile, while many parts of the world still use human power for everything from farming to transportation, back in Toronto it became clear that motorist convenience is far more important than improving safety even though cars no longer symbolize freedom.

After returning to Toronto, I picked up a cargo bike that allowed me to do some urban car free camping and commute to the airport with my luggage. Meanwhile, a skateboarder was killed by a taxi driver in a road rage incident, and taxi drivers resorted to blaming the victim, despite overwhelming evidence that the taxi driver intentionally drove into the skateboarder in a fit of rage.

Canada’s largest automobile advocacy organization showed that it is evolving by participating in a wonderful “watch for bikes” initiative.

Although the newspapers in Toronto were calling for mandatory bicycle helmet laws, they oddly refrained from promoting mandatory driving helmets – a no brainer way to reduce the harm of motor vehicles. They also failed to promote pedestrian helmets, looking for anything to blame except careless/distracted driving.

This summer, bicycle commuters were floating in China and in America bar patrons enjoyed a glass of beer on a bike on the PedalPub. My friend Mike Rubbo also made some wonderful bike art for our readers and I did some mountain biking in Texas.

We interviewed a lawyer and a Marketing Communications Coordinator who both commute by bike in Toronto.

While I was in New York someone tried to steal my bike, but the wheel lock saved me. In a three minute video I illustrated what my “Ideal World”. While the media tries to blame traffic congestion on weather and other external factors, I lay the blame squarely on the fact that we drive too much.

In China a woman died because her ambulance was stuck in traffic congestion. And in the USA one of the best basketball players of all time commutes to his games by bike, and the media says he’s childish and weird. Here in Toronto the victims are blamed for daring to cross a street and get in the way of the poor car drivers who can’t see anything in front of them.