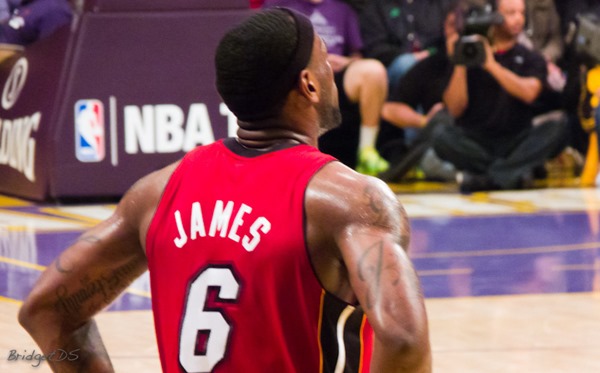 USA Today has reported that LeBron James rides his bicycle to and from his basketball games. This article made the headlines on the USA Today website because of how abnormal it is in America for a rich and famous basketball star to use a bicycle for transportation.

Instead of explaining the real reasons LeBron rides his bicycle to games, the article highlights how unusual LeBron is. It sounds patronizing and almost seems to be mocking James:

The Miami Heat star reduces his carbon footprint the same way a 12-year-old might, by riding his bicycle to basketball games. The 6-9, 250-pound three-time NBA MVP has been doing this for a while now, taking advantage of South Florida’s warm climes (sic). But that still doesn’t make it any less unusual.

LeBron probably rides his bicycle to games because he likely gets there faster than he would if he were stuck in traffic. It’s probably more therapeutic for him than being stressed out behind the wheel, and it probably clears his mind and relaxes him before and after his basketball games.

But the USA Today article didn’t acknowledge these benefits. Instead, James is an outcast. He’s doing something that only a 12-year-old would do.

In 2011 we covered Baltimore Orioles baseball player Jeremy Guthrie, who also commutes to games by bike. Guthrie also experienced the same reaction when other players saw him commuting by bike. But that perception soon changed:

Despite the fact that 32,367 Americans died last year in automobile collisions, “everybody is worried” about LeBron being on a bicycle. LeBron is a risk taker for riding a bicycle to the games. From the USA Today article:

“The other night, everybody was a little worried, but he’s a grown man so it’s fine”

I don’t fault the USA Today reporter for his portrayal of James. He was probably trying to be playful rather than patronizing. But the portrayal of James as an outcast only further reinforces the belief that bicycles aren’t truly a viable mode of transportation. This perception is systemic in our society because we have become so dependent on motor vehicles.

Perhaps 20 years from now an article entitled “NBA Player Drives Car To Games” will make headlines because it will be so abnormal and old-fashioned to drive an automobile to the game.

Right now it might be hard to imagine, since we are so embedded in the car culture frenzy that has enchanted us for the last 60 years. But thirty years ago it would have been hard to imagine that we would be walking around with small computers in the palm of our hands that are connected to the entire world 24/7.

Updated (Jan 4th), in this interview LeBron James is asked whether riding his bike contributed to how well he played the basketball game: