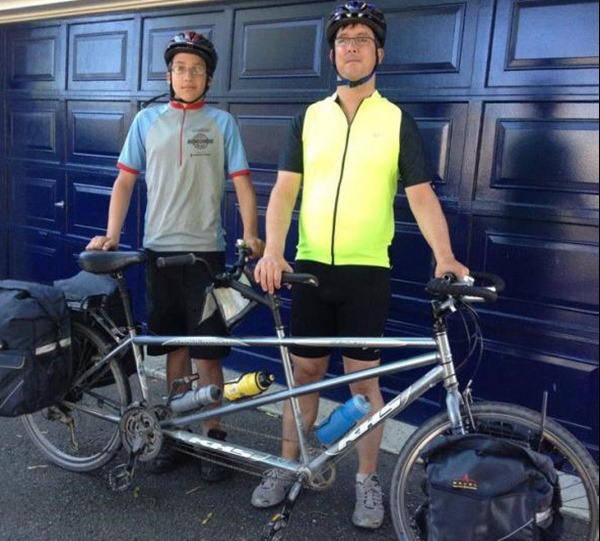 Last year, our friend Todd O’Reilly pedalled 1,500km with his 13-year-old son Daegan in a 25-day charity ride, from Toronto to Ottawa, to Montreal and then ending in New York City.

But instead of asking for donations for his charity, Todd had the brilliant idea to have people pledge an act of kindness for his 500 Kindnesses (http://www.500kindnesses.com) campaign.

In addition to the acts of kindness raised during the campaign, Todd also donated his tandem bicycle to Achilles International in New York City, “where it is being used in a program that pairs up sighted riders with blind or visually-impaired athletes who can ride as stoker on the bike.”

Todd would like to do another ride this year with his son, but he needs help to find a tandem bicycle to replace the one he donated at the end of his trip last year.

This year we are continuing the project and have raised 1,023 acts of kindness so far. We plan to ride again starting June 30. But we’re missing one important part. We’re looking for a new tandem bike to replace the one we donated. And we’d like your help. Tandem bicycles are not always easy to find, and come in differing sizes so not all of them will work for us – even the one we rode last summer would likely no longer fit Daegan who grew like a weed in the past year.

So here’s what we’re looking for:

So we’re asking you to keep your eyes open for us. Do you have a tandem bicycle in your garage that you haven’t used in a while? Does your neighbour? Do you have a friend who has one? Put us in touch and we’ll be eternally grateful.

The Urban Country would be happy to donate $500 towards the cost of buying or refurbishing a tandem bicycle to help offset the costs for Todd.

Please let Todd know if you can help him source a tandem bicycle. Or, if you haven’t already, please consider pledging an act of kindness.

One comment on “Help Todd Find a Tandem Bicycle”