You Are Wasting Your Life Away Sitting In Traffic… 9 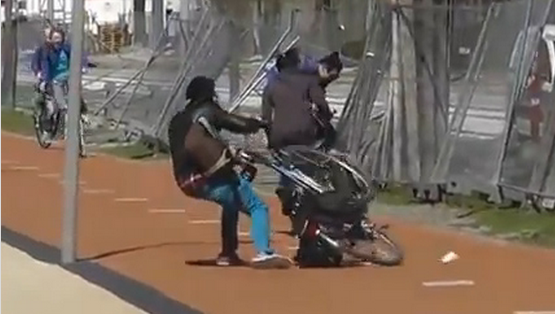 … But at least you aren’t on a bicycle.

Or so that’s the message being portrayed by the local newspaper’s automobile section.

Every year we see more and more bicycles on the streets here in Toronto. Instead of acknowledging that more people on bicycles means less traffic congestion for car drivers, many drivers seem to see bicycles as a threat.

Last week we wrote about a tabloid columnist who wants to ban bicycles in the city because he seems to think a 3-foot bike lane is the cause of the long line of traffic he sits in when he drives into the city.

Now the Toronto Star’s automobile branch, “Wheels.ca” has posted a video of people on bicycles in the Netherlands getting caught in a severe crosswind to portray bicycling as an inconvenient hassle.

There is some amusing irony in the fact that an automobile newspaper is using, of all places, The Netherlands as an example of a terrible commute in order to rationalize wasting their life away inside an automobile, while stuck in traffic, always running 30 minutes late.

From the “Wheels.ca” article:

“Nobody loves the morning commute. Except the Norse gods. Because watching Dutch cyclists battle gale-force winds ON THEIR BICYCLES is the most entertaining part of their day.

So the next time you’re locked in traffic on the Gardiner, the DVP, the QEW, or any of the other arteries into and out of downtown Toronto that, let’s face it, no longer work, just think of this video. And remember, yes, you’re stuck behind 30 tractor-trailers and you’re half an hour late.

But at least you’re not on a bicycle.”

Half an hour late, stuck behind 30 tractor-trailers. But at least you aren’t stuck on a bicycle in the Netherlands.

Below is a video that better reflects the average daily commute in the Netherlands. These people are in fact enjoying their morning commute.

But don’t send this video over to the editors at Wheels.ca. They wouldn’t have anything to complain about if they actually enjoyed their morning commute and made it to their destination on time.

Hat tip to Sheenagh Murphy for pointing us to the Wheels.ca article.