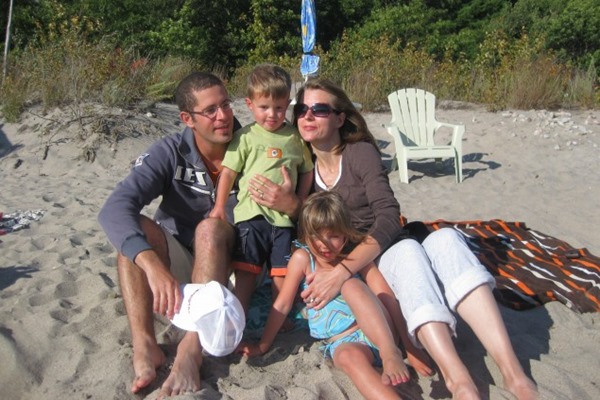 Tom Samson – the cyclist killed on Nov 23, 2012 with his family prior to his death – Photo courtesy of the Samson family

When Grade 2 teacher Tom Samson was killed on his bicycle early in the morning on November 23rd 2012, Toronto Police had told Samson’s wife that he was struck and killed by a van after Samson illegally went through a red light on his bicycle.

The driver of the van fled after killing Samson and was later charged with failing to remain at the scene.

Perhaps family members of other victims may have accepted the police version of the events and tried to move on with their lives. But something didn’t add up for Samson’s widow – Kasia Briegmann-Samson. Tom Samson was always a safe rider, and it didn’t make sense that he would have run a red light – nor did it make sense that he would be travelling northbound at that particular intersection.

So Briegmann-Samson hired a prominent criminal lawyer to probe the police investigation to determine whether Samson was indeed responsible for his own death or not.

Now that the death is being probed, the official version of the story has changed. It turns out that Samson was not running a red light at all, nor was he travelling northbound, as had been indicated in the official police report.

Samson was apparently stationary, or near stationary, waiting to make a left turn when he was struck and killed.

It also turns out that the 23-year-old driver who killed Samson had eight driving infractions between July 2010 and December 2012.

The Toronto Star highlights that the police in our car-centric society are quick to blame the victim rather than doing the work to perform a thorough investigation:

“A drug-dealing criminal who is shot and killed during a deal gone bad gets a higher degree of investigative services from the TPS,” Sapiano wrote in a letter to the Toronto Police Service.

A veteran Toronto police officer, whose husband was killed in 2007 while riding his bike to work, is quoted in the Star article:

“Part of the problem is you have these traffic investigators who’ve never ridden a bike before in their life, never cycled, and they really have no sense of what it’s like to be on a bike on the road,” she says.

“They investigate it from a very biased, driver-supported view, which I think happened in this case.”

She describes an interview that was performed by police with the man who killed her husband:

“it wasn’t an investigative interview at all; they already made up their mind. It was a formality.” No one was charged.

Tom Samson’s widow explains why society might tolerate these deaths and blame the victim:

She says that in some respects, people feel comforted when a victim appears to have contributed to his or her death. “It’s a big relief — that it’s a freak accident, he did something wrong. It’s reassuring and gives a completely false sense of security.”

Read the full article on the Toronto Star

Time after time we have seen victims being blamed for their own death – for not wearing a helmet, or for walking outside wearing dark clothing. The police tend to make excuses for drivers: “this was an unfortunate accident where the driver couldn’t see the pedestrian when he turned the corner”, or “it was dark outside and the cyclist wasn’t wearing reflective gear”.

In the absence of blatant driver misbehaviour, such as driving while intoxicated, drivers are more often than not let off the hook and not charged with the deaths they caused, often through negligence or distracted driving.

Sometimes the police and media blame pedestrians when their behaviour clearly had nothing to do with causing a collision. A recent article in the Toronto Star discussed pedestrian misbehaviour while discussing a collision where an illegal manoeuvre by a driver resulted in the driver mounting the sidewalk and injuring 10 people – including 6 pedestrians.

There are dozens of excuses and rationalizations that we make as a society to avoid the uncomfortable task of challenging our car culture and getting to the root cause of these deaths.

By blaming the victims, it saves police the time consuming task of doing a thorough, proper investigation. It reinforces society’s belief that cycling is dangerous and when a cyclist or pedestrian dies it’s nothing more than an unfortunate accident – collateral damage.

If a highway bridge were to collapse and someone was killed, you can be sure the root cause would be thoroughly and exhaustively investigated. Our society sees a bridge collapse as an avoidable situation. But police avoid thoroughly investigating cyclist or pedestrian deaths because our society views cyclist and pedestrian deaths as an acceptable cost to our car culture.

In reality, these are avoidable collisions and couldn’t be further from unavoidable “accidents”. If we continue to not hold drivers accountable, we will continue to have unnecessary, avoidable deaths on our streets.

Tom Samson was Toronto’s 39th traffic fatality in 2012. My deepest condolences go out to Samson’s family for the pain they have suffered as a result of his death as well as the salt on the wound caused by the apparent incompetence by the police investigation.