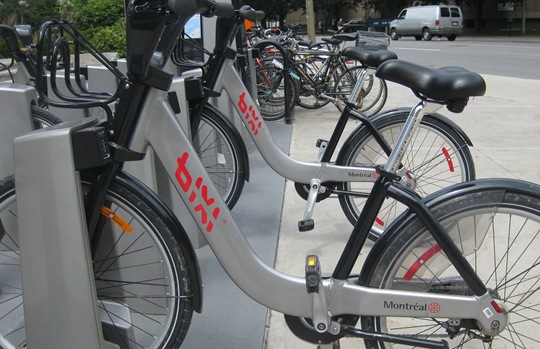 What do you get when you combine ‘bicycle’ with ‘taxi’? In Montreal they call it ‘BIXI’ and aside from a few technical glitches, the program has been a smashing success since it launched on May 12th, 2009.

I arrived in Montreal on Wednesday after paddling for 11 days from Toronto. I spent the next 4 days testing out the BIXI system to get the scoop behind this amazing idea that is finally gaining momentum in North America. The BIXI system is modeled after a similar program, Vélo’v, which launched in Lyon, France in 2005 and led to the creation of the largest bicycle sharing system in the world, Vélib’, which launched in Paris in 2007.

The $15 million BIXI program – the largest of its kind in North America – consists of 300 bicycle stations scattered around downtown Montreal; supplying 3000 bicycles that are available to anyone with a working credit card. A BIXI user can purchase a membership for $5/day, $28/month, or $78/year. The membership entitles the rider to unlimited use of the BIXI system, providing the first 30-minutes of each trip for free. Additional charges only apply if the bicycle is used for more than 30-minutes at a time. Like Paris’ Vélib’ system – which offers 20,000 bicycles at 1,450 stations – it encourages users to take short trips to increase the user capacity. 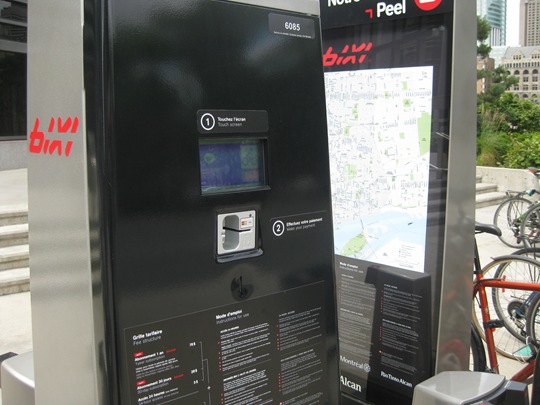 The world’s first known bicycle sharing program, White Bicycle launched in 1960’s in the Netherlands but failed due to theft and vandalism. Other bicycle programs didn’t survive due to lack of funding; specifically the Toronto BikeShare program that ran from 2001 to 2006 ceased to exist after it was unable to secure enough funding to continue its operations.

Today however, technological advancements have made bicycle sharing a viable and potentially profitable program. I caught up with BIXI employee Olivier – who was hired by  BIXI 4 weeks after its launch – and he strongly believes that the BIXI system will be very profitable, while Montreal city officials have stated that the system will pay for itself in only 3 years.

Each of the $2,000 bikes come with various anti-theft features. Olivier points out that the bikes were designed specifically for Montreal, so would-be thieves would have a hard time selling the bikes or the parts on the black market.

The single largest problem that BIXI has encountered since its inception is a defect in the bike locking system that allows a vandal or thief to lift the bike and crack it off the lock. I observed several stations that had damaged locking mechanisms. According to Olivier, these stolen bikes end up abandoned around the city and are time consuming for he and his colleagues to deal with – though he points out that this defect will be fixed by the manufacturer soon. 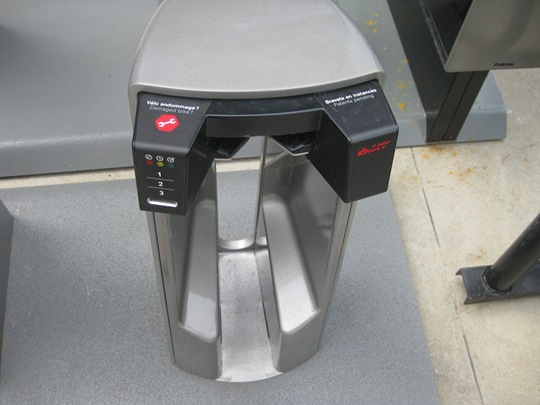 In addition to providing a great method of sustainable commuting in Montreal, the BIXI bicycle stations are powered by solar energy and are completely portable and wireless, so no land excavation is required for installation. BIXI was also ranked 19th in Time Magazine’s 50 Best inventions of 2008.

The glitches that I ran into in my 4 days of using BIXI ranged from a non-functioning touch screen, damaged bike stations, temporary credit card denials and a non-functioning key pad. I did come across the odd ‘full’ station when I was attempting to return a bike, but the stations are so common that I didn’t have to go far to find another station to return the bike. 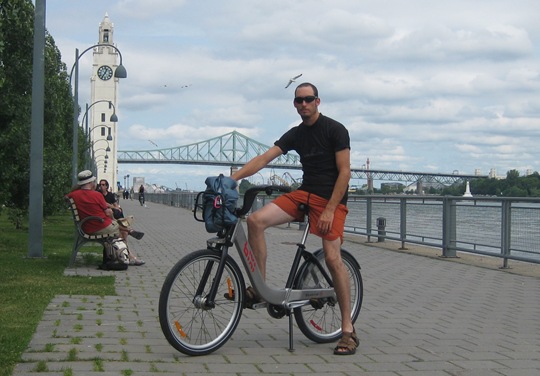 Despite these glitches I had an extremely positive experience with BIXI. It turns a 25-minute walk, or a $8 cab ride into a simple 5-minute (almost free) bike ride, and I can’t think of a better way to explore the different neighbourhoods in Montreal than by bicycle.

BIXI Montreal plans to add 2,000 more bikes to its fleet by the end of the summer at 100 new stations, bringing the total to 5,000 bicycles at 400 stations. They’re also trying to export the product to other cities in North America and Ottawa/Gatineau is currently operating a pilot program from June to September.

This is the type of system that I would most certainly use on a daily basis here in Toronto and the City of Toronto has its sights on the BIXI system with plans to potentially launch a similar system by next spring.

I’ll keep my fingers crossed, but I won’t hold my breath.