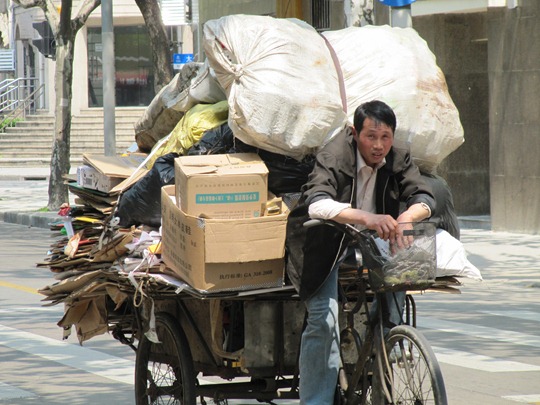 In big Chinese cities – like it or not – bicycles are a vital ingredient to keep the cities moving. From pizza delivery, to painters, to garbage pickup, to cargo shipping, to transporting people – bicycles are everywhere in cities like Shanghai and Beijing.

Unfortunately, in smaller cities like Haikou, Hainan – where I am currently staying – bicycles have all but disappeared from everyday life. Scooters, e-bikes, motorcycles, public transit and automobiles have become the primary methods of transportation and doing business in Haikou.

Bicycles in China are regarded as the poor man’s vehicle – so it is no wonder people jumped on the opportunity to purchase an automobile, scooter or motorcycle as their incomes increased. After all, smaller cities like Haikou have more space to store and park them than bigger cities in China and you typically have to travel further to get to your destination.

(Not the mention the sweltering heat in this sub-tropical climate where a 5 minute walk will leave your clothes dripping with sweat).

It is these reasons, I reckon – that bikes are still so prominent in Shanghai – where space is very limited and everything is closer together and expensive. Bikes are efficient, cheap, and take up very little space on both the roads and for parking.

But Shanghai has a choice to make. As automobile usage continues to rise, do they take away space from bicycles and scooters to make room to support more automobiles? Or do they encourage people to continue using bicycles instead of cars?

It’s very obvious in Shanghai that cars take up too much space to be a sustainable solution for the future of the city. When traffic is at a halt, you can watch hundreds of scooters and bicycles pass by on the cycle tracks while the cars wait.

Cars do serve an important need in cities, but the capacity of automobiles that a city can support is much more limited than bikes, scooters and motorcycles.

If you have any doubts about the usefulness of bicycles in China, I have snapped hundreds of photos over the past 2 weeks to showcase real Chinese utility cycling. Here are my 30 favourite photos:

These e-bikes are used for delivering KFC chicken – a very popular chain here in China: 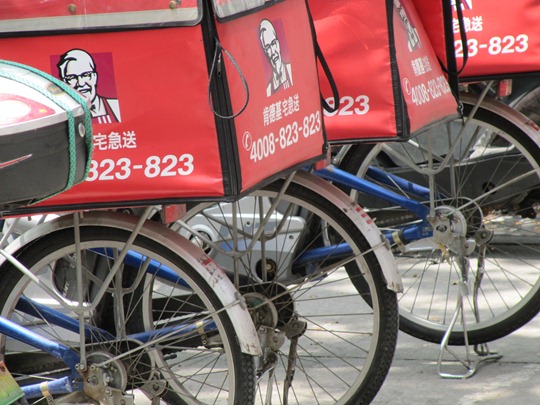 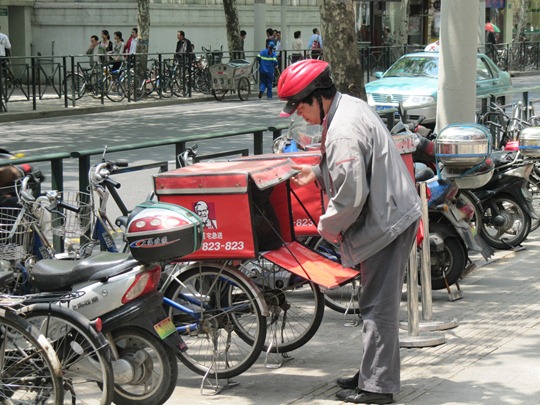 This painter is headed to work on his Dutch-style bicycle – ladder in tow: 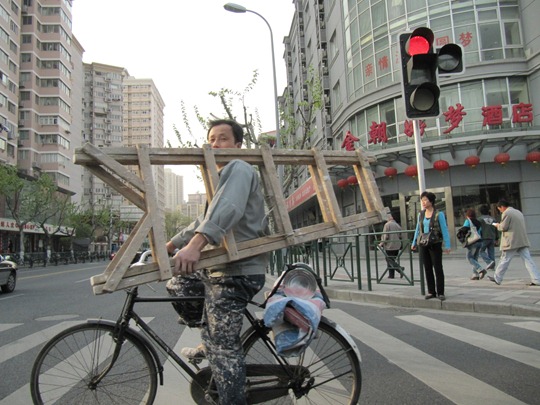 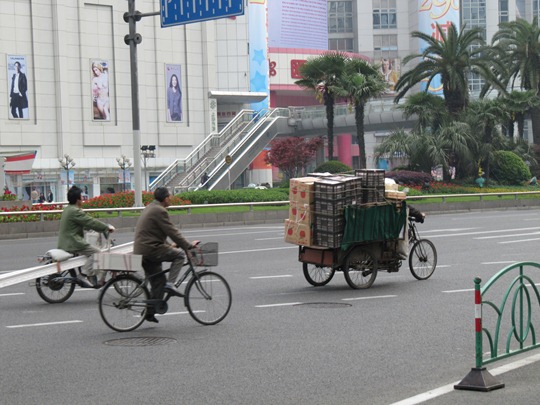 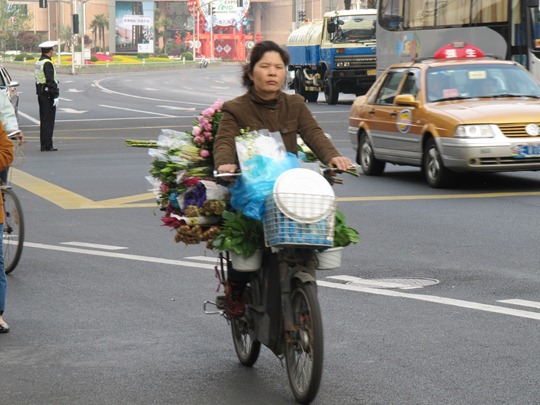 These cargo trikes are very common in Shanghai: 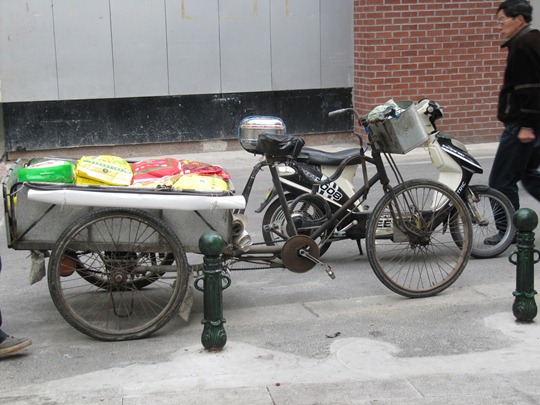 This city worker and her colleague were using one of these cargo trikes to pick up trash from the sidewalk and roadway: 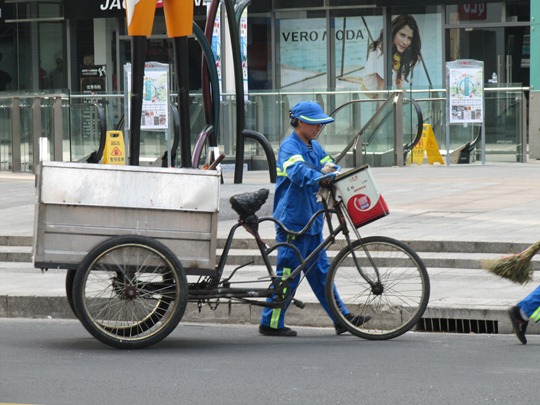 Here’s another trike packed to the gills: 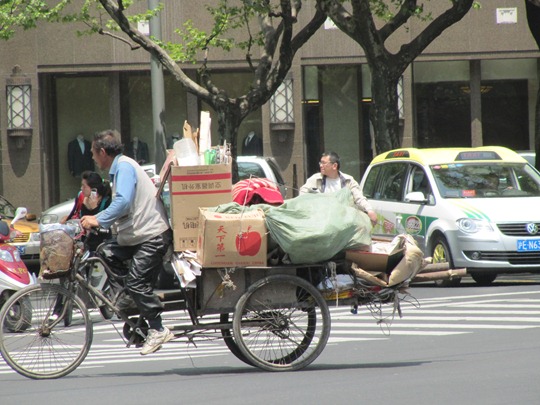 These gentlemen were transporting what appeared to be a bed. I captured this shot while they were taking the bed off the bike: 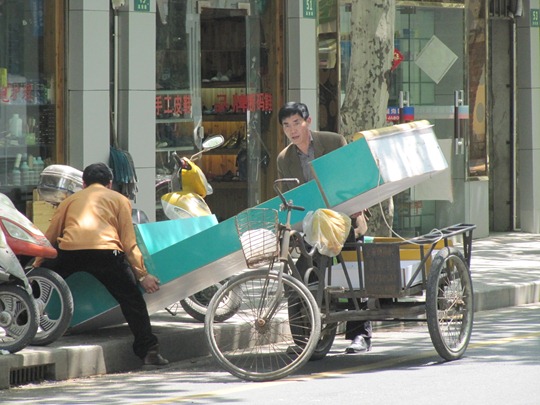 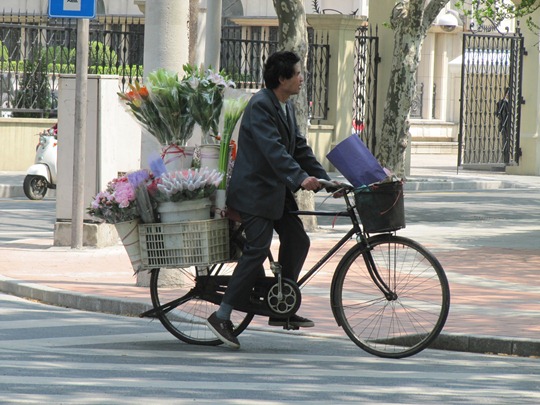 If you look carefully, this father son pair were transporting a big bag of something on the back of their bike. 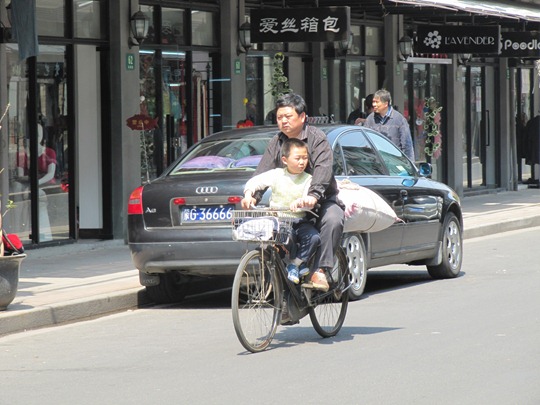 Here’s a snapshot from behind to better show you the big heavy bag tied to the back of the bike: 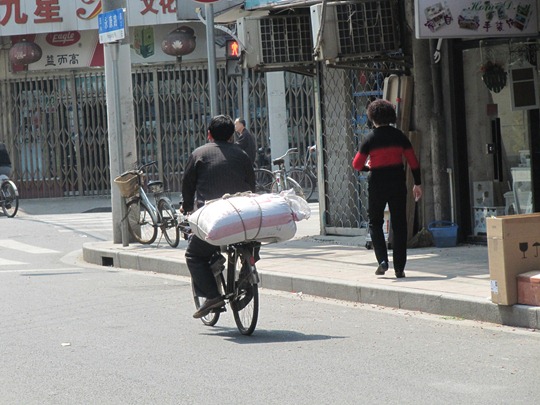 This trike is just sitting there idle right now: 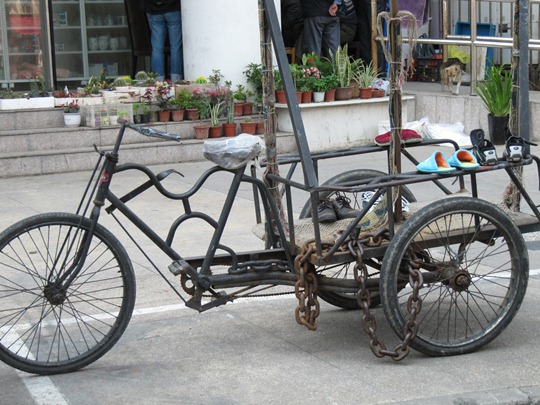 This is how they recycle in China: 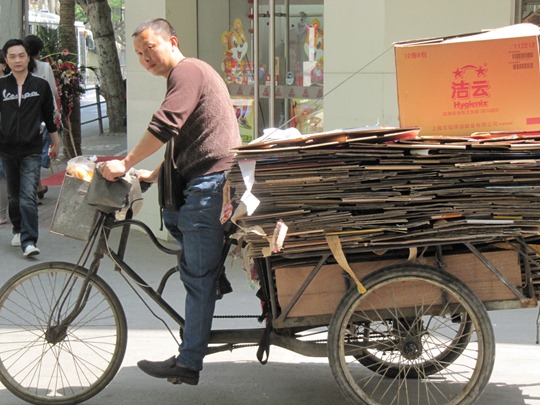 Sometimes these trikes are used as a “getaway car”: 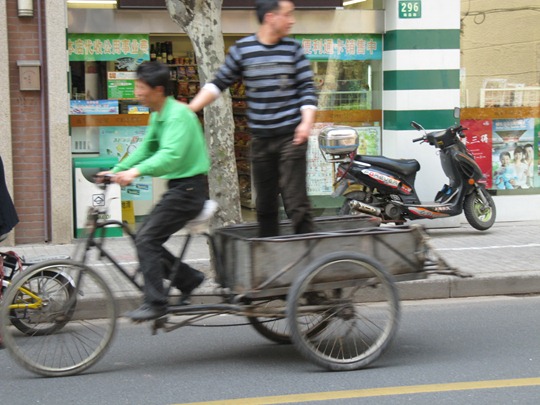 This labourer had everything he needs strapped to his bike: 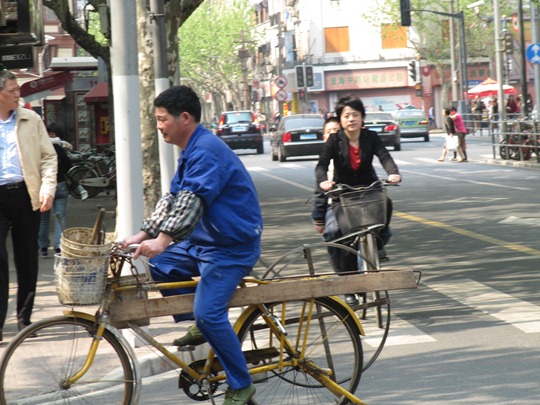 This trike was taking scraps away from a building renovation: 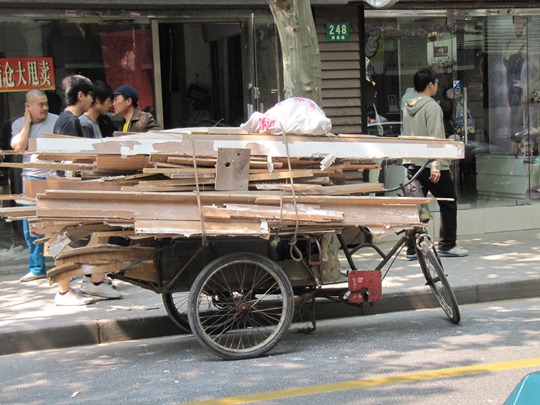 Yes, there is really a bath tub on the back of this bike: 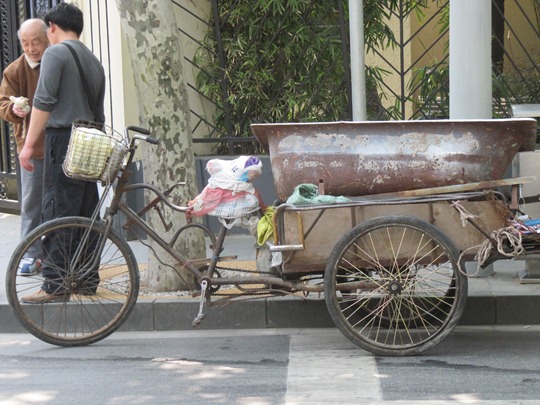 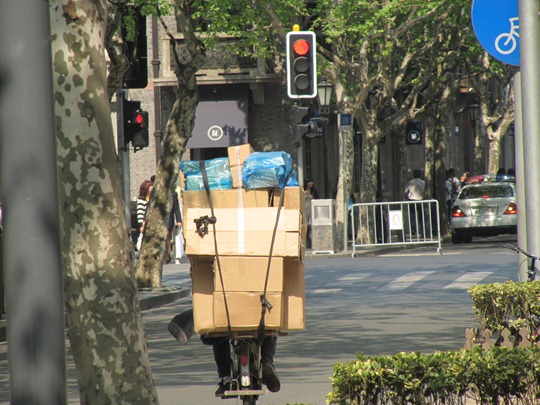 Another day, another trike: 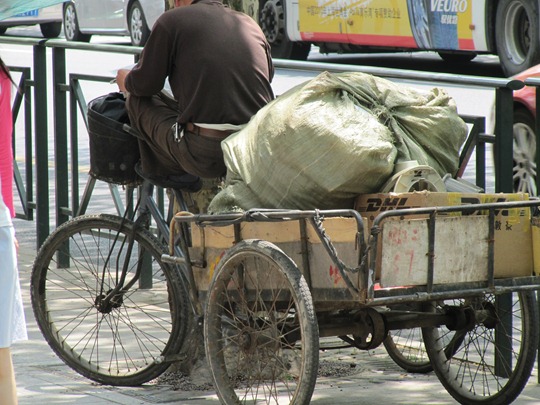 Yes, this guy is actually hauling a refrigerator on his bike: 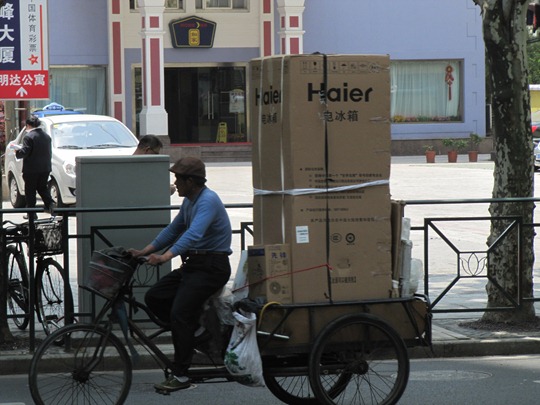 This worker was filling up the water tank on the back of his bike: 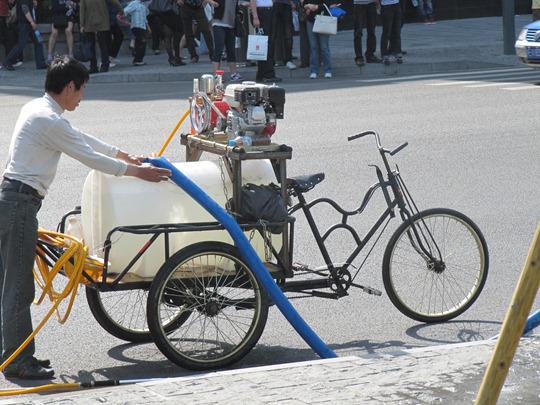 Where was he pumping the water from you ask? The fire hydrant of course! 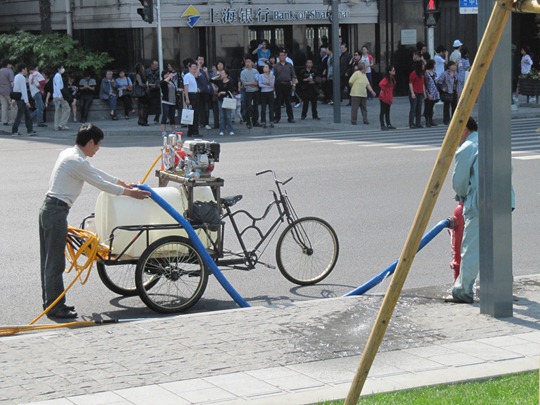 I’m not sure what this guy was planning to build. Some sort of cage perhaps? 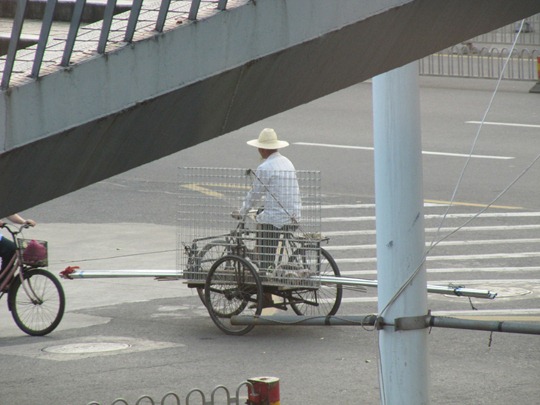 Yup, that’s a bed he’s moving on his bike: 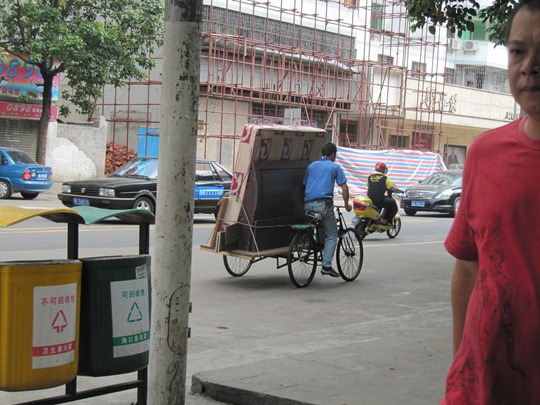 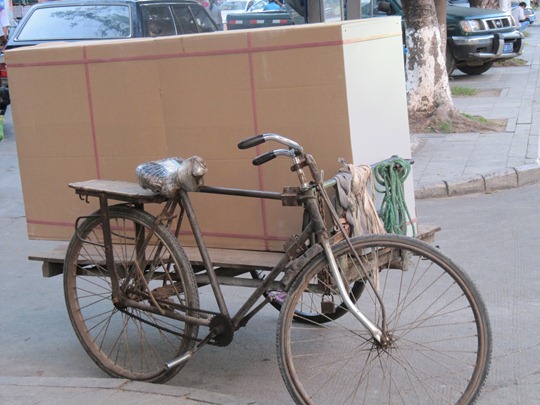 Whoa, this big screen TV is a bit heavy: 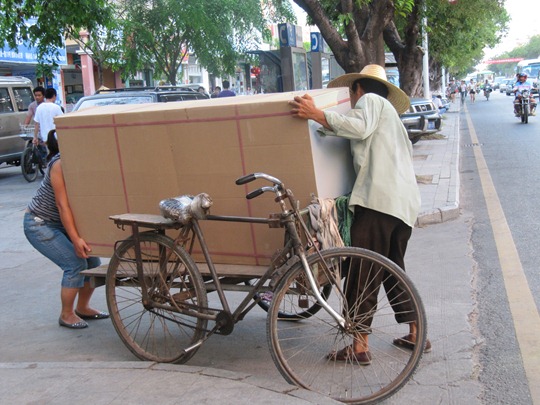 Fruit delivery on bikes is very common in China: 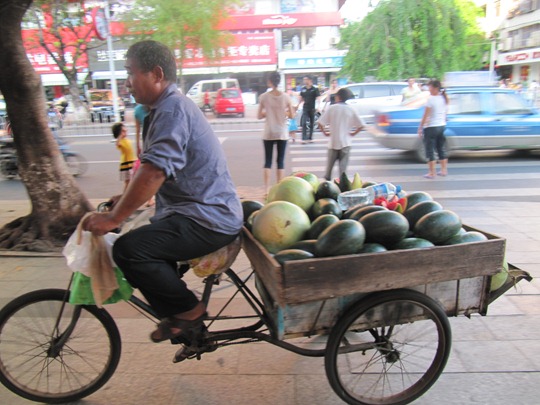 Here’s another city cleanup crew using a bike to pick up the trash and transport the workers: 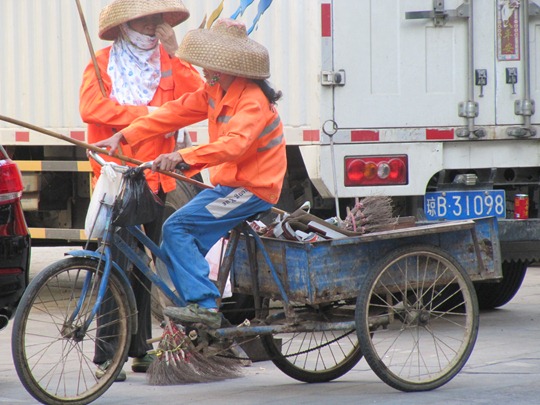 23 thoughts on “Utility Cycling in China”