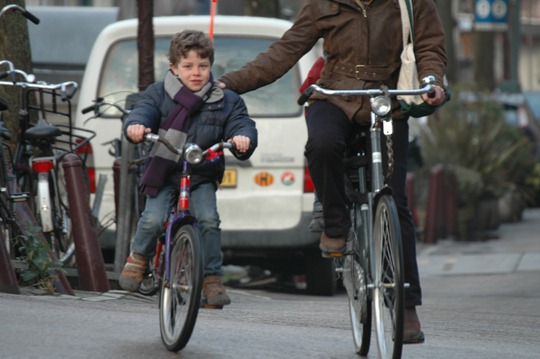 The topic of helmets often comes up on The Urban Country. It’s not really a topic we like to waste a lot of time on, because there are so many more important things we can focus on to improve the conditions for bicycles in North America.

The helmet discussion is a distraction usually initiated by non-cyclist politicians and journalists whose goal it is to distract citizens from the real issues.

This time the topic was revived by Toronto Police Sergeant Tim Burrows – the Traffic Services spokesman who recently posted an article with a photo of a mannequin cyclist with his brains splattered all over the road – telling cyclists that it’s their choice to have their brains splattered – or wear a helmet.

This is a common tactic used by the police to encourage people to wear seat belts – by showing mangled bodies in an automobile collision (I know, I know, this photo came from TreeHugger, so Llyod Alter is the one I should blame). The problem with using this tactic for bike helmets is that it discourages people from doing something that would benefit everybody.

These are some of the reasons why those in a position of power should be encouraging cycling, not discouraging people from doing it.

Unfortunately, showing a photo of someone with their brains splattered doesn’t make a non-cyclist want to make the switch to ride on two wheels – helmet or no helmet.

I know Sgt. Burrows has good intentions, and is trying to improve safety, but sometimes people need to look at the bigger picture instead of focusing on their narrow agenda.

Maybe Sergeant Burrows should have shown the photos of the aftermath of the tragic Quebec incident where a sleepy driver mowed down 6 cyclists, killing 3 of them. Then his readers could have seen the mangled racing bikes and little bits and pieces of helmet fragments left over. 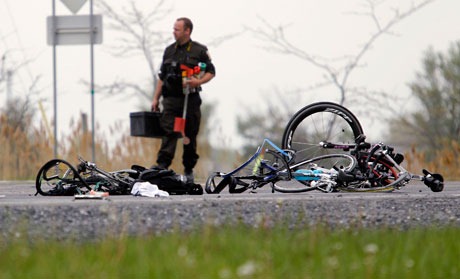 Photo courtesy of the Montreal Gazette

The fact is, even in Canada – where we have very poor cycling infrastructure compared to the Netherlands, cycling is still a safe thing to do. The media has perpetuated a sense of danger for cyclists that is both disproportional and completely unwarranted.

Even with all the safety features that come equipped inside automobiles, you are still more likely to perish in a car than you are on a bicycle. And when it comes to head injuries, for every million hours of travel, there are 2.2 bicyclists admitted to the hospital for head injuries, and 1.6 car occupants.

Therefore, if a cyclist spent an average of 30 minutes per day riding his bike, all 365 days of the year, he would be expected to have to go to the hospital for a head injury once every 2,490  years (or once every 41 lifetimes if he rides 60 years of his life).

So the probability of getting a head injury on a bike is very small – yet people in the media will play it up that you are virtually committing suicide by not wearing a helmet. 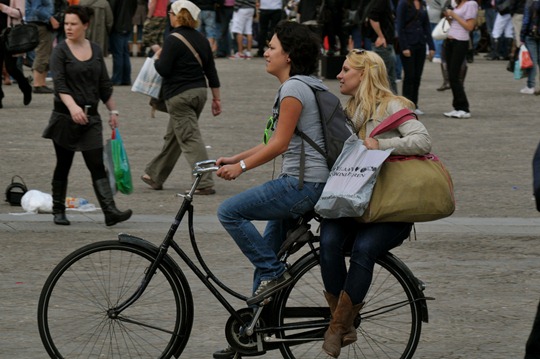 A few months ago, Spacing.ca’s Shawn Micallef made the illogical argument that anyone who doesn’t wear a helmet appears to be “frivolous and reckless” and that they don’t deserve better infrastructure because they don’t appear to care about their own safety.

Similarly, Sgt. Burrows says he hasn’t heard one solid reason for not wearing a helmet on a bike.

If a cyclist feels more comfortable wearing a helmet, that is completely fine with me. But chastising people for not wearing a helmet and supporting mandatory helmet laws does no good for anybody.

Why do people spend so much time telling cyclists that they should wear helmets, but don’t they don’t tell pedestrians, or joggers, or drivers that they too should wear a helmet?

When you look around the world to see how others are doing it, you will see that the safest country in the world to ride a bicycle is a country where 0.1% of the population wears a helmet. Surely they must be doing something right? 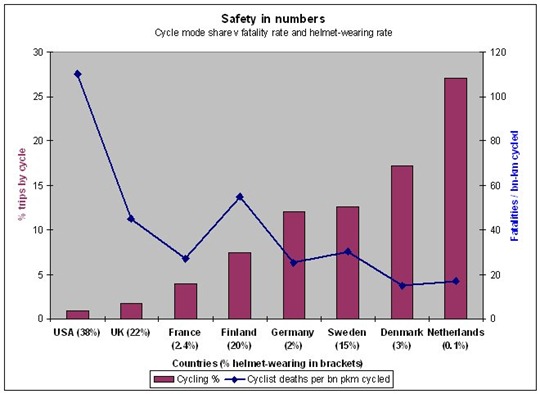 Instead of fooling ourselves into thinking that helmets are the silver bullet of cycling safety, there are much more productive things we can do to make cycling safer and more comfortable for everyone. Many of these ideas also come from the safest cycling countries in the world:

These are just a few of the things that cities in North America can do to make cycling even safer and more enjoyable for everyone.

It doesn’t come from slapping a plastic, foam-laced helmet on your head.

34 thoughts on “Bike Helmets Not Warranted”