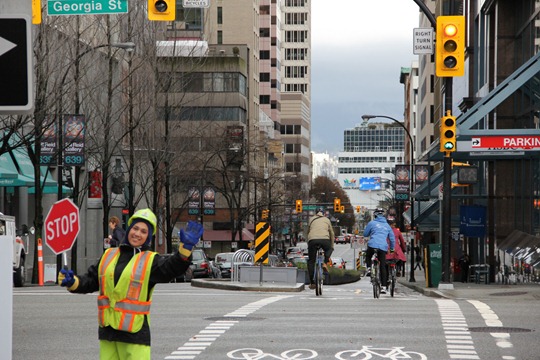 An article in the Toronto Star newspaper yesterday brought to light a plan to bring a modest segregated bicycle network in Toronto’s downtown core. This news would have been significant even with Toronto’s previous mayor, the “bike-friendly” David Miller.

What makes this news drastically more significant in 2011 is the fact that the plan is being brought by the Rob Ford administration – a mayor who has historically said that bicycles don’t belong on our streets.

Toronto is a city with tens of thousands bicyclists, but has a terribly inadequate, poorly maintained, non-segregated, disconnected network of bike lanes and routes where bike lanes are often treated as temporary parking by delivery trucks and taxi drivers.

The Ford administration is bringing forward a plan to bring Toronto its first curb-separated cycle tracks on downtown streets that either contain inadequate bike lanes, or nothing at all.

The measure is being cautiously hailed by me and many others in the city. If Ford is able to deliver this network, I have pledged to become a Ford supporter.

However, the Toronto Star article comments contain some genuine ignorance (and opposition) toward segregated bicycle infrastructure. And as always, the disingenuous trolls were out there spreading deceitful rubbish.

There seems to be five primary arguments against bringing segregated bicycle infrastructure to Toronto:

Some people genuinely seemed to think that drivers singlehandedly pay for the roads. Others were just trolling by calling for mandatory bicycle licensing, testing and registration to pay for bike infrastructure.

We all know that our roads are paid for by municipal property taxes – which are paid for by everyone – including bicyclists. And since bicyclists can only use a subset of the roads that their tax dollars are paying for, bicyclists are actually subsidizing motorists.

there are some on this post who argue that the city should pay to have segregated lanes for bicycles and yet feel they should not have to license their bicycles to help pay for these lanes.

GMP – Roads are paid for by everyone?

I thought roads and highway infrastructure was paid by the high taxes that we pay on gasoline.

not only would this help offset the total cost ( the monies could also be used for additional bike lanes) but it could also help in an emergency situation, god forbid something happens but should a cyclist become incapacitated and not able to communicate with emergency services the license could be used. I also think our police should crackdown and ticket some of these cyclist who run red lights, stop sign, not wearing helmets…etc under the Hwy Traffic Act as per the act, the license could aslo(sic) be used for this purpose as they do for motorists and/or when proper ID is not available.

If specific lanes are coming for cyclists, perhaps it’s time they paid for their part of the roads.

Commenter Joe LaFortune made some great points on why licensing bicycles makes no sense:

Inevitably in these, um, discussions, there are those who call for cyclists to be licensed. Here is why it is not likely to happen: motorists are licensed because they operate large, heavy, fast vehicles with the capacity to kill and severely injure. Toronto alone regularly sees about 60 deaths involving motor vehicles every year with several hundred serious injuries and billions of dollars in property damage. They are a serious threat on the roads to all other road users. Cyclists ride relatively light-weight, low-speed vehicles that cause few collisions (approx 10-15% according to TPS annual figures) and cause very little property damage. In other words, they are not a serious threat. Most adult cyclists are already licensed and insured drivers. Licensing has not made motorists any more law-abiding or safer (960,000 tickets issued by TPS in 2009 vs 2,800 to cyclists). Roads are public space to be shared by all.

“someone better think this one through a little further. The curb will become a hazard for the cars! They are difficult to see because they are so low and it is very easy for a car to “mount” the curb, becoming trapped”

I’m both a biker and a driver, and this proposed system won’t work for either constituency. 1. There will be a rash of cyclists getting “doored” on the passenger side of the cars, 2. How are these narrow paths going to be cleared in the winter time? and 3. There will be countless accidents from drivers making right hand turns (at both green and red lights) across the bike lanes.

rgibson2 – Curbs could make it worse for most cyclists:

c9dxmo – And when it snows:

Guardian Aspect – This will only create problems:

… when cyclists, with an illusion of safety, zip into an intersection, right into the blind spot of a truck who was there first and was just about to turn right. Then it will be chalked up to the driver’s carelessness, despite the fact that these kinds of accidents are entirely caused by poor design. In fact a study in Helsinki found that segregated bicycle lanes actually *increased* the rate of accidents! This dogmatic, impractical, ideological project is one gravy train that Ford needs to bring to a stop.

Curbs between bike lanes & driving lanes are a ‘ridiculous idea’. In an urgent situation, emergency vehicles need close safe access to the sidewalks, as do vehicles stopping toa(sic) drop off, children, seniors or handicapped people who would need to negotiate an extra curb to get to the sidewalk. Snow removal & street cleaning too, would be slower & more expensive because the equipment & plows woulds(sic) need to Double Dip, roads, & bike lanes separately. Curbs will also jacks up the installation costs of new bike lanes.

European cities like Copenhagen or Amsterdam typically have cycle tracks that are plenty wide enough to overtake another bicyclist.

To prevent “door prizes” when parked cars are present, a buffer zone should be built in. New York’s 9th Ave is a good example of how you can have a buffer zone beside parked cars – however, this requires more space.

Vancouver’s Hornby bike lane and Montreal’s segregated infrastructure don’t have this issue because for the most part, cars aren’t allowed to park directly beside the curb. But in the places where cars are allowed to park next to the curb, the curb is wide enough to create a buffer for car passengers to get out without impeding bicyclists.

Regarding curb visibility, drivers don’t currently have any issues avoiding the curbs on our existing sidewalks, so I don’t see how this will be much different.

For clearing the bike paths of snow, Toronto already has small plows it uses to clear sidewalks and the waterfront recreational trail in the winter. There’s no reason why they couldn’t use these plows to clear segregated bike lanes.

A common argument is that Canada has 4-6 months of winter. In Toronto, this certainly is an exaggeration.

Toronto’s average high temperature is only below zero degrees Celsius for two months out of the year (January and February), and on average there are only a handful of days each year that it gets enough snow where riding a bicycle in the city is challenging.

If you’re still not convinced, leave it to the Dutch to convince you that bicycling can be done year round – even through one of the worst winters the Netherlands has ever seen (2009/2010).

I understand the safety issue. Just curious if we know how many people actually use these bike lanes? During our 4-6 months of winter? Cover of Macleans “Stuck in Traffic” and how we spend 32 working days per year stuck. Sure more bike lanes will help with that. How much does all this cost?

What about snowmobiles, will they have a dedicated lane too? How will snow be removed from these tiny bike lanes? These lanes are nothing more than accomodating(sic) someones(sic) recreation, our climate does not allow bikes as a proper method of full time transportation.

You guys are working on the assumption Toronto is right next to Miami Beach.

This is the silliest argument I have ever encountered: that all bicyclists don’t obey the rules, so we don’t deserve proper infrastructure. If this was a pre-requisite for building roads, then we wouldn’t have any roads, because many motorists break the rules every single day as well.

In fact, on the highway, you would be hard pressed to find a single car that isn’t breaking the maximum speed limit law.

busterx1 – Never in my lifetime:

If cyclists want access to more bike lanes with better protection they should learn the rules of the road FIRST. If I drove my car they way cyclists drive around the city I’d have my license taken away. Tax the bikers. Require registration fees, police MUST enforce the rules of the road and require licensing with testing just like cars. If I can’t drive drunk or weave in and out of traffic at will then the cyclists should suffer the same fate.

DTR2 – No need for bike lanes:

bikers ride on sidewalks all the time. Yesterday I was almost hit by a madman at Bloor and Avenue Road. He was zig-zagging between cars and pedestrians.This happens every day all over TO, Cops do not seem to care.

socialactivist – there are people riding bikes at night…with no lights or reflectors…:

I am just amazed regarding idiot bikers…who expect…car drivers to see them at night with no reflective gear…Time to change the rules for bikers….to focus on safety…….on the road…

The more people we get on bicycles, the more space there is on the roads for motorists. Bicycles only take up a fraction of the space that cars take, so as far as capacity is concerned, bicycles are far more scalable than automobiles.

To make bicycling more enticing, proper infrastructure is important, and the more desirable bicycling is, the more room drivers will have for their cars on the roads.

Spliceit – Bike lanes in Montreal are a whole lane wide:

Toronto is not full of one way streets and taking away a live lane to accomodate(sic) a few bikes will cause more polution(sic) from cars idleing(sic) in the traffic. Just like those stupid HOV lanes, more polution(sic) is put in the air due to the traffic jams caused by taking a live lane out of the equation. The engineers/planners who thought that up should be fired.

tax to death – Change the traffic light policy not put more concreate(sic) in:

How about stop frustrating drivers, by timing the lights to make you stop at every intersection.(each light is connected to a centralized computer system with software designed for this purpose) It would make it safer for both Pedestrians and Cyclists. I go to cities where the lights are timed to facilitate the movement of traffic. People are friendlier drivers and less aggressive.

Johny Smith – Are you kidding me?:

Seriously?!? Enough with the bike lanes. Traffic is bad enough. If it’s not more streetcars, it’s more bike lanes… It’s us drivers that pay for the roads, so when do we get consideration? They ruined Dundas St. E. and Eastern Ave with bike lanes. Traffic crawls and there’s rarely any bikes…