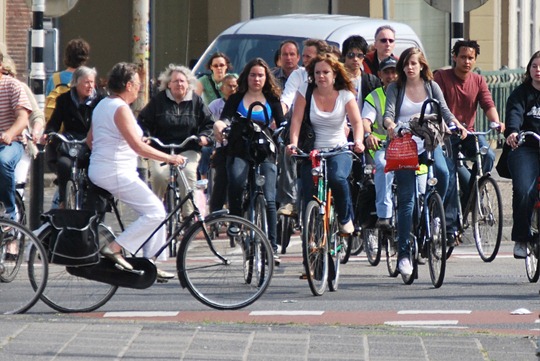 Photo of a hectic intersection in Groningen, Netherlands by tup wanders

I always enjoy hearing this argument, because I actually get a laugh out of it because it is such blatant rubbish. The hypocrisy in this argument is astounding – particularly when argued by a motorist.

Although amusing, this argument lacks substance and unfortunately contributes to stifling any progress towards making bicycling safer in our cities.

To make matters worse, this argument is sometimes used even by people who would consider themselves *bicycle advocates*. They say they feel awful every time they see another bicyclist roll through a stop sign or red light, because we can never expect to be accepted on the streets unless we obey all of the rules.

If you honestly think that bicyclists need to obey every rule of the road in order to be “accepted” and not be intimidated by angry drivers, then you have bought into motorist propaganda and you are making excuses for road rage.

You have been fooled, and you are contributing to distracting the public from focusing on measures that will improve safety for bicyclists.

In fact, the notion that motorists have the right to threaten and intimidate all bicyclists because they saw a rogue bicyclist run a red light last week is completely absurd and unacceptable in a civilized society.

These are the real reason they are angry, and telling you they are angry because some bicyclists break the law is simply an attempt to justify their own rage.

Motorists disobey the law every day

Imagine for a moment that the tables were turned, and we told motorists that they aren’t allowed to use the roads unless they obey all traffic rules. We would not have ANY automobiles on the road. None. Zero. Zip.

Motorists disobey the rules of the road every single day. Here in Toronto you would be extremely hard pressed to find a *single* driver who *never* goes over the speed limit (excluding in traffic congestion). I once drove the speed limit (100km/h) on highway 401 (equivalent to an interstate highway) and people were angrily honking at me because I was going too slow. And this is in the far right lane of a 12-lane highway.

Virtually every driver on our highways breaks the law every single day. If you told me you knew someone who never breaks the law, I honestly wouldn’t believe you.

And it isn’t just the speed limit that drivers disobey every single day. I often ride my bike through side streets littered with 4-way stops to commute 10 kilometres to a client office in mid-town Toronto.

At these 4-way stops, you would be very hard pressed to find a *single* driver who makes a full stop without rolling through the stop sign. The rare time that you do see a driver make a complete stop only seems to be when another driver, bicyclist or pedestrian is impeding the motorist.

And the list doesn’t end there. Motorists too frequently dangerously roll quickly through red lights while making right-hand turns. It’s also illegal here to hold a cell phone or electronic device while driving, and a day doesn’t go by where I don’t see several motorists on their phone.

These motorists *are breaking the law*.

Our society has decided to turn a blind eye to these minor infractions because we feel the risk doesn’t warrant the additional effort required to enforce it. But it’s still breaking the law, plain and simple.

So to say that cyclists must obey the law if they want to use the roads is disingenuous and hypocritical.

The police have the means to hand out tickets to both drivers and bicyclists – and they often do. In fact, here in Toronto running a red light will cost you $315 – the same fee for both motorists and bicyclists.

However, the bicyclists that I see running red lights are doing it at quiet intersections when there is nobody in the way. They aren’t putting anyone’s life in danger, and they have an intrinsic incentive not to die so it’s in their interest to be aware of everything around them.

Cars can be dangerous weapons

On the other hand, when a motorist runs a red light, they are putting other people’s lives in danger. Cars can be dangerous weapons. So if an officer decides it isn’t worth her time to write a ticket for a bicyclist at a quiet intersection, it’s probably because the risk was so low (the same applies to pedestrians).

But that’s not to say that bicyclists don’t get ticketed here. Just a few days ago I saw a bicyclist getting a ticket for running a red on my way to work. It’s not uncommon for police to hand out tickets here – and “blitzes” to crack down against drivers and bicyclists come and go.

But police also have the means to hand out tickets for drivers doing 15km over the *maximum* speed limit. But do they? Not here in Toronto. You won’t get a speeding ticket unless you are doing at least 20km over the speed limit on the highway – and even that would be a stretch because so many people drive 30-40km over the limit.

Thus, the police have deemed 10-15km over the speed limit to be not worth their time to enforce, so they let it go.

They will either become quiet, or they will be lying.

* To be clear, I am not advocating for breaking the law. Being courteous to other road users is important in a civilized society, so using common sense and courtesy to others is extremely important for us all to co-exist peacefully. However, when a motorist tells you that you don’t deserve to use the roads because some bicyclists don’t follow the rules, you should ask them to get their house in order.