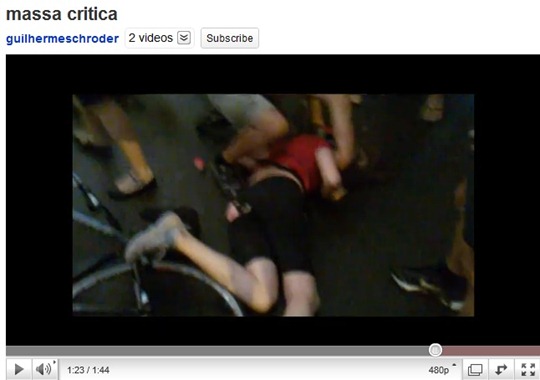 Screenshot from the aftermath (see embedded videos below)

On Friday night an angry motorist mowed down a group of about 150 people on bicycles riding for Critical Mass in Porto Alegre, Brazil. The motorist accelerated his vehicle directly through the group of riders, injuring at least 15 riders and sending 8 victims to the hospital ER (the number of reported injuries varies across sources).

At the time of the original posting of this article (February 26th) this callous cold blooded attempted murder hadn’t made the news outside of Brazil, so this article consolidates the information gathered from various Brazilian news articles. The mainstream English media are finally reporting on this story as of February 28th.

The following video shows the car plowing through the crowd and also shows the aftermath and eyewitness accounts:

Court has ordered the arrest of Ricardo Neis

Update March 1st, 9:35PM: Late on Tuesday evening, the court has ordered the arrest of Ricardo Neis based on the evidence that has been provided. Neis had reportedly checked himself into a psychiatric hospital this afternoon before the court approved the arrest warrant this evening.

Thanks to everyone who helped bring international exposure to this terrible incident and help put pressure on the courts to charge the accused for his inexcusable actions on Friday evening.

Charges have been upgraded to attempted murder

Update March 1st: The accused, Ricardo Neis was originally charged with criminal negligence (without intent), but on Tuesday the police decided to upgrade the charges to attempted murder (with intent) after completing interviews yesterday with the accused and witnesses. From the latest on Zero Hora:

“In testimony he was able to verify that he was aware of the consequence of the attitude. The testimony convinced the sense that we needed to know whether he had the real sense. And we found it: he, in a state of panic, as reported, has told us clearly that he was aware of the consequences of that act – the chief explained Rodrigo Garcia, communications coordinator of the Civil Police in Rio Grande do Sul.

According to Garcia, the police eventually changing the classification of the criminal investigation because of the clear science that Neis had about what would happen if he accelerated on to the riders. The case had been registered as criminal negligent injury (not intended) but was changed after the deposition of the hit.”

Below is a photo of Ricardo Neis speaking to the press: 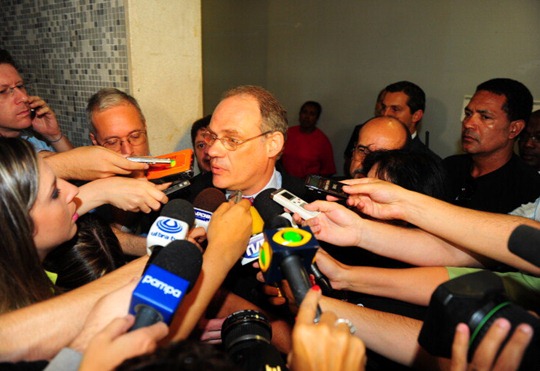 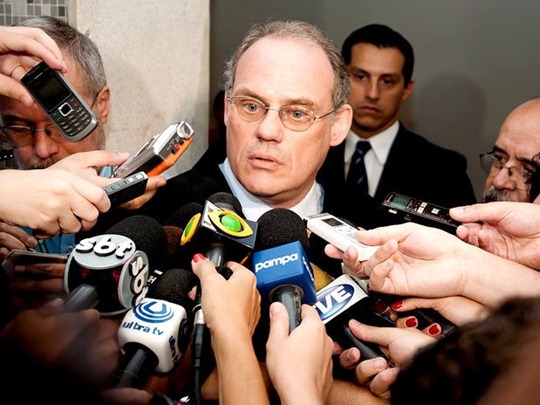 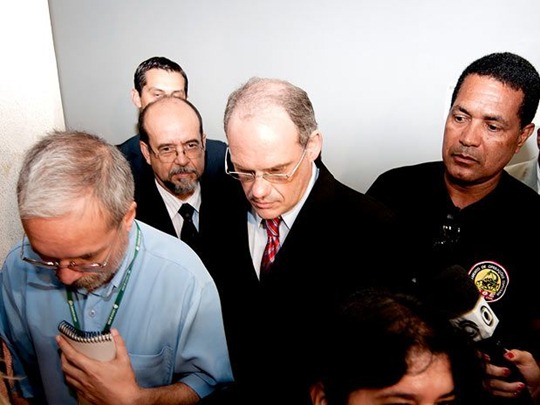 Police chief says investigation should be complete within 30 days

Updated Feb 28th: According to Zero Hora (translated by Google):

The police chief Gilberto Montenegro, overseeing the case of the driver who ran over dozens of cyclists in the Lower Town neighborhood in Porto Alegre, said he planned to complete the investigation within 30 days. The holder of the Bureau of Crimes, Traffic said on Monday about 10 people were interviewed, among them Ricardo Neis, 47, the driver in the collision.

“It’s a complicated case, but we’re working. The investigation continues in full swing. We hear many people today and tomorrow we hear a lot of people too – he explained.”

The testimony of the officer of the Central Bank took about three hours. According to the chief, Neis was quiet.

It’s baffling that he wasn’t charged with attempted murder in the first place, but I’m glad the investigators came to their senses and upgraded the charge.

Driver claims he was defending self and 15 year-old son

According to Brazilian news agency Zero Hora, the driver has turned himself in to police and is claiming he acted in “self defence”. His defence is almost as unbelievable as his actions on Friday evening. Translated from Zero Hora:

The banker Ricardo Neis, 47, who ran over dozens of cyclists in the Lower City, on Friday granted a quick interview at the Bureau of Crimes, Traffic. He said he was surrounded by demonstrators and that he felt threatened, so he took the decision to proceed with the vehicle.

Neis assured that it had no intention of crushing cyclists, but tried to flee after a group began to beat on your car. Asked if he would take the same attitude again, he said “would not have left home.”

You can watch the videos and determine if you think this is an act of self defence or not. I hope the authorities bring justice to this matter. It’s up to the Brazilian people to not stand for corruption and demand justice and it’s up to us to apply international pressure on the Brazilian authorities on behalf of these innocent people who were mowed down by Ricardo Neis.

The following video shows a first-hand account of the Volkswagen Golf plowing through the group of people peacefully riding along on their bicycles for the monthly Critical Mass ride (the car rams the group at 0:52 of the video) WARNING: This is a graphic and up-close video of this terrible incident:

The Volkswagen Golf involved in the incident was found abandoned: 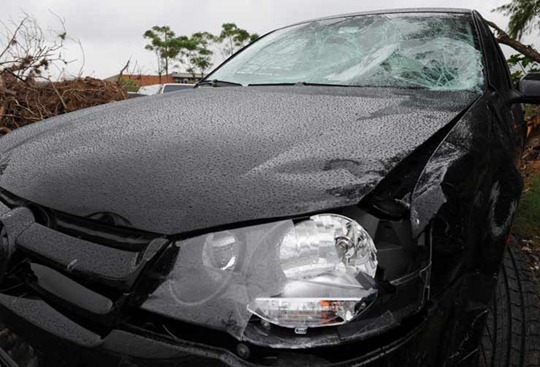 “The lawyer called us saying he represents the owner of the car and the owner was driving the car at the time of the facts. He said he would present the client to provide information on what happened,” said delegate Gilberto Almeida Montenegro.

Although I completely disagree with placing any blame on these peaceful bicyclists, for what it’s worth a reddit commenter living in Brazil describes the situation through an expat lens:

1) This is Brasil…not the US, Canada, or anywhere in Europe. Although people in those areas may piss themselves on a regular basis on the sight of cop while driving, here is another story. The police don’t stop people here for infractions unless they are running a “blitz” (similar to a road block), you hit someone (or something) and actually stop, or do something so spectacularly stupid in front of them that they NEED to stop you. Other than that, people tend to do what ever the fuck they want on the roads.

2) Road rage (at least here in the south of Brasil), is getting more and more common. As I stated in other threads about this case, the people here are afraid. Most won’t use their horns unless it’s a last resort, due them being afraid that even honking their horn will incite violence. I’ve personally been CHASED (tailgated at less than 1 meter, lights flashing, the other driver making “gun” forms with his hands, etc) by other motorists for kilometers for doing nothing more than honking at someone who ran a red light.

3) These cyclists, even though their cause may be in the right, did mostly everything WRONG. Yes, in a perfect society everyone follows the laws, but no one, anywhere , lives in a perfect society. Knowing that what you are doing has the chance of provoking the mentally unstable or criminally minded into action means you lack the common sense and responsibility to be an adult.

4) Once they get the driver, don’t expect a whole lot. He’ll be out on bail within a day with a half-way competent lawyer (just a few weeks ago a drunk driver killed a whole family and walked out of jail the next day). If we are lucky they’ll have a trial within a year or so…depending. Also note that the maximum they can serve is 30 years…no matter what. There is no life sentence here…also no death penalty.

Below are some eyewitness accounts of the tragedy pulled from various sources.

“I am here at the Critical Mass ride. A car just ran over with the entire critical mass ride. At full speed! A black VW Golf. He hit everybody!! Are you seeing this?!

What a horrible thing… oh my GOD. Someone call the police, call the ambulance

Police! Call the Police!! The Ambulance!

Everyone is scared, son.

This is the most horrible thing I’ve ever seen! I cannot believe”

Upon reaching the corner of Rua Luiz Afonso, the driver of a black Golf, who was driving behind the group since the beginning of the track, would have accelerated, hitting cyclists.

“The car passed by my side, it was a horrible scene.There were people being thrown all sides” – tells the rider.

After being hit, the driver fled the scene. Dozens of bikes have been broken.

From Correio Do Povo:

When the accident happened, the group occupied the Jose do Patrocinio and agents of the Corporation for Public Transportation and Circulation (EPTC) were diverting traffic. The Golf was behind the cyclists arrived and to honk once before going through the group.

Interesting that this media outlet should characterize this deliberate murder attempt as an “accident”.

These are the original videos that capture an overhead view from a cell phone, and the video below is the aftermath:

*Note: This article is being updated as new information becomes available.

** Hat tip to fellow Toronto blogger Tino at Bike Lane Diary for highlighting this unfortunate incident on Saturday morning – more than 48 hours before the mainstream media picked up the story.