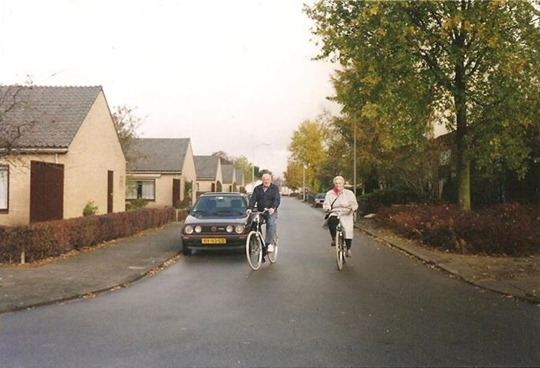 Oma & Opa on their bicycles on a visit home – Netherlands, 1990s / The Urban Country

My Mother’s parents were born in Ravenswaay in the Province Gelderland in the Netherlands. They both grew up on small farms across the road from each other in the 1930’s. The Germans invaded the Netherlands on May 10th, 1940 using their Blitzkrieg tactic under Field Marshal Fedor von Bock of Army Group B.

My Oma (Grandma) was 9 years old when the battle of the Netherlands ensued, and my Opa (Grandpa) was 14. The battle only lasted 4 days before the main Dutch forces surrendered, and Germany occupied the entire nation by May 17th, 1940.

I originally asked Oma for some photos of her and Opa on bicycles in the Netherlands for an article on bicycling, but after making further inquiries this post quickly turned into a story of my family’s history.

Oma tells me that the first few years of the war weren’t so bad:

“There were still things to buy in the stores, and we were living on the farm so we always had food. But the last couple of years, things ran out.

People in the cities were very hungry and many died. The German soldiers took everything we had, including our horses, and if you complained you got shot. They arrested many people and transported them to Germany to work in their factories.”

While speaking to my Opa about the war, he was more light-hearted about it. He used to tell me that he and his friends would take German soldier helmets, put them on a stick and elevate them over the hill on the dikes. The Canadian soldiers on the other side of the canals would almost immediately shoot the helmets – thinking they were German soldiers.

He always had a way with making light of an otherwise grim situation. He always told me that most of the German soldiers treated his family well and they didn’t want to be there any more than he wanted them to be there.

During the war, Oma tells me that there were no tires for their bicycles, so they had to cut pieces of old rubber and put them on the rims. She recalls how bumpy a ride it was during those days.

When Oma reached grade 6, the Germans took over her school and turned it into barracks to bunk the soldiers – so she was no longer able to attend school.

When the Canadian forces liberated the Netherlands, Oma & Opa’s part of the country was among the last to gain freedom from the Germans, so the occupation didn’t end until May 1945:

“After the war it took years before things got back to normal”, she told me.

In 1946, Opa was called to serve in the Dutch army and he spent 3 years in Indonesia from 1947 until Indonesia achieved independence in its National Revolution. He always told me he drove an ambulance in the army, but I suspected he was just saying this because he didn’t want to talk about his days in Indonesia.

In 1951, after Opa returned from Indonesia, Oma and Opa became engaged:

“After a few years of looking for somewhere to live and find work, we decided to emigrate to Canada. So on April 23rd, 1953 we got married and left Holland on May 29th, 1953 on a boat with 600 others for our journey to Canada!”

Oma shared some “chic” photos of her and Opa riding their bikes in the Netherlands on a visit during the 1970’s: 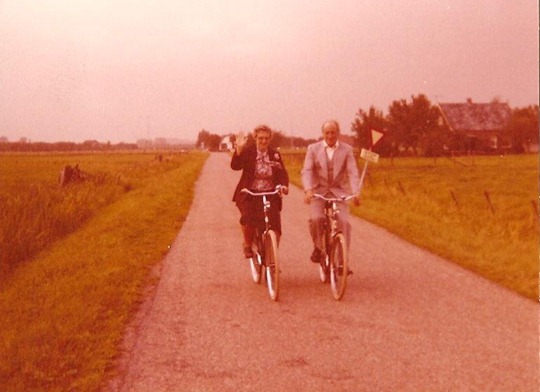 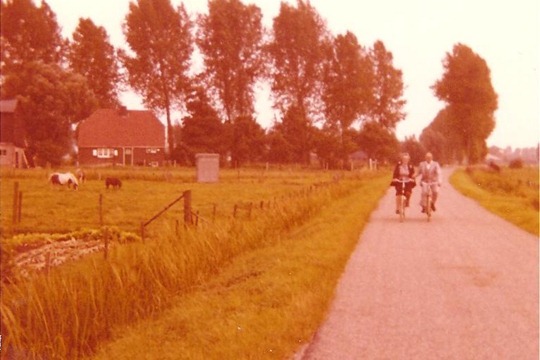 Oma and Opa lived a good life in Canada – raising 7 children on a farm near Guelph, Ontario. And 27 years after they came to Canada, I was born in Guelph General Hospital.

I was very close to my Opa while growing up – spending time on his farm and working with him in his wood workshop, and yes, riding his Dutch bicycle. When I was only 12 years old he let me drive his car too.

I still remember that first time I ever drove his car. I pressed the gas pedal down so hard that I squealed the tires. I remember thinking how much more powerful it was than my bicycle.

In October 2003 when I was 23, I took a bus to Guelph to spend the weekend with my Opa because my Oma had gone overseas to visit my Aunt. We had a great weekend together and caught up again after I had been busy with schooling and work over the years.

Just a couple weeks later – on Wednesday October 29th 2003 my Opa passed away peacefully in his sleep in his 77th year. I spoke at his funeral and posted it to this blog in 2005 (reposted here):

“Over the years, this man has taught me many things about life. He has taught me to enjoy life. To have a little bit of fun at everything I do. To make a joke, or pull a small prank. He liked to live his life to the fullest. When playing pool against him, I remember how he would block my cue as I was about to shoot. He always had that happy grin on his face. There was never a dull moment, never any sadness in his eyes. His eyes were always gleaming with joy. If he became tired, he would go take a nap. An hour or two later, he’d be up and at it again.

He taught me how important it is to eat a bowl of cereal in the morning. He always said you need to eat your Special K to get your “Get up and go”. He could always beat me in an arm wrestling match, no matter what his age.

He taught me not to be afraid of death. That when we die, we will go to a wonderful place.

He also taught me to be extremely careful when using a barbeque. Because as you all know, his barbeque caught on fire many years ago and burned off all his hair. Or so he used to tell me. That was the type of sense of humour Opa had. He always made us laugh.

And last but not least, the most important thing this man has taught me is how important it is to have a hero in your life that you will always remember. Opa is that special person in my life. When I look up into the stars at night, I can see him up there with a large grin on his face, giving me two thumbs up. He knows how much he means to me, and how much he will always mean to me. Some day we will meet again Opa. Thank you for being my hero.” 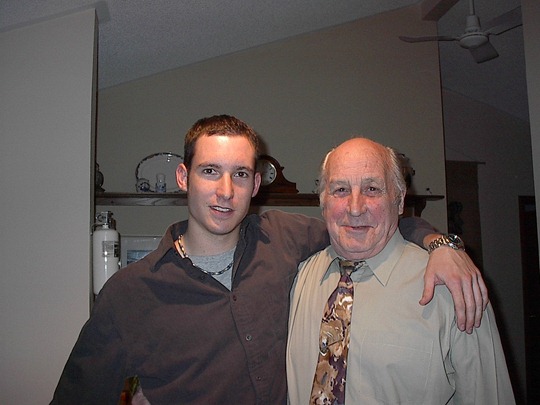 I really miss him.

11 thoughts on “My Dutch Family History”