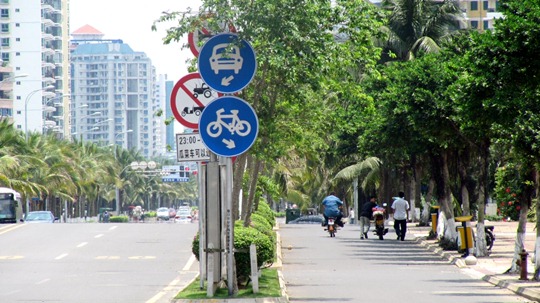 Only in countries without an established bicycle culture would you have bicycling advocates who would lobby *against* bicycle infrastructure because they feel our culture is so dismissive of bicycles as a legitimate means of transportation that it’s impossible for the infrastructure to ever be built properly.

I disagree with the notion that we can’t have proper infrastructure and that we would be better served by promoting vehicular cycling in order to grow bicycling.

Yes, vehicular cycling skills are important because there will always be situations where people on bicycles will be mixed with automobiles.

I agree with Mighk Wilson on many things, and I think his bicycle training program is great for promoting bicycling. But I don’t believe lobbying against bicycle infrastructure is helpful to our common cause, and is in fact detrimental to making progress.

I believe that bicycles should primarily mix with automobiles on calm streets in the city, but I think main arterial roads with busy traffic are better served with separated bicycle infrastructure.

Great infrastructure doesn’t appear overnight, but we can improve on our infrastructure incrementally over time – and several cities in North America are making progress.

Here in Toronto, even a painted bike lane – as imperfect as a painted bike lane is – is a step up from sharing a lane with automobiles on arterial roads. Vehicular cycling on arterials can be stressful – especially during the mad rush to and from the office. From drivers squeezing you to the curb, to them becoming angry when you take the lane, to getting stuck in a long line of traffic congestion with no space to proceed while breathing in the idling exhaust fumes.

At the very least, a painted bike lane lets you proceed beyond long lines of automobiles that sometimes move slower than walking speed – thus providing an incentive for people to use a bicycle. Most people I talk to here in Toronto tell me they use a bicycle to get around because it’s the fastest (and most inexpensive) way to get around the city.

In addition to pushing for improving our infrastructure, I do agree with Mighk that it is important to make bicycling seem normal and predictable. That means dressing in normal clothes, being predictable to motorists, and not making bicycling more complicated than it needs to be.

Mighk claims that the culture needs to come before the infrastructure.

A commenter recently remarked that bicyclists shouldn’t have their own traffic signals because they won’t obey it anyway, and that they disagree with contra-flow lanes. Nor should people be allowed to ride two-abreast, they said.

Here is another wonderful video from markenlei that in 3 minutes and 41 seconds shows that great bike infrastructure is achievable, that bicyclists can ride two abreast, that helmets aren’t necessary, and that talking on a cell phone while riding doesn’t have to be a big deal.

It is possible to design proper bicycle infrastructure that creates a comfortable, calm ride for people on bicycles. Here in Toronto we have at least one good bike path in the city for commuting from the west end.

Now all we need is more and more.