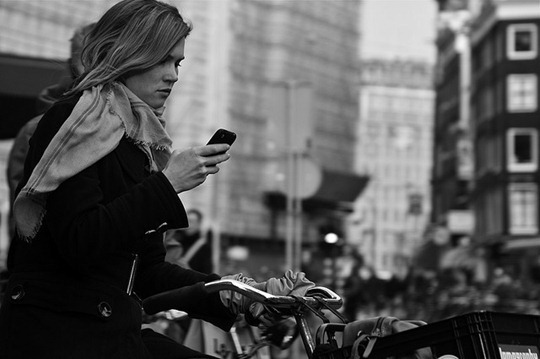 “Amsterdam, girl cycling from A to B, multi-tasking, like so many do” by Amsterdamize / RateMyVelo.com

You have heard it a million times before: Cyclists don’t deserve any respect on our streets until they obey all of the laws. The implicit message in this fallacy is that drivers have a right to be angry and be aggressive towards cyclists because some cyclists run red lights.

Perhaps the most troubling part about this statement is that it’s often made by cyclists themselves to other cyclists. The last thing cyclists need is other cyclists justifying road rage against cyclists based on some motorist utopian dream world where every cyclist puts their foot down at a stop sign before proceeding.

Given how popular it is to chastise cyclists in the mainstream media – while giving motorists a free ride – it was refreshing to see an article highlighting the hypocrisy of motorists who say cyclists don’t deserve respect on our streets until they start obeying the laws like motorists.

The Vancouver Sun ran the article entitled “Being driven insane – Does anyone observe speed limits?” The article begins:

“For the sake of your own edification, try an experiment I have been conducting for the past two months. Try it for a single day.

Drive the posted (maximum) speed limit. I don’t mean just on the highway. I mean everywhere – down neighbourhood streets, on major downtown arteries, through school and hospital zones. Especially try it during rush hour.

It isn’t easy. I’m not even sure it’s advisable. You will feel as if you were being pushed down a hallway against your will. A parade of cars will stack up behind you. Some will tailgate so closely as if to send you the message, via your rear-view mirror, “Hey, granny! Get a move on!” (Sometimes those tailgaters will be grannies.) Some drivers, angrily jerking their cars into the passing lane, will pull up beside you to get a look at the jackass ruining their day, then cast you a look of disgust before shooting off in an exclamatory burst of octane. The urge to speed up, if just to give into the peer pressure, will be overwhelming for you. After a day of this, you will come to the conclusion that you may be the only driver on the road observing the speed limit.”

The story goes on to highlight an important point that seems to get lost in the anti-cyclist rhetoric – the danger of speeding cars:

“Most drivers, however, recognized that speeding was the most significant cause of accidents collisions. More drivers than not also felt roads were becoming more dangerous.

But most drivers also felt that their level of speeding did not endanger anyone, despite numerous studies that show even a few kilometres over the speed limit increases the risk of an accident collision exponentially.”

Drivers feel their own speeding is justified, but at the same time feel that the roads are becoming more dangerous due to speeding.

Read the full article on the Vancouver Sun.

Our society seems to think it’s okay for drivers to speed, but if a cyclist doesn’t come to a complete stop at a stop sign it is grounds to be threatened by motor vehicles.

In an effort to improve road safety, the colourful professor Dr. Steven Fleming over at Behooving Moving proposes a novel idea: ban seatbelts from automobiles so that drivers will be more cautious to others around them.

“you can give someone a car that is 10% safer, and they will drive with 20% more abandon”

Thanks to reader Trevor Keen for passing the link to the Vancouver Sun article.