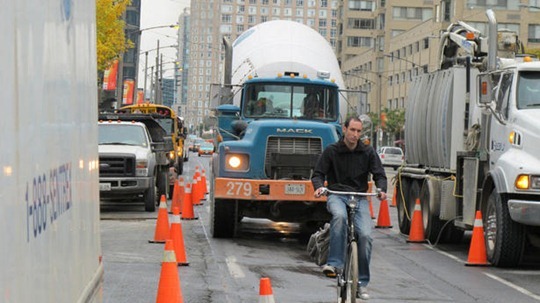 In July I posted a response to what I felt was an ill-written newspaper column which antagonized cyclists for their apparent blatant disregard for traffic laws. I felt the article only served to create more animosity on our streets and I thought the point could have been made without so many generalizations and disdain towards people who choose bicycles to get around the city in imperfect conditions.

My response was picked up by the newspaper columnist Jack Lakey, the article’s author, and through subsequent emails and phone calls it turned out we had more in common than perhaps we had first thought.

It turns out Jack had good intentions but wrote the article “based on a perspective formed in a driver’s seat”.

I invited Jack out to come experience our streets first hand on a bicycle. Jack’s column is after all called “The Fixer” column, and he is tasked with fixing problems in the city. So I thought it would be appropriate to show Jack the inadequate conditions in which cyclists have to deal with on a daily basis.

That was the original intention, anyway. It turns out Jack loved pedaling around the city so much that his article changed from being a typical “Fixer” column, to allowing him to profess his enjoyment for riding a bicycle in the city – something he hadn’t experienced before, and one that he couldn’t understand or appreciate while sitting inside an automobile.

So as luck would have it, Jack and I now have one more thing in common: we both love getting around our city by bicycle. But Jack just didn’t know it until now.

Jack puts it succinctly in his article entitled “Cycling a better way to get around than it looks”:

“The idea was to provide us with examples of the perils encountered while riding, and to show us the need for and advantages of infrastructure that makes cycling safer and more viable.

But an unintended consequence of our journey was soon apparent: Cycling is an immensely enjoyable way to get around, especially on a fall day when moderate exertion results in minimal sweat.

It promotes a sense of well-being and gets the blood flowing without leaving one gasping for breath, and allows riders to quickly manoeuvre through heavy traffic without adding to the queue of gridlocked vehicles.

Aside from the exercise, it creates a connection between the rider and the surrounding community in a way that drivers, who are sealed off by glass and steel, could never feel for themselves.

While stopped at an intersection, you can hear the conversations of people waiting for the green light. You can smell onions sizzling at a hot dog cart, read the signs pasted to a utility pole and observe things that cannot be seen from behind the wheel.”

Sometimes all it takes is a ride around the city for someone to truly appreciate the benefit of using a bicycle for transportation. We do it simply because it’s fast, and fun.

And what words of wisdom does Jack offer to other drivers who don’t think of bicycles as a legitimate mode of transportation?

“It was a revealing experience for a guy who had thought of bikes as more of a toy than a real vehicle, one that should be tried by any driver guilty of making the same mistake.”

Read the full article on the Toronto Star website