Wishing Death On Other Cyclists 87 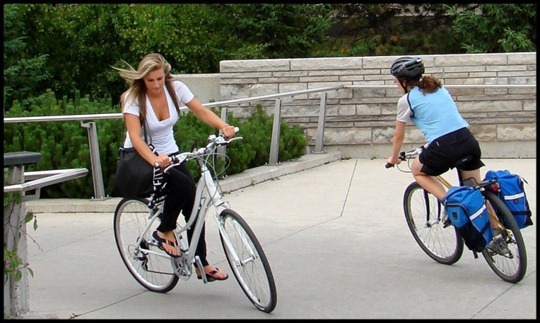 A couple weeks back I came across an angry rant about Critical Mass which featured a photo of scores of cyclists being plowed by an automobile with the caption “When is something like this going to happen in Chicago thanks to Critical Mass?”.

Angry rants against cyclists are common in the North American media, but normally they are written by motorists, not cyclists.

In this case, a man named Scott Rowan who dubs himself “The Urban Cyclist” wrote the angry rant against the Critical Mass ride which take place in cities all over the world just after rush hour on the last Friday of each month.

I won’t waste time going into any details about the asinine article which was clearly meant to promote the blogger’s book called “The Urban Cyclist’s Survival Guide” which sells on Amazon for $10.21.

Normally I wouldn’t bring any attention to a book written by someone who wilfully creates animosity towards people who use bicycles, but this is a unique case because of some bizarre language in the introduction of the book (the introduction is available for free).

In the introduction, Scott Rowan writes the following:

“At Clark and LaSalle I’m forced to stop my bike for the first time in more than three miles. As I catch my breath, three more cyclists pull up next to me. One guy has flip-flops on, audio ear buds in his ears, and no helmet. I instantly hope that natural selection will weed him out today, but say nothing. There are two other cyclists coagulating behind me – neither wearing a helmet; one has on headphones.”

At the end of his introduction, Rowan says that his book is written for cyclists who wear flip flops and ear buds:

But what about Mr. Flip-Flops or Miss Ear Buds? Their actions are not just irresponsible for their own safety. By breaking nearly all the rules of the road, they simply make things worse for other safe cyclists because they have made other motorists angry at cyclists for very good reasons. If I ride next to a motorist who has had a bad experience with a cyclist lately, the motorist is going to take it out on me, not the memory he has.

So this book is written for Mr. Flip Flops and Miss Ear Buds.

I find it so odd that someone would publish a book and wish death upon their target market.

Even the guy’s blogger profile is contradicting. In the profile he claims he “doesn’t “do centuries” or weekend races and you won’t find one expensive piece of cycling-specific clothing in his closet”. Meanwhile, his blogger photo he is wearing cycling jersey, with a race bib.

The guy is so bizarre and absurd that I am oddly fascinated and intrigued by him. It’s like watching a train wreck. 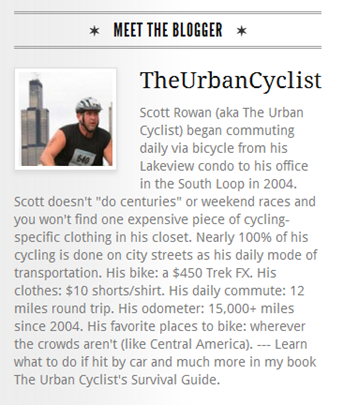 As you can see in his profile, he has been riding since 2004. In those 6 years of riding, he has been “hit by every kind of vehicle and nonvehicle there is“. He also says he has been levelled by a bike messenger, a jogger, a dog, and doored by a teenager.

Why would anyone pay money for a book to learn safe riding from someone who has had so many collisions? Not to mention the cover of the book shows a cyclist crashing into a car.

Here are a few excerpts from the book to spare you the agony of reading any more than you need to (though this is probably already too much):

“When the light goes green, I blast past the novices to establish position on the other side of the intersection where wide trucks driving past parked cars can leave too narrow an alley to ride through if you aren’t aggressive enough to establish position first. I hear honking behind me directed at one of the cyclists in my wake. I glance back to see the cyclist weaving back and forth as he tries to control the handlebars while starting from a stop, and I think how I can’t blame the traffic for honking the way it is. At the very least, this cyclist isn’t even strong enough to control his handlebars and acceleration, much less making himself a danger by wearing ear buds while riding.”

“I squeeze off the three cyclists at the next intersection. Normally I can relax at this point, coasting through the Gold Coast. However, I remember the bike messenger who levelled me a couple years ago when he was riding through here, and I tense up. He came out of nowhere, going the wrong way on a one-way street and plowed into me like a black rhino sending me ass over ears, flipping my bike.”

“That accident taught me as much as face-planting on the trunk of a taxi cab or the 5’4” female jogger who caused permanent scars on my hands and shoulder or a dog who cracked my helmet or the teenager who doored me with her Honda or… well, you get the idea. There’s something to learn from every accident, which means I’ve had plenty of opportunities to learn.”

The cycling world deserves better representation than for people to wish death upon people who wears flip flops and no helmets.

87 thoughts on “Wishing Death On Other Cyclists”