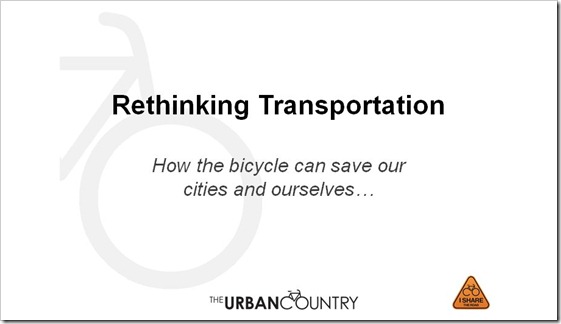 Today I presented my Rethinking Transportation talk to a group of 50 children at an elementary school in Toronto. The kids belonged to an “eco” group that meets once a month – their ages ranging between 9 and 12 years old.

I then showed them some videos of schoolchildren riding their bicycles to school in the Netherlands on a day with weather not unlike the weather we had today (~1 degree Celsius). There was unanimous consensus among the children that they would absolutely love to be able to ride their bicycles to school on comfortable bicycle infrastructure similar to that in the Dutch videos I showed them.

Then I went through a history of transportation in North America and explained that roads were not built for cars. After the brief history I highlighted some of the negative consequences of our addiction to cars as well as highlighting that even if cars didn’t have detrimental effects in our society, there still wouldn’t be enough space for everyone to drive a car.

I then explained some of the reasons why the Dutch embrace bicycling so widely by showing them well designed bike infrastructure and I exhibited my comfortable/sturdy Dutch bike. The children were shocked when I told them I rode my bicycle 13km to visit their school, and they were even more impressed when I told them that it only took me 45 minutes.

I ended the talk with 6 things these children can do to help make it more comfortable and safe to ride a bicycle in Toronto.

The children were very engaged and had plenty of questions to ask me. I had one girl volunteer to attempt to lift my bike to highlight how heavy and sturdy it is. I went through all the components included on my bike, explaining that with a Dutch bike you rarely need to oil your chain or worry about getting mud or oil on your pants.

The children were also fascinated by the rear wheel lock that comes standard on most Dutch bikes, making it convenient to park the bike anywhere without having to find a post to lock your bike to. Rear wheel locks are also common in China, but unfortunately they are very uncommon in North America since most bikes here are built for sport, not for transportation.

Several teachers were in the audience and I was told after the talk that it was “eye opening”. I was also glad to hear the feedback that I “spoke to the students instead of preaching at them”. Sometimes it’s hard to know if I’m preaching or speaking – in advocacy this can be a thin line.

My goal for this talk is to provide a different perspective that goes against our society’s normal (narrow) perspective on transportation. Our society has fundamentally accepted that cars are a necessity and have resigned ourselves to be dependent on cars for even our most basic transportation needs.

When I return in May 2012 from living overseas I plan to give more of these talks at other schools.

I hope to help change our narrow view with this talk, or at least challenge conventional wisdom and give the audience something to think about.

I have another version of the talk for an adult audience that focuses more on the ills of our car culture and the financial/societal costs of our driving addiction. If you know a group of people who would benefit from hearing this talk, feel free to contact me to make arrangements.