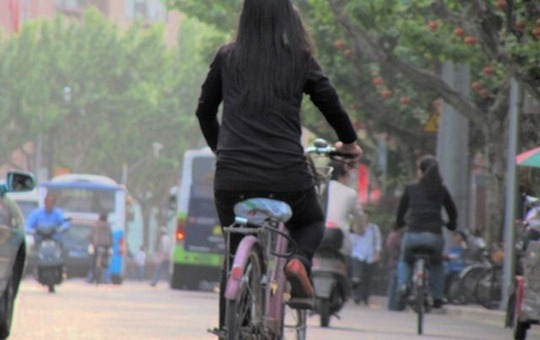 Cyclist in Shanghai – Photo by James Schwartz / The Urban Country (2010)

As a Canadian ex-pat currently residing in China, there are moments where my culture and values clash with Chinese culture. A recent situation at a dinner with my wife’s family and friends surfaced the importance placed on car ownership in Chinese culture. I will get to this.

Last week I had a friend drop by for 5 days after after he became stranded in Hong Kong when his work trip to the United States was cancelled. During those five days we spent at least 2-3 hours each day exploring the city by bicycle.

The Chinese tend to be very forward and blunt compared to people in North America, so there were several situations where locals blatantly laughed at us for riding bicycles.

In one such situation, a group of guys in their early twenties laughed when we were leaving a bar on our bicycles, and made a comment in Chinese which roughly translates to:

“haha, those foreigners have to rely on their bicycles to get to the bar”.

As someone who has visited China twice before, these situations are not unexpected, and don’t bother me insofar as it pertains to being embarrassed about riding a bicycle.

However, the part that bothers me is the fact that people’s first instinct here when they see someone on a bicycle is to presume that they are too poor to afford any other mode of transportation.

If the perception that “people who use bicycles are poor” prevails in China, bicycling will become extinct as a mode of transportation as China’s wealth increases.

There are two things that can save bicycles as a viable mode of transportation in China. The first, ironically, is car culture itself. Increased traffic congestion – in a country with more than 160 cities with populations exceeding 1 million people – will give people a reason to start using bicycles again (or electric scooters as is the case here in Haikou).

The second thing that can save bicycles is changing the perception that bicycles are just a mode of transportation for the poor. This is much harder to do, as I have found.

While eating dinner with my wife’s family, a prominent well-to-do friend of the family asked my wife how many cars we have back in Canada. The question was not, “Do you have a car in Canada?” or “What kind of car do you have in Canada?”.

The assumption was that we obviously owned a car. Thus, the question was, “how many cars do you own?”.

I felt not embarrassed for myself, but status and success (measured by wealth) is important in the Chinese culture, so if someone doesn’t own a car, they must not be very successful.

My wife’s father graciously and supportively explained our reasoning for getting rid of our car. I couldn’t ask for a more supportive father in law and I am grateful that he helped defend us. My inadequate Chinese language skills unfortunately prevented me from explaining my perspective.

Somehow I think the explanation was futile. The damage had been done. We had clearly disappointed the family friend and there was an awkward silent moment where it was obvious that he was disappointed.

Don’t get me wrong, the man who asked this question is an extremely kind and genuine man, and I don’t fault him whatsoever for asking this question. We are all just products of our culture and it’s easier to go along with the culture than to question it or rebel against the culture (as I have done within Canada’s car culture).

Had I been able to respond, I would have explained that we live close to work, we can walk to hundreds of restaurants in downtown Toronto, and we have access to five brand new cars on our doorstep that we can rent by the hour anytime we want to using Toronto’s Autoshare car sharing program. If we need to leave the city for a weekend, we have a number of rental car options.

I also would have explained that I can get to my destination by  bike faster than driving a car 8 times out of 10 in downtown Toronto, and that I enjoy being outside and getting some exercise after sitting on a computer for 10-12 hours a day rather than being stuck in a car.

I might also have mentioned that by ridding ourselves of our car, we are saving $8,000 every year (~48,000RMB) that we can put towards our daughter’s education fund.

I would have also showed him video footage from the Netherlands to explain to him how liveable and pleasant so many European cities are because they went against car culture rather than embracing it.

One day China will evolve – especially after the car culture brings Chinese cities to a grinding halt – and the Chinese will have a better appreciation for a more humble, pragmatic, simple existence that holds less importance to status and material possessions.

In the meantime, I will continue to pedal around this Chinese city with a smile on my face, and perhaps I will convince just one Chinese person that bicycling is a great way to get around for both poor people and wealth people – and everyone in between.