The Car Once Symbolized Freedom… 49 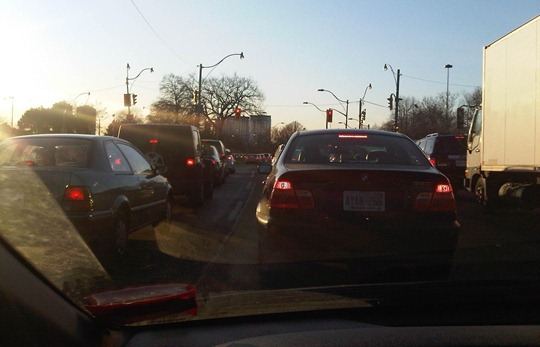 Motor cars were once a symbol of freedom – a way to achieve personal independence. They took us places where we couldn’t otherwise travel – they brought us to our destinations faster, and we didn’t need to abide by a schedule or rely on anybody else to become mobile.

Things have changed. We took it too far. The freedom of mobility that made cars so desirable is exactly what now makes cars so undesirable. Too many of us wanted that freedom. Too many of us bought inexpensive real estate in places that depended on motor vehicles even to buy a carton of milk.

And since so many of us became hooked on cars, so too did our elected politicians, who exploited the political opportunities, driving our government to become the primary sponsor and endorser of car culture. Extensive government subsidies (I call it Motorist Socialism) have made driving affordable for the masses, and taking away those subsidies is like trying to take heroin away from a heroin addict.

Shortly after taking office, Toronto’s newest mayor immediately eliminated the personal vehicle registration tax, removing $60 million from the city’s revenue stream. He then came back with proposed cuts to libraries, swimming pools, and raised public transit fees in order to ensure car owners wouldn’t have to pay the measly $60 per year (even though public transit users have to pay $1,512 per year for the privilege to use the city’s public transit system).

North America’s love for the car and large government subsidization resulted in the masses flocking to cars. So much so that driving is now considered to be a birthright in America – even minimum-wage earners often feel entitled to car ownership. It is not uncommon to hear stories about people who are out of work and living on government assistance who are devastated that they might have to give up their car.

But making driving so affordable is also what makes it so inconvenient. Our roads are often overly congested because there are just too many cars, and the thought of having freedom and independence has become but a dream that is cultivated by car commercials that feature unrealistic empty streets, fast cars, and nature.

That’s why living in cities and using public transit and/or bicycles has become the new path to achieving the freedom that past generations desired by flocking to motor vehicles. Freedom from traffic congestion, car loans and from being vulnerable to fluctuating oil prices.

“Any man who rides a bus to work after the age of 30 can count himself a failure”.

In many places of the world, that quote is still widely believed to be true. That a car is a symbol of success and if you don’t have a car you are a failure.

I just returned from Hong Kong, exploring the former British colony for six days. Although Hong Kong does not accommodate bicycle transportation well, getting around Hong Kong without a car could hardly be easier. Hong Kong’s public transit system is one of the top systems in the world, so it’s no wonder 90% of Hong Kong residents use public transit – with passengers ranging from multi-millionaires to the low-income working class.

In the Star article, Christopher Hume talks about the changing demographics when it comes to how we think about cars:

“No wonder getting that car is no longer the first thing on the mind of every kid who’s about to turn 16. For those lucky enough to live in a city, especially one with decent transit, the prospect of life without wheels offers the same promise of liberation that car ownership did decades ago.

Once the great symbol of individual freedom and personal mobility, the car has become a ball and chain. Slow, expensive and surrounded by endless others, automobiles have taken us as far as they can. At this point, there are so many vehicles on the roads, they exist in a state of perpetual congestion”

Car ownership has indeed become a ball and chain. Perhaps some day the American dream of freedom and mobility will involve a bicycle or a world-class transit system.

Until this happens, this website will continue to exist.

*Editor’s Note: The original version of this article included the statement “even minimum-wage workers can often afford their own cars”. This was more accurately re-worded to read “even minimum-wage earners often feel entitled to car ownership”.

49 thoughts on “The Car Once Symbolized Freedom…”