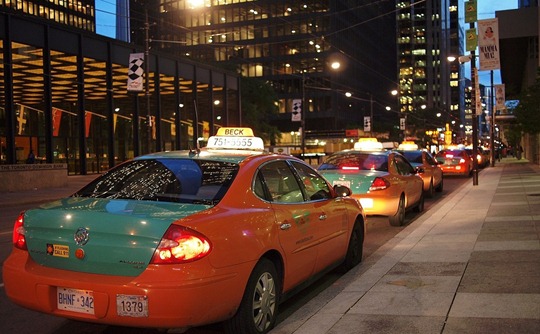 Last week a Toronto taxi driver was charged with second degree murder after 28-year-old Ralph Bissonette was killed on a longboard (a surfboard-style skateboard) in what appears to be a result of road rage.

As reported by the Toronto Star:

“What occurred is still under investigation, but surveillance video seized by police shows words being exchanged as cab and longboard wheeled along King St., neither going very fast.

The footage captured Bissonnette travelling in the curb lane, close to the passing lane, making hand gestures at the cabbie, “but not flipping the bird,” a police source said, referring to the middle finger.

Witnesses told police the taxi suddenly veered into Bissonnette’s lane and mounted the curb. At least one witness reported seeing the taxi strike Bissonnette then drive over his lower body, police said.

“Somebody lost his cool,” a police source said.

This morning the Toronto Sun newspaper is stirring the pot in an article entitled “Cabbies gripe about T.O.’s streets”.

In the article the Toronto Sun claims “drivers are sick of pedestrians, cyclists and boarders of all descriptions ignoring even the most basic road rules and putting lives in danger.”

Unfortunately the article doesn’t attribute the quote to any driver in particular, so it’s hard to say if this is a conclusion the newspaper is coming to itself or if drivers actually do believe that their lives are in danger because of pedestrians, cyclists and boarders.

The article also doesn’t mention that cyclists, pedestrians and boarders feel that their lives are in danger because virtually all drivers ignore even the most basic rules of the road (like posted speed limits for example).

No matter who made the claim, it’s preposterous to conclude that pedestrians, cyclists and skateboarders are putting drivers’ lives in danger.

Let’s remember that it was a longboarder who was killed (murdered, allegedly), not the taxi driver. It was the taxi driver who allegedly drove into Bisonnette and drove over his body before he died.

Unless Bisonnette was carrying a loaded weapon on his longboard, it would be extremely difficult to come to the conclusion that he was putting the taxi driver’s life in danger by being on the road.

The Toronto Sun article goes on to quote a taxi driver who further blames the skateboarder for his own death:

“Skateboarders should stay off the streets,” insisted Jerome Salim, a taxi driver in Toronto for seven years.

“It’s just not safe to zig-zag on your skateboard down streets filled with cars, buses, and even bicycles,” added Salim.

Indeed, it’s not safe to use a longboard on the streets if there are madmen taxi drivers who are trying to kill you for the simple reason that they don’t think you belong on the streets.

It is very disturbing that people would be willing to justify or defend a murder even if the victim wasn’t supposed to be on the street in the first place. This would be akin to a cyclist shooting a driver in the head for driving without a proper license plate.

Yet people are willing to defend road rage murders when a car is used as the weapon. Perhaps people feel empathy for the taxi driver because they too have been full of rage while sitting behind the wheel.

I suppose it’s much easier to blame the dead man for his own death instead of trying to understand what went wrong and how we can get to the root cause of the animosity on our streets.