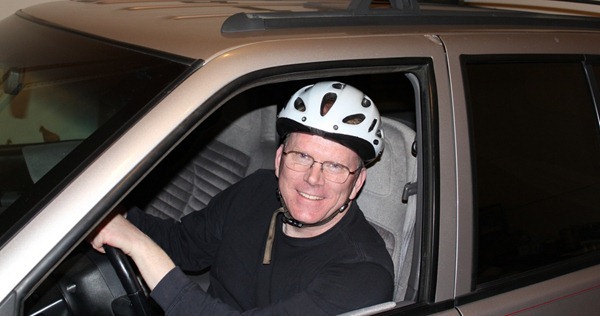 We thought it would be appropriate to swap the word “bicyclist” for “driver” to make the case for mandatory driving helmets:

Requiring adult drivers to wear helmets makes so much sense, we’re amazed it isn’t already the law in Ontario.

A study by Transport Canada found that 100% of the 14,000 Canadians who died in motor vehicle collisions from 2005 to 2009 weren’t wearing helmets.

“Helmet use by all drivers can and will decrease fatal head injuries,” said deputy-coroner Dan Cass.

He also cited a U.S. medical study which found helmets would have reduced head and brain injuries by an estimated 64% to 88% in 900 annual fatalities. Mandatory driving helmets are not a new idea. They’ve been the law in Ontario for car passengers under 18 since 1995.

And yet, incredibly, some motorists (not all) complain mandatory helmets will deprive them of their “rights,” sounding for all the world like motorists who opposed having to wear seat belts, when that was introduced in Ontario in 1976.

In the real world, driving a car or riding a bike on publicly-funded roads is a privilege, not a right, and comes with responsibilities.

One of those is to take reasonable steps to protect oneself from injury.

Motorists have a special obligation to look out for bicyclists and pedestrians on the road, given that in any accident between a driver and a bicyclist or pedestrian, it’s the latter two who are going to lose, regardless of who was technically “in the right.”

For that reason, the coroner’s report makes a number of other sensible, longer-term recommendations to better separate cars and bikes on our roads.

Finally, there is no substitute for attentiveness, patience, good judgment and common sense by everyone who uses the roads — motorists, cyclists and pedestrians — when it comes to reducing accidents.

But mandatory driving helmets are a “no-brainer” for motorists.

In an ideal world, drivers who are too stupid to know that wouldn’t be allowed on our roads, particularly since they tend to be the same, arrogant, self-entitled jerks who also think it’s their “right” to ignore stop signs and red lights, cut across traffic without signaling and run over pedestrians on the crosswalk.

But since many don’t, a law is required.

All three parties in the Legislature should pass one as quickly as possible.

Read the original article on the Toronto Sun.