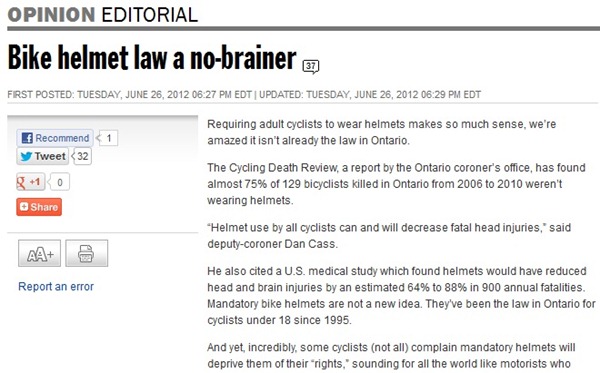 The title of this post may aptly describe whomever was in charge of the editorial desk for the Toronto Sun newspaper on Tuesday evening.

The Toronto Sun posted an “opinion editorial” entitled “Bike helmet law a no-brainer”, which appears to be more of a childish diatribe than anything that resembles a news editorial.

There are so many things wrong with the article that I don’t know where to begin.

Apparently bicyclists who don’t think that bike helmets should be mandatory are “stupid, arrogant, self-entitled jerks”. From the editorial:

“But mandatory bike helmets are a “no-brainer” for cyclists.

In an ideal world, bicyclists who are too stupid to know that wouldn’t be allowed on our roads, particularly since they tend to be the same, arrogant, self-entitled jerks who also think it’s their “right” to ignore stop signs and red lights, cut across traffic without signaling and run over pedestrians on the sidewalk.”

The article also argues that bicycle helmets should be mandatory because “75% of 129 bicyclists killed in Ontario from 2006 to 2010 weren’t wearing helmets”.

Using that logic, fire suits should be mandatory for motorists because 100% of motorists who burned to death inside automobiles from 2006 to 2010 weren’t wearing fire suits.

And as a commenter aptly points out:

The statement that “75% of 129 bicyclists killed in Ontario from 2006 to 2010 weren’t wearing helmets” is a red herring.  Its a bit like saying 90% of motorists killed were wearing seatbelts so we should pass a law requiring people not to wear seatbelts.  Correlation does not imply causation.  Where are the statistics that show how many died of head injuries compared to how many died of other injuries?

The editorial compares mandatory bicycle helmets to seatbelts. It fails to mention however that automobiles are dangerous, fast-moving killing machines that require these safety devices, whereas bicycles are inherently safe.

Perhaps the only line in this editorial that makes any sense is:

The coroner’s report makes a number of other sensible, longer-term recommendations to better separate cars and bikes on our roads.

The rest of the drivel in this shocking editorial reads like a bad joke written by an adolescent. It’s hard to believe people are actually paid to write this nonsense.