Lawyer On a Bike: Interview with Ian Flett 53 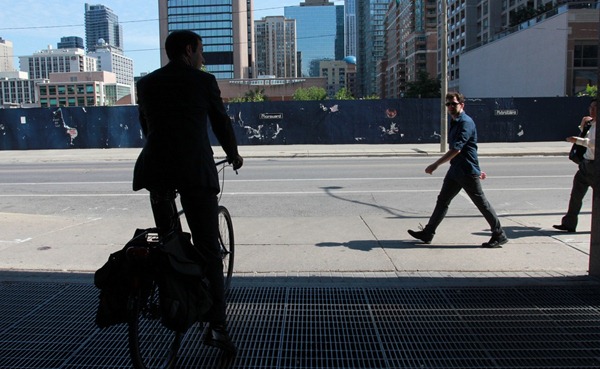 Half a world away lies a land where troves of business men and ladies gracefully pedal their way to and fro their places of business. In business attire, they dress for the destination, not for the ride. But this isn’t Amsterdam or Copenhagen. This is car-country Canada, where only 1.4% of the population commutes by bicycle.

Although it is becoming more common to see citizens in regular clothes using bicycles for their daily transportation here in Toronto, it is still the norm for most citizens to drive cars, take taxis or ride public transit to work.

Lawyer Ian Flett represents a growing faction of urban professionals who choose to ride bicycles to the office each morning without dressing in “cycle gear” and without requiring a shower at the office.

Ian has his own law practice which focuses on municipal, criminal law and mediation. His interest in municipal law is rooted in his interest in “cities and urban design”. Prior to becoming a lawyer, Ian was a reporter/videojournalist/producer for the Canadian Broadcasting Corporation (CBC) for 9 years.

We interviewed Ian to highlight his experiences bicycling around Toronto and perhaps inspire other urban professionals to consider choosing the most convenient, elegant and fun mode of transportation: the trusty commuter bicycle. 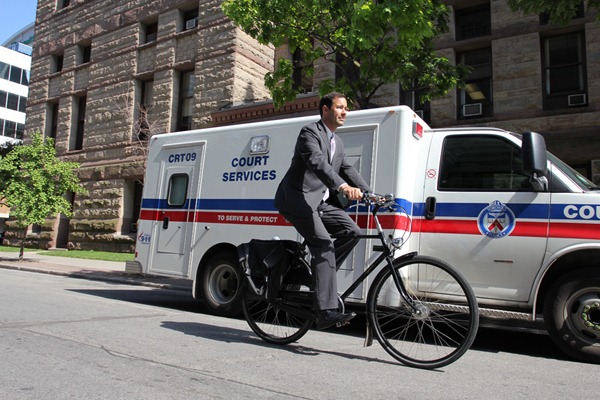 How long have you been using a bicycle for transportation in Toronto?

I’ve been riding bikes for transport since I was 12; I’m 36, so 24 years. I’ve used my bicycles in every city I’ve lived in: Paris, London, New York, Saskatoon, Ottawa and Montreal. The one exception is when I lived in Brandon, Manitoba: that was truck country and I was unashamed to drive one there. I moved to Toronto in 2009 and I’ve only used bicycles to get around here.

I grew up in Winnipeg where there are two beautiful rivers flowing through the city. I used to ride my bike along the monkey trails throughout the forests along those rivers and explore from dawn to dusk. I have always associated cycling with freedom, it gave value to the independence I had as a boy. I feel the same excitement today getting on my bike to go anywhere.

Do you ride year round?

I’ve ridden throughout treacherous winters in Saskatoon and Winnipeg, so winter riding in Toronto is a breeze!  I always argue the real challenge with winter riding is staying cool and being very visible, motorists don’t always expect to see us in the winter. 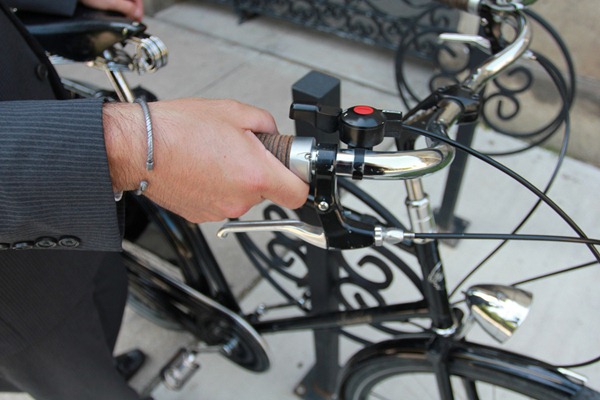 What does your typical cycling attire consist of?

I live and work downtown, I’m a ten minute bike ride from 7 courthouses, the OMB and City Hall. This means I have the luxury of riding my bike to courts and tribunals. So, I’m very often riding my beautiful Pashley Roadster in my suit.

If I’m appearing at the Superior Court I ride to court in my fancy court shirt and vest. Regrettably, it’s not appropriate to wear our legal robes on the street, but I’ll admit I’ve often imagined robes flowing in the wind behind me would look awesome.

Why do you choose to ride without a helmet? Are you criticized for this decision?

My friends and family certainly challenge my decision not to wear a helmet. And I am strangely most frightened of the consequences of a minor concussion or brain injury. I may reconsider if I become a father, especially when the statistics indicate how important it is to use helmets.

However, I believe my riding habits are defensive enough to keep me safe from most collisions, so I think of it as a calculated risk. My head is strangely shaped and I find helmets uncomfortable to wear. From a public policy point of view, I’ve now experienced more cyclists make safer roads. So, I fear mandatory helmet use would discourage many riders and lead to an overall decrease in cyclist safety. Ultimately, helmet use is a personal choice. People are smart, they can make up their own minds.

I feel very lucky to live in an old art deco apartment building near Bay and Bloor. My commute is never longer than 20 minutes, and that’s only if I’m meeting a client someplace at the edge of the downtown core. I appear a lot at Old City Hall, so I usually bomb down Bay Street quite comfortably without building a sweat and then jump into court with all those wonderful biking endorphins coursing through me. 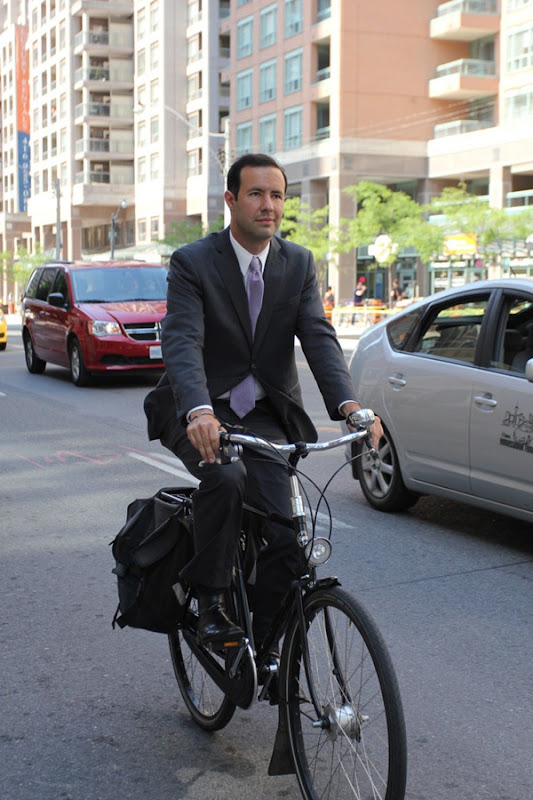 Do you feel there is a lot of animosity on the streets in Toronto?

When I first arrived in 2009 I found motorists and cyclists were very aggressive towards each other. I think this was the beginning of the destructive “war on the car” rhetoric and using the road felt like defending territory. I’d get honked at for taking my lane, other motorists would cut me off and squeeze me. It was frustrating and it seemed that every week I was involved in some sort of dispute with a motorist (I’m a very defensive rider and I don’t hesitate to assert myself).

I believe the war rhetoric played a big part in the belligerence that caused Allan Sheppard’s death. I didn’t understand how two road users, who in any other circumstance would likely act with courtesy and civility towards each other, should approach sharing the road with such hostility. The whole episode caused me grief and I thought about how my actions on the road could either contribute to that hostility or defuse it.

In the summer of 2010 I began to find motorists gave me much more respect and courtesy which I then extended in turn. Toronto cycling guru Yvonne Bambrick suggested this was due to more cyclists on the streets and motorists adapting to us, another friend suggested my riding style probably adapted. I agree with both and find I very rarely encounter hostility now.

More often I ask fellow cyclists not to go through red lights and ignore traffic rules. Riding recklessly really undermines our legitimacy and gives motorists a reason to question our claim to the streets.

What advice would you have for somebody who is thinking about using a bicycle for transportation in Toronto?

The other day I was sitting at a cafe and watching bicycles go by. I realized that from the point of view of a pedestrian or driver bicycling looks really precarious! This is especially true on roads like Bloor or Bay.

First I would say it is not as intimidating as it looks. If concern for safety is an obstacle, stick to routes where there are many cyclists. Be visible by taking your lane, signal your intentions. I think it’s important to pedal consistently; I think this sends some sort of subconscious signal to motorists that makes them respect you more. Get the most comfortable bike you can find. Take the Can-Bike course to become familiar with some simple strategies that make all the difference in the world. 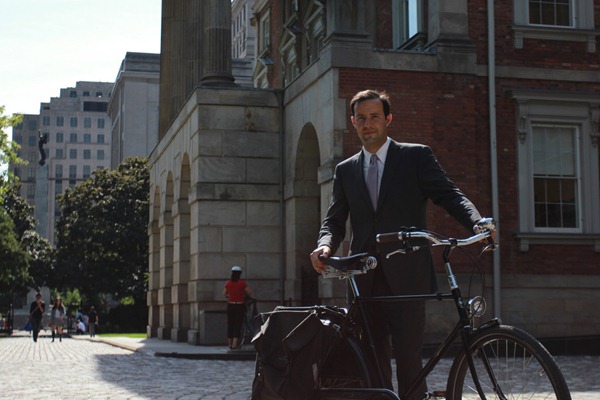 Despite the glacial pace of bicycle lane construction in this city, it is actually a great bicycling city. It’s reasonably flat, there’s lots of room to lock bikes (most of the time) and I believe Torontonians, whether on bikes or in cars, really want to co-operate and share the roads.

But separated bike lanes would help alleviate some of the fear people who hesitate to ride might have. They would also make life a lot easier for those who wish to continue motoring.

The other big issue for me is connecting existing bicycling infrastructure. One of our city councillors said bicycle lanes should only be built if they go to specific destinations; I can’t agree with this. Road-users on bikes need to feel free to plan routes that offer safety and consistency. He ignored a basic principle: We’re all entitled to feel safe navigating our city’s streets. 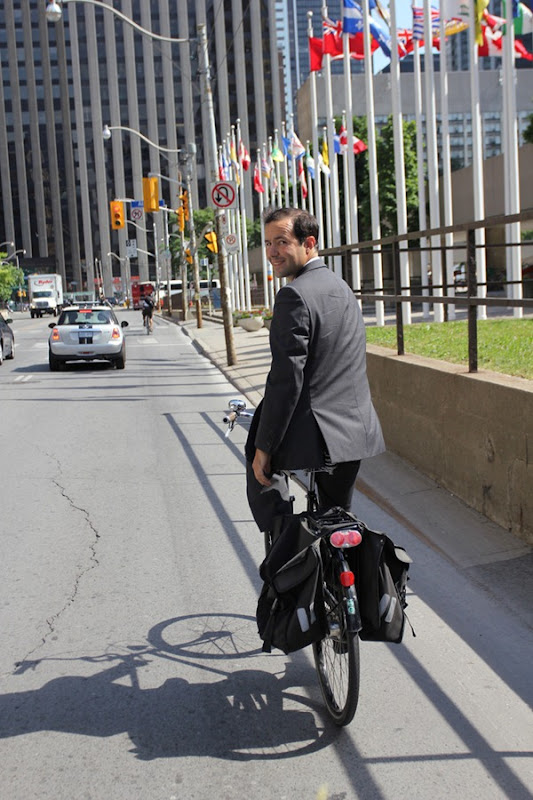 Thanks Ian for sharing your experiences and insight with The Urban Country, and thanks Yvonne for taking the wonderful photos. To view the entire photo shoot, go to Yvonne’s Flickr set.

53 thoughts on “Lawyer On a Bike: Interview with Ian Flett”