Getting To The Airport By Bike 65 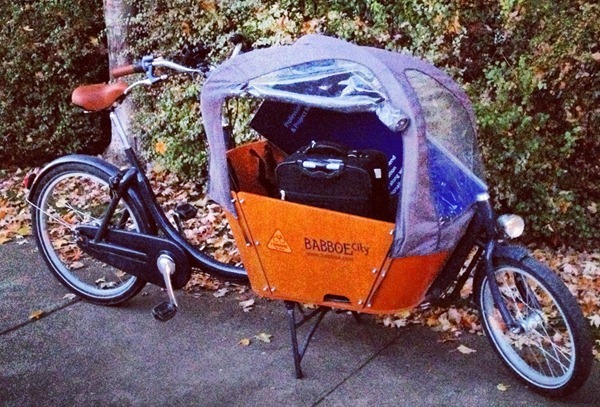 I fly out of town for business approximately once every month. There are many different ways to get to the airport from my home downtown. I normally take public transit, but will occasionally take a taxi if I am running late or if I have an early morning flight.

I have been longing to ride my cargo bike to the airport every since I purchased it back in May. My luggage fits perfectly in the cargo box and I could certainly use some extra exercise since I have gained about 15 pounds since I returned from living in China in May.

I looked at a few different routes to the airport, and decided that safety and comfort would be my number one priority. I ended up choosing a route that added about 5 kilometres to the trip, resulting in a total distance of 27 kilometres.

My flight was scheduled to depart at 9:35PM, so I figured giving myself two hours for the trip would be plenty of time.

I left my house at 6:40PM and headed down the bike lane from my home towards Toronto’s waterfront bike path.

As I pedalled along the waterfront, the sun was setting in a spectacular fashion, the rays of light sparkling on the lake, and the shapely clouds hovering just above the waterfront buildings with a bright orange backdrop.

The waterfront trail was extremely pleasant, smooth, and fast. Cars were nowhere near me, there wasn’t a single pothole, and there were no intersections that required me to stop for the entire first 8 kilometres. 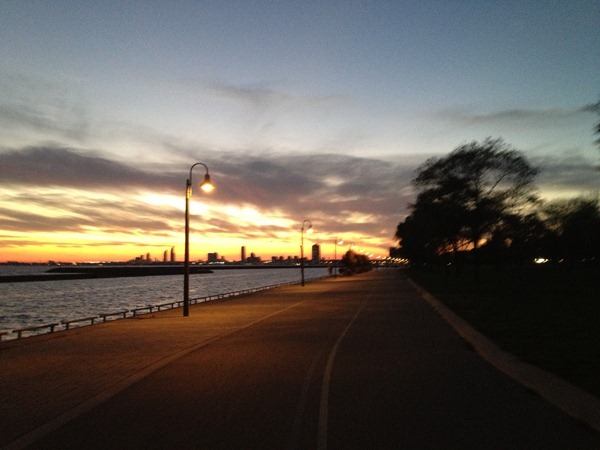 After departing from the wonderful waterfront trail, I ended up riding in a bike lane on the wrong side of the road (The Queensway). There was no way I could have crossed to the right side of the road without backtracking a couple kilometres unfortunately, so I stuck with it for about a kilometre.

Luckily, it was one of the few bike lanes in Toronto that had a painted buffer between the bike lane and the cars.

I then ended up traversing through some neighbourhood in Etobicoke and then rode along a narrow bike lane on a generally comfortable street (Royal York) for about 5 or 6 kilometres.

This leg was generally fairly comfortable aside from having to ride the wrong way briefly at the beginning.

This next leg of the trip was extremely pleasant. I pedalled along the relatively new dedicated bike path along Eglinton Ave.

This path is completely separated from the suburban road with fast-moving cars and it provided another smooth and quick ride; not too unlike the wonderful ride along the lake.

Back in 2010 – before I become a father and had a bit more time on my hands – I posted a video featuring this path and how it was so close to being an example of a great suburban bike route.

The smooth, dedicated portion of the path eventually ended and it turned into a pedestrian/bicycle shared path for the remaining couple kilometres. Although this portion was a bit bumpier I still wasn’t forced to ride on the busy road or on the sidewalk.

The final 3 kilometres proved to be, as expected, an uncomfortable end to an otherwise pleasant journey.

I stuck to the sidewalk along the road that approached the airport. There wasn’t a lot of space, cars were moving fast, and the sidewalks were completely empty. It was dark outside and I assumed drivers wouldn’t be expecting to encounter a bicyclist near the airport, so I took this precaution to stay safe.

I could smell the jet fuel from the airplanes as they flew very low over my head as I became closer to the airport. I felt so close, but I knew I was still about three kilometres away from my terminal.

The sidewalk suddenly ended, and I was forced to ride in the right lane on a narrow two-lane road. When cars approached from behind I would pull over on to the soft gravel shoulder. I wasn’t about to take any chances.

The soft shoulder eventually turned into pavement which provided a comfortable ride, but the closer I got to the airport, the worse the traffic and roads became.

The problem with the roads near the airport is that cars are just getting off the highway, so I seemed to be the only one travelling less than 80km/h.

In order to get to my terminal I had to cross four lanes of fast-moving cars. I felt like I was playing a game of Frogger, but fortunately I wasn’t in a hurry so I waited long enough until there was enough of a gap for me to cross.

Then as I was approaching my terminal something bad happened. I was riding on the right shoulder when all of the sudden the road I was on merged with another two-lane road to my right.

I was now stuck in between two roads with dozens of cars racing past each side of me. I now had a choice: Stop and back up, shit my pants, or take control.

I opted not to shit my pants. That wouldn’t make for a very pleasant flight. So I stuck my right arm out as far and as assertively as I could, and forced two lanes of cars to stop for me. Fortunately the drivers were very polite and applied their brakes and then flashed their lights for me to proceed.

So I crossed those two lanes of traffic and got over to the right shoulder where I continued to ride right up to my terminal while shaking my head at the airport for providing such a terrible experience for bicyclists. Shame on them, I thought to myself.

I couldn’t help but think about the bike lane that I saw leading to the Vancouver airport and wished Toronto had the forethought to provide this as well. If not for passengers, then at least it may encourage the thousands of employees to ride to the airport.

I found a quiet corner near the entrance of the terminal and parked my bike there, locking the rear wheel and using a cable lock to tie it to a railing.

The bike of course drew some attention so after having a conversation with a security officer about the bike, I asked him to take a photo of me.

I made it through security in less than 10 minutes and ate some food before proceeding to my gate.

Aside from the incident near the end of the trip, I very much enjoyed the trip and will happily do it all over again in the future. 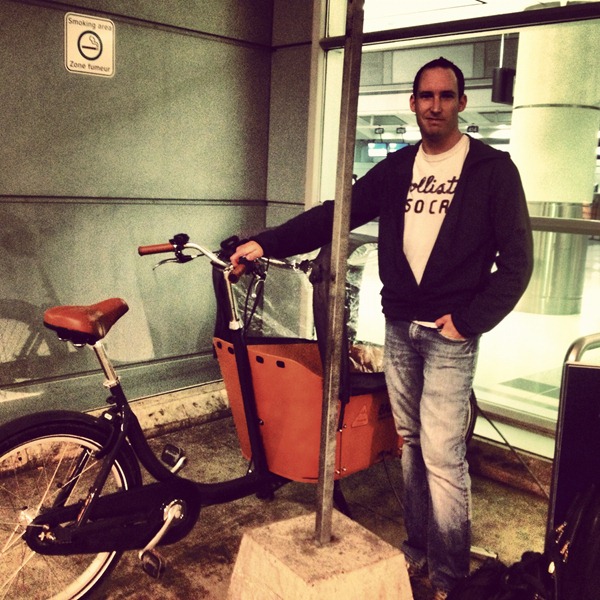 65 thoughts on “Getting To The Airport By Bike”