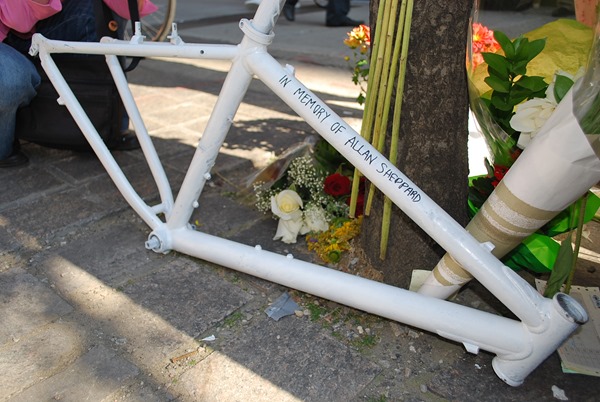 In Memory of Allan Sheppard – Photo by Tsar Kasim

New details have emerged through a Freedom of Information request regarding the August 31, 2009 death of Darcy Allan Sheppard. Sheppard’s father claims the evidence he has obtained through the freedom of information request does not support the explanation in the decision to drop charges against the man who killed his son.

On August 31st, 2009, Darcy Allan Sheppard was killed on his bicycle after an altercation with former Ontario Attorney General Michael Bryant. Special prosecutor Richard Peck was brought in from Vancouver to avoid the appearance of a conflict-of-interest, since Mr. Bryant had appointed many of the judges and prosecutors in Ontario.

Prosecutor Peck made the decision to drop the charges on Mr. Bryant, heavily relying on Mr. Bryant’s statement which seemed to strongly contradict evidence that was available at the time.

The police had tested the victim’s blood alcohol level but had failed to bother testing Mr. Bryant to see if he had been drinking (Mr. Bryant has since confessed to being an alcoholic in a book that he published after the incident).

Mr. Peck had also identified prior altercations that had occurred with Sheppard and other motorists over the previous month, claiming his aggression towards motorists was escalating.

At the time, Sheppard’s father Allan had accepted the dropped charges. But over the years Allan Sheppard Sr. worked through a Freedom of Information Access request to uncover the documentation that Peck would have had access to in order to make his decision.

Mr. Bryant had been charged with criminal negligence causing death and dangerous operation of a vehicle causing death after an August 31, 2009 incident involving Sheppard (Jr.).

“I reluctantly accepted that decision,” Sheppard (Sr.) says. “Given the circumstances and my son’s background, getting a conviction would have been difficult. But I emphatically reject Mr. Peck’s explanation of his decision. Information obtained through freedom of information access does not—and cannot—support the exoneration implicitly given to Mr. Bryant by Mr. Peck. The documents say my son and Mr. Bryant were both responsible for what happened.”

Read the press release here or view the documentation here:

More details will be added as The Urban Country combs through the documentation. Stay tuned.